Birmingham missed one penalty in the first half and scored another in the 91st minute to beat Swansea 1-0 and significantly boost their chances of Championship survival.

The visitors should have been behind at St Andrew’s when Blues striker Lukas Jutkiewicz saw his penalty saved by Swans goalkeeper Freddie Woodman after Jonathan Leko had been fouled (32).

Following defeats to Bournemouth and Cardiff prior to the international break Steve Cooper’s men failed to score for the third game in succession and had their hopes of reaching the automatic promotion places greatly reduced when Scott Hogan slammed in a spot-kick of his own in the dying embers (90+1). 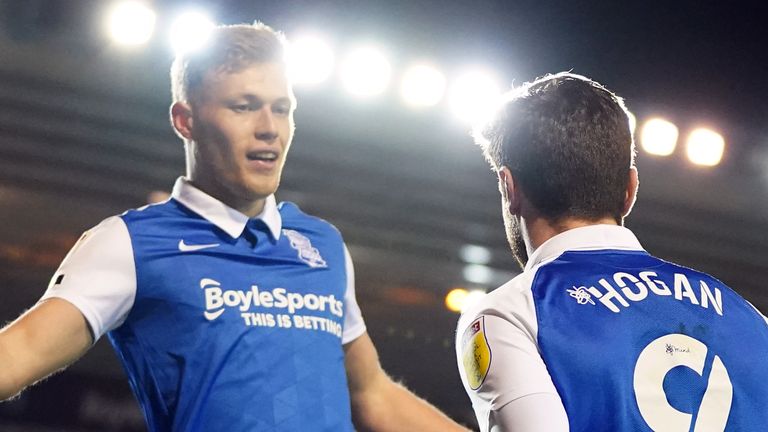 The Swans stay third, nine points off the automatic promotion places and one clear of fourth-placed Brentford – who face Huddersfield on Saturday – while Birmingham move six points clear of Rotherham in the final spot in the relegation zone, albeit having played four games more.

How Swansea lost further ground in the automatic promotion race

Both sides were facing battles at opposite ends of the table ahead of kick-off, though you’d have been hard-pressed to distinguish between the two, with Birmingham looking reinvigorated after a welcome fortnight of training under new boss Lee Bowyer.

Other than an acrobatic save from Neil Etheridge to deny Jamal Lowe, it was a quiet first half-hour, though long throws delivered by Marc Roberts troubled Swansea throughout the half and almost led to the opener when Connor Roberts fouled Leko and conceded a cheap penalty.

Jutkiewicz stepped up and hit his spot-kick straight down the middle, with Woodman staying rooted to the spot to divert the shot away from danger with his knee.

The hosts’ intensity waned after the break and though Swansea struggled to create anything of note in the final third, they tested Etheridge’s reflexes again when he was forced to push away a thunderous free-kick from Yan Dhanda with 15 minutes to play.

Just as the game looked to be petering out to a draw, the hosts were awarded a second penalty of the evening when Dhanda caught Ivan Sunjic inside the area, allowing Hogan to put right Jutkiewicz’s wrongs and smash in the winner from 12 yards.

Man of the match – Harlee Dean

Birmingham’s Lee Bowyer: “It looks better but there’s still seven games to go, so there’s a long, long way to go and a lot of points to play for. The most pleasing thing for me is that we’re here again at home and got another, fully deserved, win against another good side.

“We had to dig deep and the work rate from the lads was outstanding from start to finish. Our press was very good and we forced them to just go long most of the time and when they did try and play, we pressed and won the ball high. That was the plan and, thankfully, it worked, but it doesn’t work unless all of the players are prepared to put a shift in and work hard as a group and we did that today.”

Swansea’s Steve Cooper: “That wasn’t a good version of us tonight; we’re a much better team than that. The result is the most disappointing thing but the performance is right up there with that disappointment as well because we didn’t play anywhere near the level that we can play in so many way. You’ve got to earn the right, you’ve got to make your own luck, you’ve got to make things happen and we didn’t do that tonight.

“I thought Freddie had got us out of trouble in the first half but then, right at the end, it was too much. I’m not saying we got what we deserved, but we’ve certainly got to play better going forward, that’s for sure.”

Swansea are back in action at 3pm on Easter Monday, when they welcome Preston to the Liberty Stadium. Birmingham, meanwhile, travel to the Brentford Community Stadium to face Brentford at 7pm the following day.