Report as Bukayo Saka equalises with a tap in; Pizzi gave Benfica the lead after Emile Smith Rowe was penalised for handball; the return leg will be played at the Karaiskakis Stadium in Greece – home of Olympiakos, who knocked Arsenal out of the Europa League last season – next Thursday 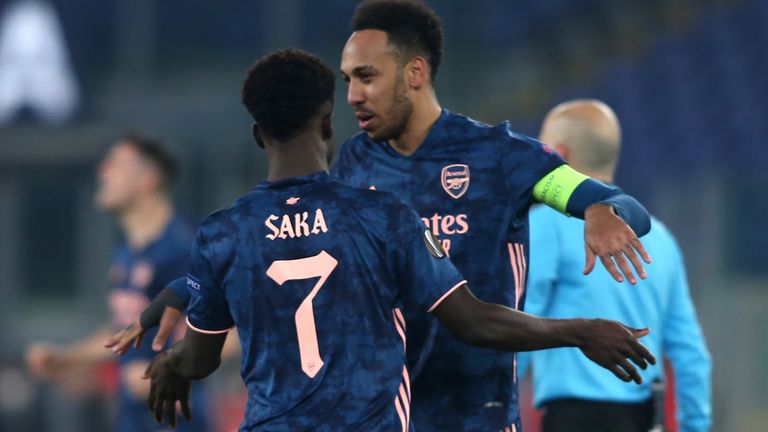 Bukayo Saka’s quick equaliser saw Arsenal grab an important away goal in a 1-1 draw against Benfica in their Europa League last-32 tie in Rome.

It has been a cagey first half at the Stadio Olimpico and Arsenal should have gone into the break in front, but Pierre-Emerick Aubameyang fired just wide with only goalkeeper Helton Aleixo Leite to beat.

But the game livened up after the break and Benfica were awarded an early penalty when Emile Smith Rowe was penalised for handball. Europa League top scorer and captain Pizzi (55) dispatched from the spot.

However, their lead only lasted a few minutes as Arsenal hit back almost instantly. Cedric Soares, who started his career at Benfica’s fierce rivals Sporting Lisbon, fired in a cross that was turned home by Saka. VAR checked the goal for offside – Arsenal were flagged 10 times during the game – but it stood.

The last-32 tie is finely poised for the second leg next Thursday in Athens with Arsenal holding a slender advantage with the away goal.

Arsenal are back on Sky Sports on Sunday as they host Premier League leaders Manchester City; kick-off 4.30pm. Benfica face Farense in the Primeira Liga, also on Sunday.

The pair will then travel to the Karaiskakis Stadium in Greece – home of Olympiakos, who knocked Arsenal out of the Europa League last season – for the return leg next Thursday.