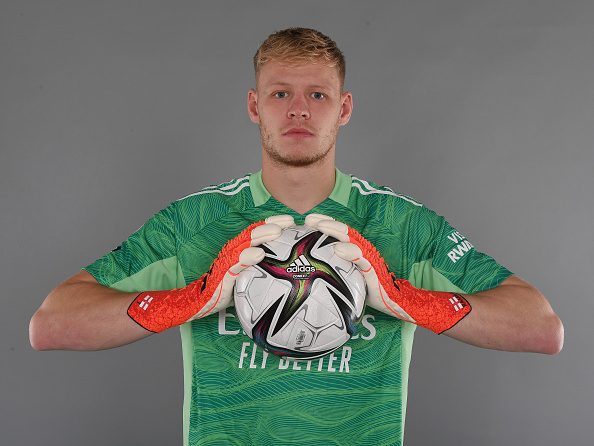 Ben Foster has been ‘seriously impressed’ by goalkeeper Aaron Ramsdale and says the Arsenal summer signing will be a ‘monster’ in the coming seasons.

The Gunners spent an initial £24m to sign former England U21 star Ramsdale from Sheffield United over the summer.

Ramsdale now plans to rival current Arsenal No. 1 Bernd Leno for a place in Mikel Arteta’s side and prove his ability after suffering relegations at Sheffield United and Bournemouth.

It was those two relegations that made Arsenal’s move for Ramsdale somewhat surprising, but Watford goalkeeper Foster is a big fan of the 23-year-old and says he can be a ‘monster’ for the Gunners.

Asked to named a star goalkeeper for the future, Foster told the Premier League: ‘I’ve played against this guy, Aaron Ramsdale, a good few times.

‘The guy seriously impresses me every time he plays. He’s got a little bit of that mentality where he doesn’t care.

‘Nothing fazes him and nothing bothers him, and he’s going to go on to be a serious monster in goal.’

Ramsdale has made no secret of his desire to replace Leno as Arsenal’s first-choice goalkeeper since arriving at the Emirates.

‘Competition is key and it’s also a great place to be,’ he said. ‘Bernd’s done a fantastic job over recent seasons and I’m here to push him all the way and take his shirt.

‘That’s for me to achieve and for him to keep in front of me. Healthy competition is always going to be good for the group and hopefully I can just bring something different to the goalkeeping department but also to the team as well

‘We all have different qualities and hopefully we can all merge together and form a great team.’