Barcelona CAN land both Lautaro Martinez and Neymar this summer, but know they must offload to capture the pair… so could Philippe Coutinho and Antoine Griezmann be making their way to the Premier League?

The headline: ‘Lautaro Martinez, Neymar – Barca will go for both’ appeared in El Mundo Deportivo on Thursday alongside another headline on the same page: ‘Leicester will push hard for Coutinho’.

The two things go together. They have to otherwise there is no way Barcelona can make such bold signings this summer.

There is maybe some wishful thinking going on at the moment in the pages of the papers closest to Barcelona president Josep Bartomeu. 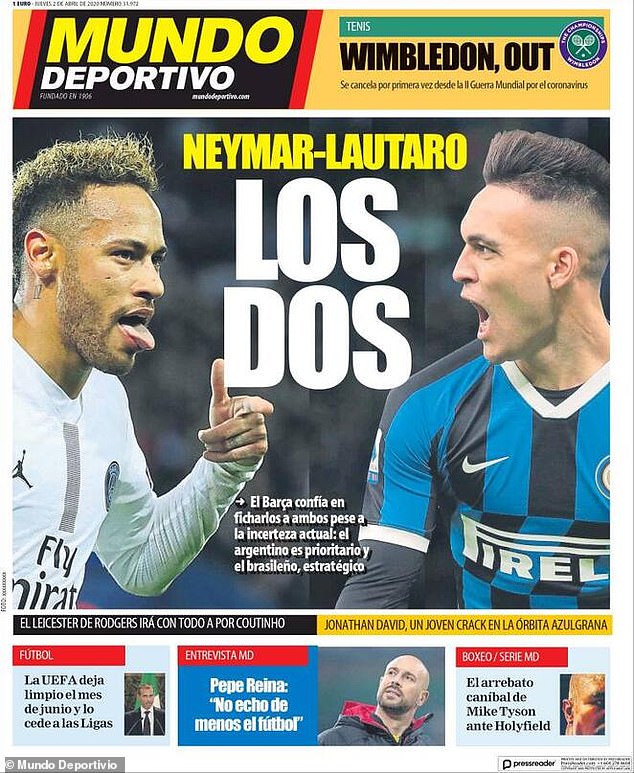 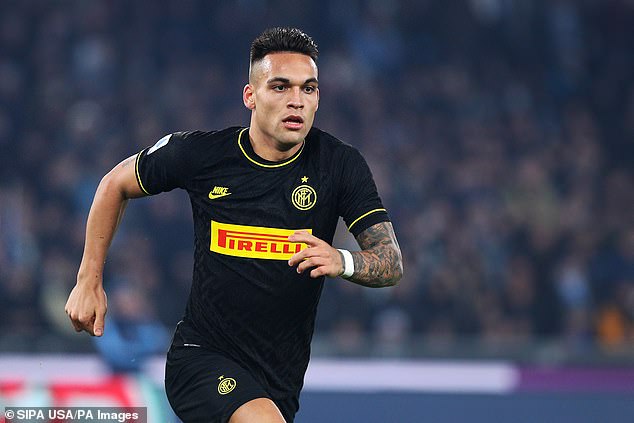 It seems on the one hand the club doesn’t have the cash-flow to cope with a month without matches but apparently it can afford two players rated at around €300m (£263m) for the pair, and it’s all going to be possible because other clubs are just queuing up to take the aforementioned Coutinho, plus Ousmane Dembele and Antoine Griezmann off their hands for big money.

Barcelona have applied for the government’s temporary pay-cut package ‘ERTE’ which gives them state help to pay their staff while the crisis lasts.

They are by no means the only club that has applied, although they were one of the first. The scheme involves the government paying up to 70 per cent of temporarily laid-off employees’ wages although there is a monthly limit of around €1,500 so it’s not true that tax-payers will be forking out for 70 per cent of Messi’s salary. 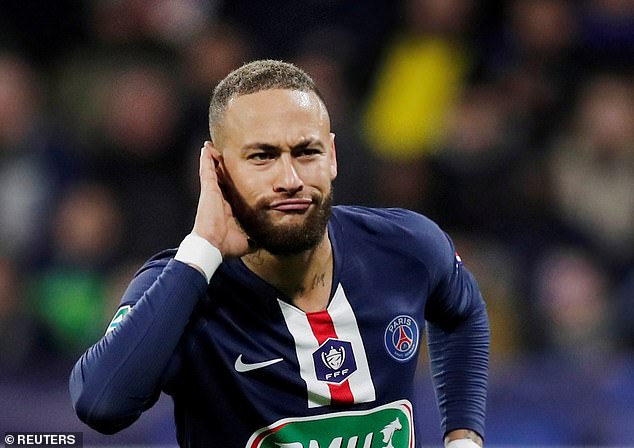 Even so, it still means the state wading in to help wealthy clubs. Barcelona claim pre-crisis they were on course to go past their pre-season target of €1 billion in income. Despite that they need state help to pay staff, and despite that they are planning to buy two of the most expensive forwards in football.

Barcelona cannot afford both Lautaro and Neymar, and the €700m (£613m) makeover of the Nou Camp, and Messi’s new contract. Not without a massive recouping of money spent on their big recent signings. And that looks unlikely.

Dembele has only played around a third of possible minutes since signing for Dortmund and even when fit has failed to become a fixture. 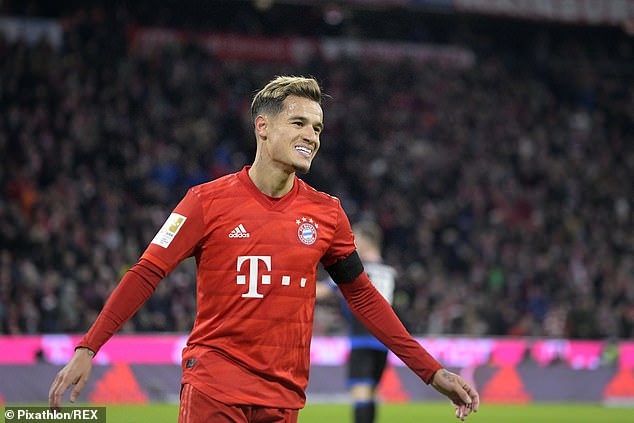 Before this season was interrupted by the coronavirus he had played just two full matches in LaLiga. Last season he also played just two full games. If he is sold the club will have to take a huge hit on the player they signed for €105m (£92m) plus €40m (£35m) in add-ons three years ago.

Griezmann has fared far better than the other two and yet still somehow has not fitted in. There would be a market for him and there is an apparent willingness to make him part of any deal that brings Neymar from Paris Saint-Germain.

The French club would certainly be open to it. It might be more difficult to persuade the player.

With some justification he would argue he has had an OK first campaign. Eight of the 12 goals he has scored have served to open Barcelona’s account in games.

He has made a difference but he is another forward who prefers to play centrally and come back to get the ball in a team – that as Xavi pointed out recently – needs players who want to play wide, and run towards goal stretching defences. 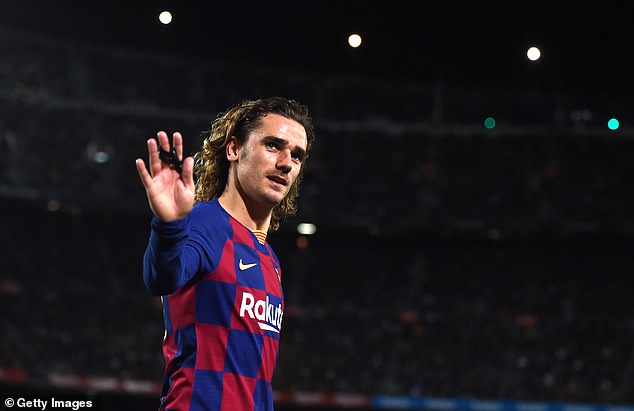 Sources close to the player say he is not interested in giving up on Barcelona quite so soon, and not to go and play in Ligue 1.

If Manchester United – the club his brother Theo is so fond of – were the side trying to sign him then perhaps he could be persuaded. Again though, it’s hard to see United matching the €120m (£108m) paid for Griezmann last summer.

Coutinho, Dembele and Griezmann could all leave but they would all leave at a loss and Barcelona would have to cash-in on other assets to raise the money to sign both Neymar and Lautaro. 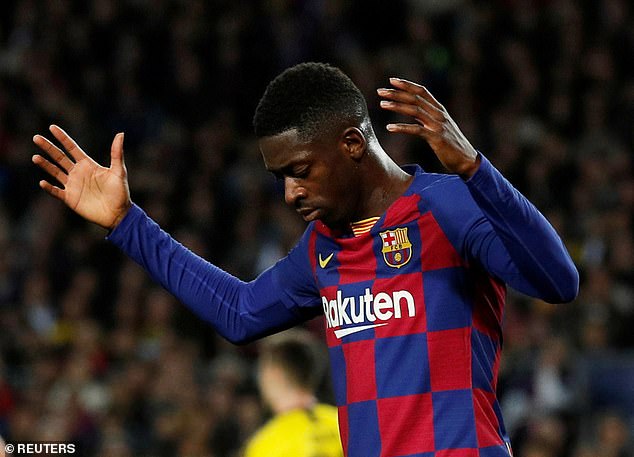 At least they have their targets well-defined. There is no doubt 22-year-old Lautaro Martinez is the player best suited to eventually replace Luis Suarez. And Neymar’s arrival would cheer up Messi, and may even possibly be enough to persuade him to sign an extension to his current 2021 contract.

The Brazilian would also give the club a massive and very timely boost in terms of commercial power. The three of them together would perhaps even work as a trio.

But making the signing of both of them a financial reality is surely out of the question.

That would be true in normal circumstances, much less in the era about to begin when clubs panic over when and if television revenue will arrive, cling to all the players they have on long contracts, and struggle to justify overpaying for anyone. 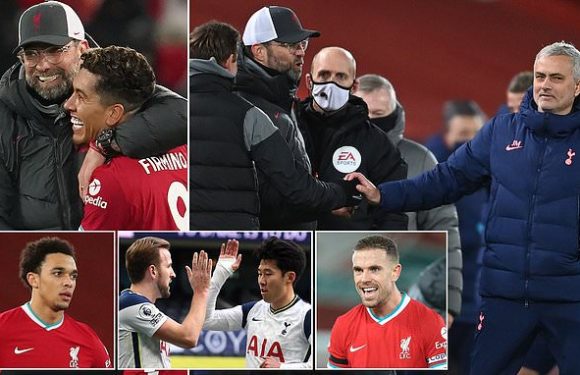 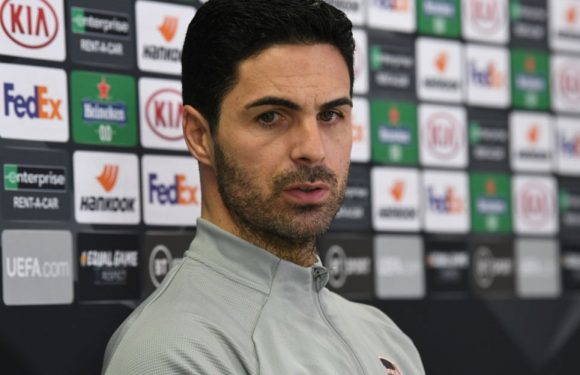 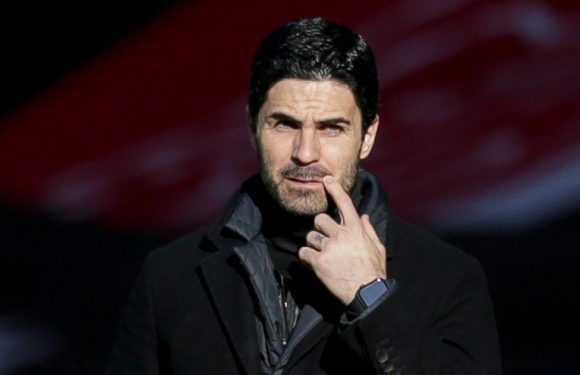