Experienced Matildas defender Alanna Kennedy has dismissed suggestions Australia are up against it in qualifying for the knockout phase of the World Cup, saying the team remains confident that it can get a result against Brazil to keep its title dreams alive.

The Matildas were undone by a skill error and then a lack of concentration from a set piece in the final moments of the game, but Kennedy said the team had learnt enough to rectify its mistakes. 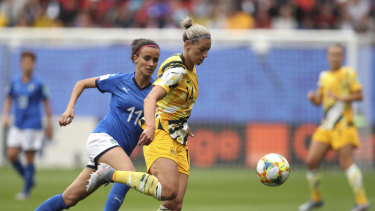 Alanna Kennedy in action against Italy. The Australian defender says the Matildas have put the loss to the Azzure behind them.Credit:AP

''That was probably something that we will look into at training. But I think we’re not overly concerned about the loss, it doesn’t change things going forward – we want to win our next two games of course, to still get ourselves in a good position outside the group stages.

Australia have played Brazil regularly in major competitions and have won three of the last four meetings, so familiarity should breed not contempt, but confidence.

However, Kennedy is expecting a rough and tumble encounter. While the Brazilians are traditionally loaded with skilful players, they can also make matches physical when they need to.

''Brazil in a tournament is a very strong team – so we expect a physical game, they’ve got a lot of experience in their team and a lot of skilful players.''

This Matildas squad has come to the World Cup under far more pressure than any other. They are ranked No.6 in the world, and the media focus and hype around them has been considerable, with expectations high that they might go on and win the tournament.

But Kennedy scoffed at any suggestion that is affecting the players.

''No, I don’t think so. I think we appreciate all the support and it’s nice to have people believing in us and we’ll take in all the positive messages.

''But we don’t put pressure on ourselves – I think the group of players that we have is still reasonably young as well and sort of thrive off of that expectation rather than pressure. Our aim is to do them proud and win games.''

Australia famously defeated Brazil in the round of 16 in the 2015 World Cup and Kennedy was part of that side.

''It's a great memory for us, we created history as a team, but I think those sort of tournaments are behind us and we are a very different team, as are Brazil.

''We have to focus on what's ahead of us in the game that's going to be played on Thursday [Friday morning AEST].''

Australia have historically gone into games as the underdogs; this time they came into the World Cup as one of the favourites, something that Kennedy admitted was not a familiar position for them.

''I think we do carry the underdog tag just as Aussies, it's a mentality that we have. I think it's exciting to know that we have people believe in our abilities and we have got people onside from Australia and around the world.

''It's good to know that we have worked so hard to get into a position where we are the favourite in our group, but we still love that underdog mentality regardless of whether that's what we are or not, that's how we will play.''

Kennedy might find herself marking the best known player in the women's game, Marta, but the Australian centre-back in unconcerned with the prospect for facing the Brazilian star. Marta didn't play in the Brazilians' 3-0 win over Jamaica, so she should be fresh for the Australian test.

''I couldn't care less whether she plays or not,'' said Kennedy.

''It was good for them against a pretty inexperienced team, but an athletic team and a good side, so I am sure it was good for them. They have got some confidence coming into this game so we have to be aware of that.''