Reaction to the boycott has continued to pour in. Kick It Out chief executive Tony Burnett outlined four key steps he hopes social media companies will take to prevent more abuse, while former Premier League footballer Anton Ferdinand revealed he is set for an upcoming meeting with the technology giants.

Facebook, which owns Instagram, and Twitter have consistently said there is no room for discrimination on their services and have vowed to continue working with the relevant authorities to tackle online hate.

“I’m hoping and I think a lot of people are hoping we’ll be able to eradicate the trolls,” the former England international said. “The racist abuse on social media is disgusting. No one wants it. No one wants to see it.

“I’m hoping the boycott will make the social media companies wake up and do something about it, because it’s gone on far too long.

“Players are still being racially abused and nothing’s really happening, whether that’s the FA speaking to the social media companies, UEFA, FIFA – the big footballing associations. I think they need to take more control of the situation and do something about it.

“I’m hoping the boycott will help and make the social media companies stand up and start making these trolls go away and stop for good.”

The FA, Premier League, EFL, FA Women’s Super League, FA Women’s Championship, PFA, LMA, PGMOL, Kick It Out and the FSA united for the boycott from Friday through to Monday.

UEFA gave its backing on Thursday and FIFA said it supported “the initiative of English football to call out discriminatory and other offensive abuse on social media”.

“On social media people bad-mouth me all the time. Like I said I think the social media companies need to start eradicating it, doing something about it, waking up and seeing that it’s not right, that it shouldn’t be happening and it needs to be addressed.

‘Moving to Serie A the right decision’

On the pitch, Young reflected on being crowned Serie A champions with Inter Milan, after Antonio Conte’s side recently ended Juventus’ nine-year dominance and clinched their first top-flight title in 11 years.

The 35-year-old moved to Inter from Manchester United in January 2020 and is the first Englishman to win both the Premier League and Serie A. 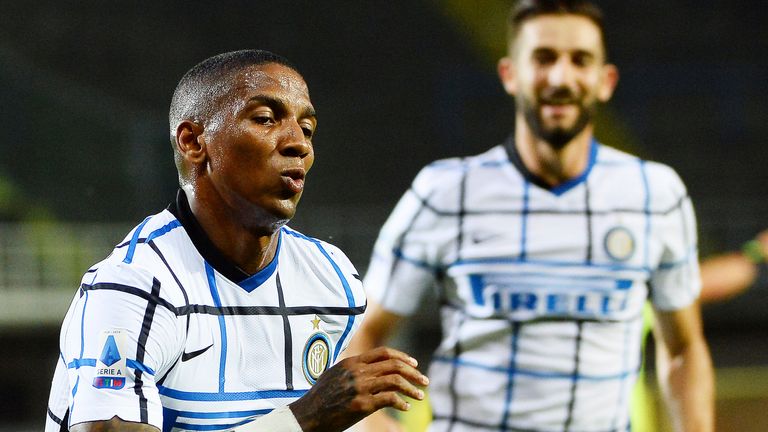 “That sounds unbelievable to be honest,” Young said when hearing that fact for the first time. “It’s obviously nice to win the Premier League and then to go to a new league and win that as well is just incredible, an unbelievable feeling.

“It’s never easy to leave a club in January, but I’m looking back now and I think I made the right decision. I always wanted to go out and win. I’ve got that ambition, drive and desire to win.

“Obviously the first season we got to the Europa League final which unfortunately we lost. We also lost the league by one point and I think that might have spurred us on for this season to go out and get ourselves a trophy and win Serie A.

“Going out there and making that decision, I think it was the best one I made.”

The past weekend was a significant one for Young’s former side Manchester United as fans protested against the club’s owners, the Glazer family.

A number of supporters forced their way into Old Trafford prior to Sunday’s scheduled 4.30pm kick-off against Liverpool while others gathered outside United’s hotel, eventually causing the fixture to be postponed.

The protests, which escalated into incidents of damage and violence, were a demonstration from United fans unhappy with the Glazers’ 16-year ownership and came two weeks after the club were announced as a founding member of the now-collapsed European Super League.

“A lot was said about it happening because of the Super League, but I know United fans and that’s not just what it was,” Young, who made 261 appearances for the club from 2011-2020, said.

“It’s not right to see the violence in it, but the protesting is something the fans wanted to do and they wanted to have their voices heard.

“I don’t think I’ll comment too much about it, but maybe for the owners they’ll see what the fans are saying, they’ll see that anger and they’ll see how upset they are.

“United fans have been asking for change for a long while, so maybe we’ll see changes, maybe we won’t. I think there’s a lot of things in football that need to be addressed and that is one of them.”

United and Young’s current club Inter were two of the 12 founding clubs of the proposed Super League when it was announced two weeks ago.

The news provoked a furious reaction and the plans collapsed just 48 hours later when the six English clubs involved – including United – all decided to play no further part in discussions. Inter joined AC Milan and Atletico Madrid in pulling out of the competition the following day.

“We didn’t want it as players and that’s it – plain and simple,” Young said. “For me, it was a non-starter.

“For us as players it was just about concentrating on the games we had coming up. We needed to carry on winning games, we had a league to win.

“Whatever was happening with the owners, whoever it was, we let them deal with it, we just concentrated on what went on on the pitch.”

Watch more of this exclusive interview with Ashley Young on Inside Football, Sky Sports News, from 6.30pm on Thursday.

Kick It Out reporting racism

Online Reporting Form | Kick It Out

Kick It Out is football’s equality and inclusion organisation – working throughout the football, educational and community sectors to challenge discrimination, encourage inclusive practices and campaign for positive change.