Home » Soccer » As One? The tension at the heart of trans-Tasman football relations

Five years ago, Wellington Phoenix were put on very public notice by Football Federation Australia – shape up, or ship out.

"You can't expect to squat on a licence," was the famous phrase used by then-chief executive David Gallop, warning their flagging off-field 'metrics' could cost them their spot in the A-League. 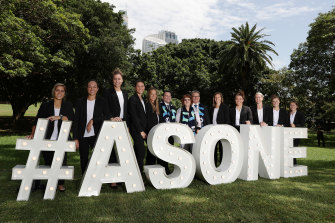 The 2023 Women’s World Cup was a joint venture, but Australia and New Zealand have different – and sometimes competing – football interests.Credit:Getty

Today, the Phoenix's place in the newly-independent A-League is assured. But a new regime at FFA is intent on reframing the terms of their involvement in the Australian game to ensure the benefits are felt on both sides of the Tasman – not just one.

That much was made clear last week when Gallop's successor, James Johnson, effectively shut the door on any chance of Wellington joining the W-League in the foreseeable future.

Johnson rejected what FFA insists was an 11th-hour request from the club for a change to the W-League's player registration rules to mirror the A-League, where New Zealanders are not counted among the Phoenix's five permitted foreign players.

The Phoenix have long been pushing for a W-League team and were ready to go for the start of the new season on December 27. They appear to have assumed – like most observers – that the change would be a fait accompli, simply because that's how it is in the A-League. 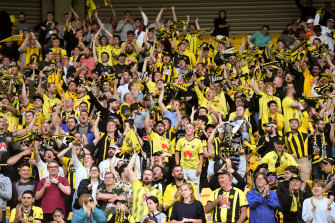 Most Australian fans appreciate what the Wellington Phoenix bring to the table.Credit:Getty

FFA's refusal was met with widespread dismay, particularly in light of Australia and New Zealand's successful bid to host the 2023 Women’s World Cup and the legacy it is supposed to leave both countries. 'As One'? Apparently not.

As FFA insiders are at pains to point out, however, a joint-venture tournament is one thing. But FFA and New Zealand Football remain entirely separate organisations, with separate and sometimes competing interests.

And FFA's primary interest at the moment is fixing the country's broken development pathways – not helping New Zealand build theirs if it comes at Australia's expense. 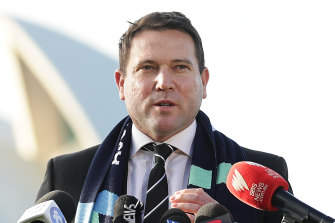 Another report on the women's game has been commissioned by FFA, and in a statement, Johnson said the conclusions were very similar: the W-League, with its short 14-game season, offers just 113,444 match minutes to players compared to an average of 291,660 minutes in the other leagues studied around the world.

"To mirror current eligibility rules for the A-League, which have yielded equally if not more alarming development 'gaps' for male footballers, without having undertaken a proper analysis and consultation would be irresponsible and most certainly perpetuate the ongoing player development issues in Australia," Johnson said.

Picking on the Phoenix, to many fans, is a bit like shooting Bambi. Since Gallop's spray they've become one of the A-League's most compelling teams to watch and as a club, they're hard to dislike. They've given opportunities to players like Olyroos pair Cameron Devlin and Reno Piscopo, the rise of young Kiwi talents like Sarpreet Singh and Liberato Cacace has been captivating, and the sacrifices the team has made post-COVID have been immense.

But behind the scenes, there have been issues between the club and head office. Wellington's owners, led by chairman Rob Morrison, took FFA to court last month over an outstanding $1 million bill for failing to hit the attendance and TV ratings benchmarks prescribed in their Gallop-era licence agreement.

The case was settled out of court, but tension clearly still remains at the heart of the relationship – even though, according to sources, a new five-year A-League licence extension for the Phoenix has been agreed.

During negotiations, sources say Wellington told FFA they were happy to be seen as an Australian club that just happens to be based in the New Zealand capital to make it easier to gain the relevant approvals from FIFA and the two confederations – Asia and Oceania – that they straddle.

With that, FFA believes, comes a responsibility to the Australian game.

There are three other A-League clubs without a W-League presence – Central Coast Mariners, Macarthur FC and Western United. FFA were happy to put the Phoenix at the front of the queue, but on their terms.

Sources also claim that a major part of the Phoenix's motivation to get a W-League team over the line this season is because they would have received a $500,000 high-performance grant from the New Zealand government.

FFA won't budge from their position on the W-League's foreign rules – in fact, sources say that, if anything, it's more likely Wellington's generous A-League registration rules could be wound back to match them.

Gallop viewed the Phoenix primarily through a financial prism. Sources say their continued presence in the A-League comes at a cost to the Australian football economy of roughly $2 million per season – that is, they take out more than they put in, even though neutrals warmly appreciate them.

Johnson is now looking at Wellington through a pure football prism, and what he sees is an inherent opportunity cost that is hobbling Australian football. The A-League and the Phoenix may no longer be under his jurisdiction, but that doesn't mean FFA won't be able to shape them both.