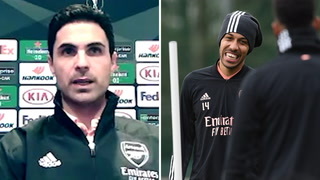 Arsenal boss Mikel Arteta has hinted that he could axe Pierre-Emerick Aubameyang amid the striker’s poor form.

Aubameyang’s agent Kwaku Mensah had posted on social media a screenshot of some dreadful stats.

They showed the Emirates outfit are joint 18th in the Premier League for the number of shots on target this season, and joint last for chances created.

And the agent captioned the image: “If you create chances…” suggesting that Arteta’s tactics are at fault.

The boss has now suggested Aubameyang, who captains Arsenal, could miss out as the Gunners look to string some results together. "No one is undroppable," Arteta said. "At the end of the day, we have to find the right players to win football matches.

"But we cannot forget what Auba has done for this club and what he has done in recent months, not years ago.

"As well, I see how he's training and how he's behaving, how much he wants to turn this situation around.

"When I see that type of hunger, it's about supporting the player as well as the status he has in the team because of the performances he has provided for this football club."

Arsenal take on Dundalk on Thursday night in the Europa League having already progressed to the knockout stages.

Arteta added: "We have a few kids here. We left a few players at home as well.

"There are a lot of games and we need a complete training week as well, which I think is going to benefit us.

"But we're still going to have a very competitive team to play tomorrow."