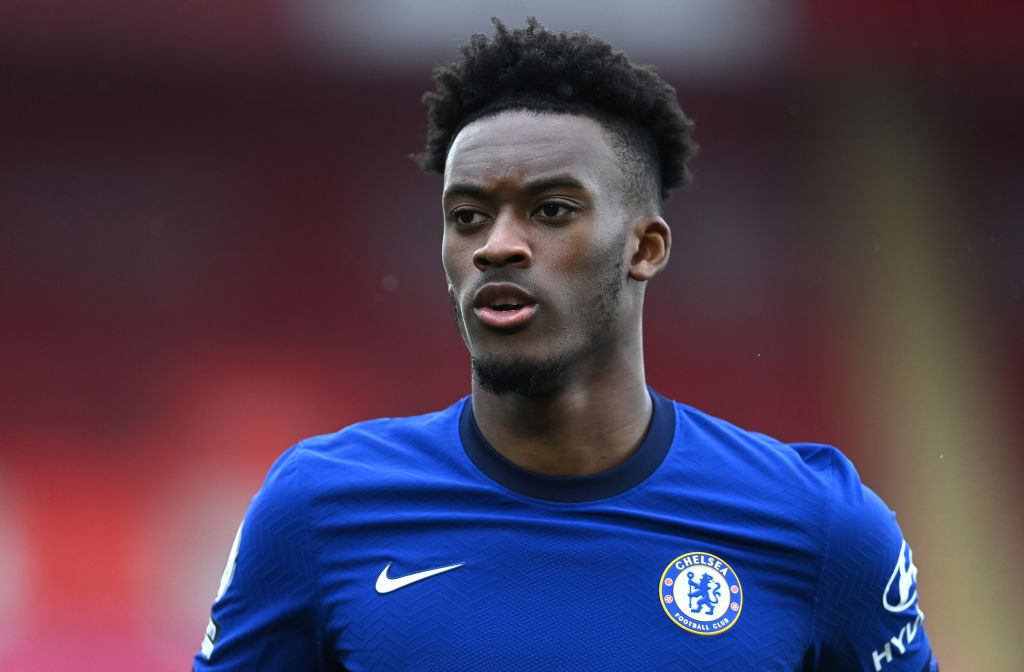 An irate Thomas Tuchel took aim at Tammy Abraham and Callum Hudson-Odoi after hauling both players off in Chelsea’s 1-1 draw with Southampton.

Mason Mount cancelled out Takumi Minamino’s well-taken opener with a penalty in the 54th minute to ensure Tuchel’s unbeaten record remained intact but the German cut a frustrated figure on the touchline throughout much of Saturday’s clash at St Mary’s.

The Blues will have been desperate to apply some pressure on Manchester United and Leicester with all three points and Tuchel was less than impressed with the display and admitted it felt like a ‘missed opportunity’ for his side.

Abraham was taken off at the halfway stage and while he was later seen with an ice pack around his ankle, Tuchel insisted the substitution was linked to his performance rather than being injury-related.

And Hudson-Odoi, who came on for Abraham at the break, lasted just 30 minutes before he too was hauled off and replaced by Hakim Ziyech, with the England youngster showing his frustration as he returned to the bench.

Asked whether he was worried about Abraham’s fitness ahead of Chelsea’s Champions League last-16 tie with Atletico Madrid, Tuchel told BT Sport: ‘I’m not concerned about Tammy, it [the substitution] was not from injury.

‘It was hard for him to show his quality and we were not happy with the last 20 meters.

‘Tammy could not put his stamp on the game so we changed the formation a little bit, we brought in Hudson.’

Tuchel was scathing with his assessment of Hudson-Odoi’s display and criticised the forward’s energy levels and attitude in his brief cameo.

‘With Hudson, I was not happy with the energy and the attitude and the counter-pressing so we decided to take him off again because we demand a lot,’ Tuchel went on.

‘We demand 100 per cent and I had the feeling that he is not right in this shape where he can help us.

‘So the decision for today, it’s a hard decision for the players to come on and off but tomorrow it will be forgotten and he has all possibilities to start the game against Atletico.’

Tuchel continued his attack at his post-match press conference but insisted ‘nothing will stick’ and that Hudson-Odoi would be given the chance to redeem himself ahead of their trip to Bucharest on Tuesday.

The Chelsea head coach added: ‘In a game where it’s hard to create chances, you need to rely on the counter-pressing to force errors and to get the second ball and get a easy chance after the ball win.

‘For that you need to be totally on and totally sharp for counter-pressing.

‘I did not feel this from Callum today. He missed some opportunities for counter-pressing, he lost some easy balls.

‘I had the feeling he was never really into the game. You know that I trust him a lot because he plays every game for us but today I was close to him and I don’t know, maybe it’s unfair, but I did not get the feeling I normally get from him, that he can be decisive.

‘So it’s a hard decision today but nothing that will stick between us or stick for long. Tomorrow it’s forgotten and we prepare for Atletico.’

On whether he was concerned about denting Hudson-Odoi’s confidence by subbing him on only to bring him off again, Tuchel replied: ‘No, absolutely not.

‘Everybody needs to understand that I take decisions to win games.

‘We cannot lack energy 5-10 per cent, it’s not possible. I know what he can give, that’s why I trust him a lot and this will not change but he knows exactly what I demand from him and when he does not reach this level, maybe we have a hard decision.

‘There’s no need to think in old-fashioned terms that this is worst thing that can ever happen. No, it happened today and maybe he starts against Atletico if we need his qualities but then he needs to be trustworthy and reliable and this is the next step for him.

‘Then he needs to hang in in a different way. So now it’s forgotten, he needs to step up, learn from it, accept it, swallow it and there’s no problem.’