Home » Soccer » Andy Walker on Celtic: What will Dermot Desmond do now? 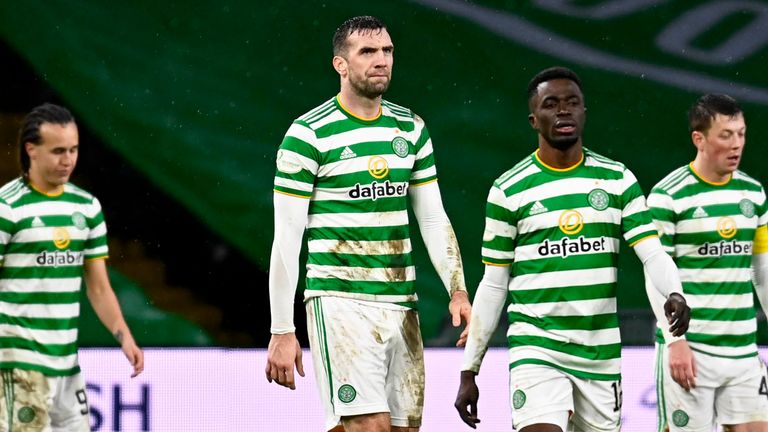 With Celtic so far behind Rangers in the Scottish Premiership and having no realistic chance of retaining the title and securing the much-coveted 10-in-a-row that the fans were desperate to see, the spotlight will now turn to the only man that can give the Celtic supporters a bit of hope.

Just exactly what is going through Dermot Desmond’s mind?

He may well be the billionaire majority shareholder and the only man who has the authority to make serious changes at the club but I imagine he’ll be asking the same questions as every other ordinary Celtic fan – namely, what on earth is happening to my team, on and off the park?

On the park, even when you’re just one point behind Rangers, demanding questions are asked constantly. Being second in Glasgow is useless. Celtic have far greater financial muscle than Rangers and a huge squad so it’s reasonable to ask why they are trailing so far behind.

All the supporters can see is their team not one, but 21 points behind Rangers before the second week of January! That’s as well as getting knocked out of the Champions League, Europa League, and the League Cup. As things stand in the title race, they’re now also-rans.

Chief executive Peter Lawwell tried to address matters on Wednesday night and came out of hiding with an apology, and for around 30 seconds, I thought it was delivered with humility and sincerity.

Sadly, the other four minutes were baloney.

Have Celtic been badly affected more than any other club? Really? Try telling that to Hearts or Partick Thistle or any of the lower league clubs whose season is currently suspended. The trip was performance-based? Celtic fans saw pints at the pool.

When things are going well for Celtic, you see social media posts of board members indulging in a bit of embarrassing karaoke with Rod Stewart and fawning over other celebrities. Out of tune as well as out of touch. What about serious matters?

Times are tough, fans are enduring enormous personal sacrifice and yet still they find money to buy a virtual season ticket. I know of supporters who haven’t seen their grandchildren for 10 months, been unable to squeeze loved ones and all they’re asking is for someone with a bit of backbone to engage with them.

Remember, this is nothing more than fans wanting to know what’s happening at their club. They’re not looking for national secrets.

The consequences of the Dubai trip are that 13 players and three staff members are self-isolating after Christopher Jullien tested positive for Covid-19, meaning an under-strength Celtic dropped more points on Monday night against Hibs and a similar squad will go up against Livingston at the weekend.

It’s as big a failure off the pitch as it is on it.

So, what does Dermot Desmond do now?

I reckon he’ll realise it’s fast becoming an endurance test for the supporters between now and the end of the season. The harsh reality?

It’s a question of when Rangers will secure the title, not if.

That means supporter apathy will kick in and the renewal of season tickets for some is in serious doubt.

When this has happened before, Desmond took matters into his own hands. He spoke directly to both Martin O’Neill and Brendan Rodgers and convinced them that Glasgow, Scottish football and producing an exciting, winning Celtic side can be as attractive as anywhere in Europe. Well, for a short time at least.

Under John Barnes and Kenny Dalglish, Celtic had finished 21 points behind Rangers. Desmond brought O’Neill into town in 2000 and success at home and abroad followed.

Magical times and fabulous memories for the Celtic support.

Under Ronny Deila, parts of the stadium were closed, the football was dull and Celtic lost to Rangers in a Scottish Cup semi-final. Again, Desmond knew what was required.

He took control and lured a former Liverpool manager to Glasgow. Queues formed at the ground with everyone desperate for season tickets.

Brendan Rodgers delivered trebles, an invincible season and sparkling football. He improved players that were already there, he introduced a high level of professionalism and as a result the fans got value for money.

Right now, Celtic fans are being short-changed. Unable to see the best players at the club due to arrogance over an ill-advised trip to Dubai, they need a boost, something to get their juices flowing again for next season.

With the current board letting them down, Desmond has to take control and deliver a set up they can buy into again.

Whoever comes in on and off the park has a huge job in front of them. Clearly, loan players like Diego Laxalt, Mo Elyounoussi and Shane Duffy will go back to their parent clubs.

It’s a huge challenge for the club to get back to winning ways. But if Dermot Desmond can source good, strong leadership in the boardroom to set up a new structure at the club, all is not lost.