The Wallabies are set to play a match at the SCG for the first time in 35 years after Rugby Australia confirmed the three-Test series would be played in the space of 11 days.

As reported last week, Australia will take on the world No.5 French in three matches on July 7, 13 and 17, the first two of which fall on Wednesday and Tuesday evenings. 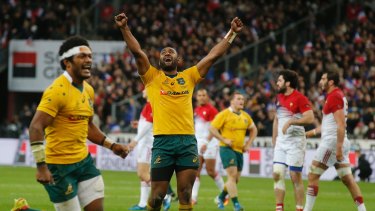 Tevita Kuridrani during the Wallabies’ last Test against France in 2016. Credit:Michel Euler

The opening Test will be held at the SCG, a venue the Wallabies last played at in 1986 against Argentina. Australia, captained by Simon Poidevin, won that match 26-0 in front of a crowd of 18,799.

The second match will take place at AAMI Park in Melbourne, while Suncorp Stadium is locked in for a potential deciding Test.

Three-Test series are normally played over three consecutive Saturdays but RA and French officials have come to an agreement given there is a tighter window because the Top 14 season does not finish until June 26.

It means six- and four-day breaks will split the series. The Rugby Union Players’ Association (RUPA) wanted a minimum of five days between Tests but both parties have agreed on three matches in 11 days.

Larger squads are likely to come into play due to player welfare issues.

Rugby Australia boss Andy Marinos said: “We have enjoyed constructive and engaged discussions with RUPA and the playing group on the international calendar, ensuring that player welfare and high performance outcomes can be optimised.

RUPA boss Justin Harrison added: “Rugby Australia and RUPA will continue to work constructively to maintain player welfare as a priority and we now look forward to what promises to be a thrilling Test series against France.” 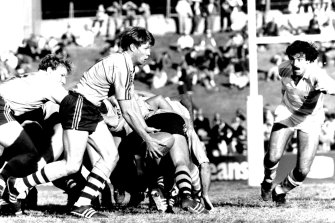 Wallabies halfback Nick Farr-Jones in action during Australia’s last Test at the SCG in 1986. Credit:Fairfax Media

Meanwhile, Wallabies coach Dave Rennie has refused to pick a winner for Saturday’s Super Rugby AU decider but said it was the perfect time for players to show their worth.

Rennie, speaking to reporters on the Gold Coast on Thursday, was happy to sit on the fence when asked what his tip was for the big game between the Queensland Reds and Brumbies.

The Reds have won both outings against the Brumbies this year by two points.

“I’m not going to pick a winner because I’ll get shot by someone,” Rennie said. “The Brumbies have been fast starters in both those games and the Reds have clawed their way back and only really taken the lead in the dying moments. I’d say the Reds will want to start fast and the Brumbies will want a strong finish.

“We invited 40 guys into [Wallabies] camp and there is about 26 from those two sides. They’ve been dominant. It should be a doozy.

“There are a lot of spots that are really competitive. No better time to make a statement than in a final I reckon.”

The match will be the first of the Super Rugby AU season shown on Nine’s main channel. A crowd of 40,000 is expected at Suncorp Stadium.

Super Rugby officials will be keeping a close eye on New Zealand border restrictions after news on Thursday that flights from NSW would be suspended for two days.

With Super Rugby Trans-Tasman set to kick off next Friday, there could be major ramifications for the competition if quarantine-free travel is not allowed.

Flights from NSW have been suspended for 48 hours until 11.59pm on Saturday.

The New Zealand government will make a call in coming days whether that ban is extended.

The Waratahs have their first match against the Hurricanes at the SCG next Friday and Rennie is intrigued to see how Australian teams fare.

“That’ll give us a good indication of where we’re at and the shifts we need to make prior to Bledisloe Cup games,” Rennie said. “It’s going to be tough. The Kiwi sides have got five good teams. That gives you an idea of the sort of intensity that is going to be required when we start playing Test footy.”

Wright has been injured for most of the year and led the Reds in their loss to the Force but has been relieved of duties for the biggest game of the season.

“He’d like to have the starting jersey on his back but he’s a great team man,” Thorn said.

“He was late to come in and the back row have been doing it all season. James had been doing a good job leading the side, so it just made sense.

The Melbourne Rebels also announced on Thursday the re-signing of promising second-rower Trevor Hosea on a two-year deal that runs until the 2023 World Cup.