Less dazzle more fizzle for Wales this time against Scotland in Cardiff – George North and Jonathan Davies sparkling into life, but the match itself short of fireworks.

This might have been the first time Wales had won their opening Under Armour Test since 2002 – so a good stepping stone – but this was hardly the all-court blitz of February.

They have only ever lost once to Scotland here, so the result was far from a surprise, but it will hearten Warren Gatland to be start November well at last. 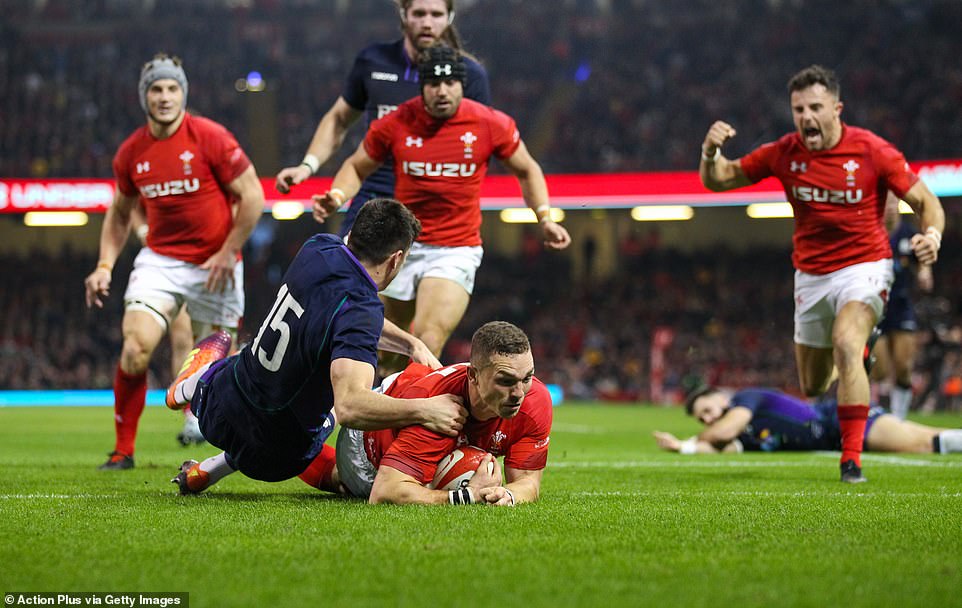 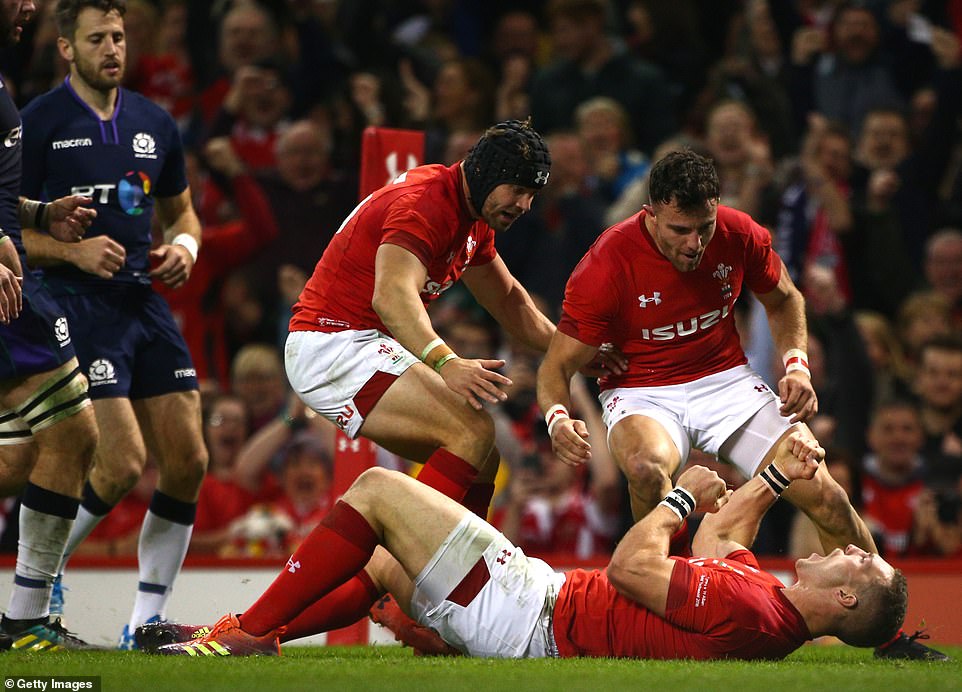 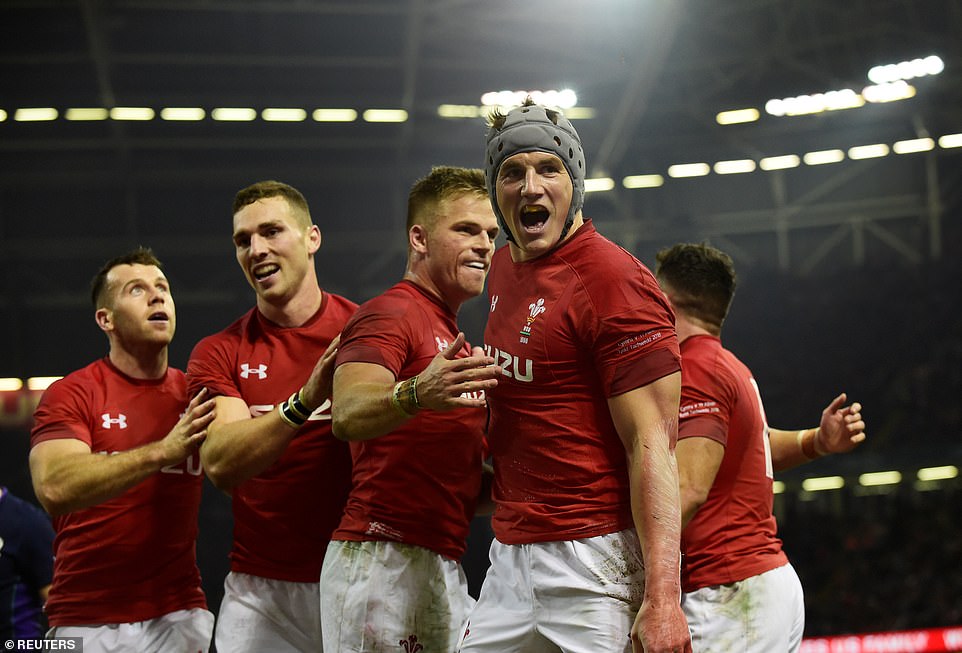 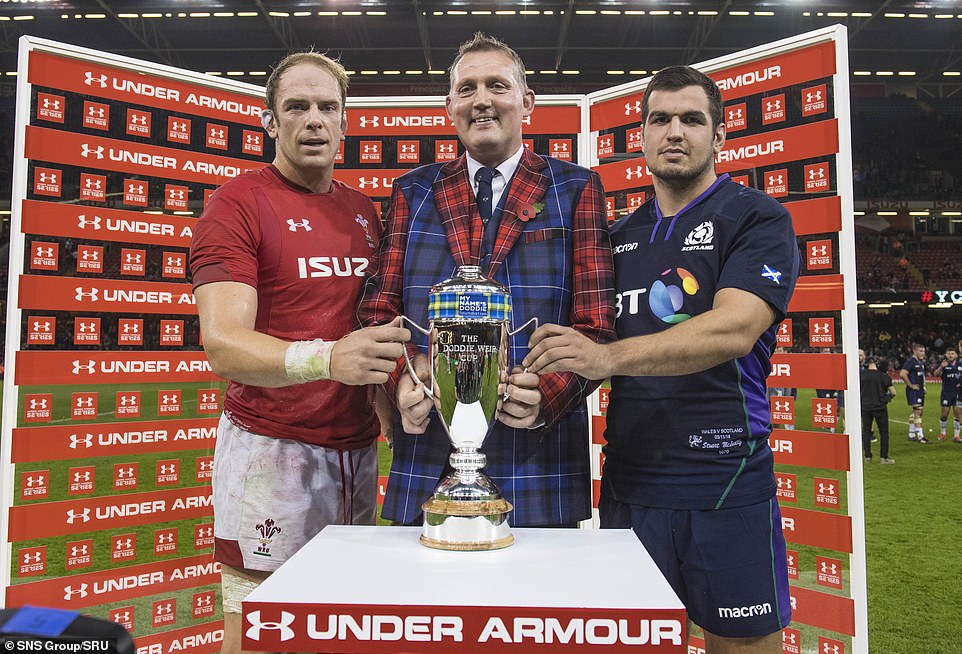 North scored his 34th Welsh try to take him third on the all-time list, and Davies palmed off Huw Jones to take his try – Leigh Halfpenny kicking the rest.

There was a moment of concern though as Ken Owens looked to have taken a sickening blow just before half-time only to return in the second half.

Scotland were seriously subdued and only managed a try from Stuart McInally and one penalty from Adam Hastings.

It was expected that the match would follow in the theme of an emotional day in Cardiff, but really the first-half fare was rather subdued and ho-hum.

There was plenty to get the beans going here, with the match being played – eventually – in aid of the great Doddie Weir.

The legendary former Scotland and Lions lock had all inside the Principality Stadium on their feet when he walked slowly from the tunnel flanked by his wife Cathy and three sons, Hamish, Angus and Ben before 10 minutes kick-off.

He was superbly decked out – as he always is – in a trademark tartan suit, this one a new design with Scottish and Welsh colours combining.

Having placed the trophy with his name on on a pedestal at pitch-side, making a joke about it having ‘big lug’ ears like his and taking a superb ovation it re-enforced the feeling that it would have been a downright disgrace if the Welsh and Scottish Unions had not changed their minds earlier in the week to syphon off some of the money from the £3million made by the match to the ‘My Name’5 Doddie Foundation’ which is desperately trying to find a cure for motor neurone disease. 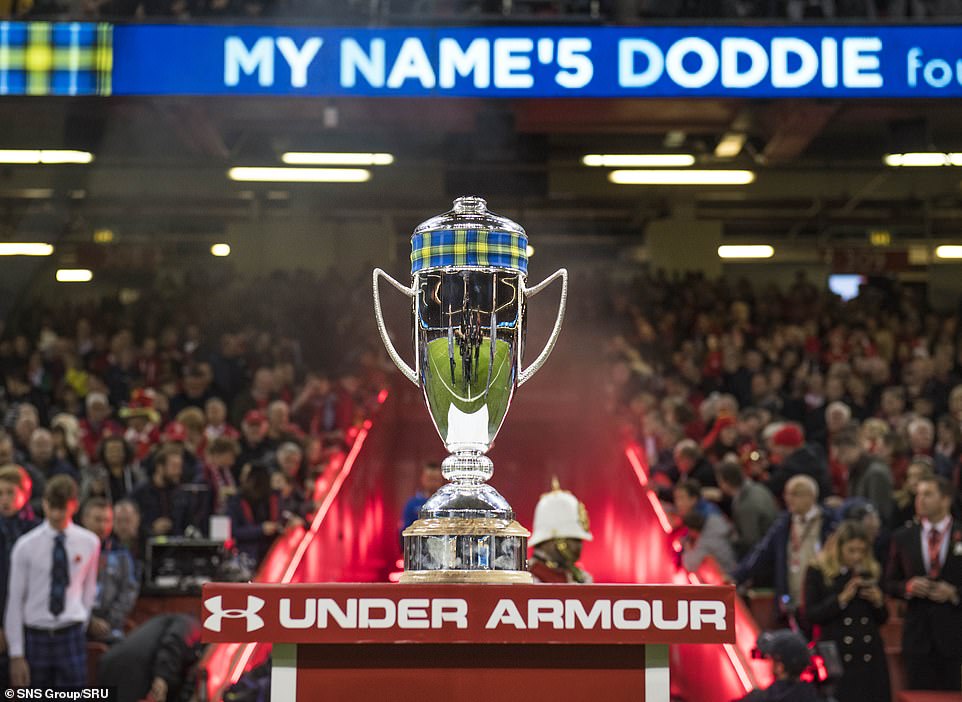 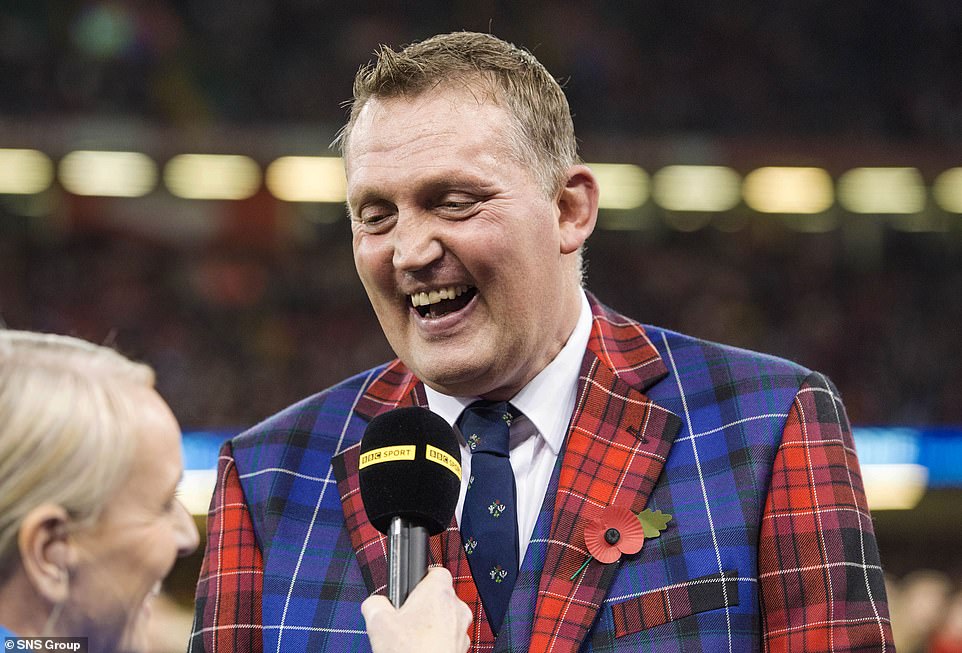 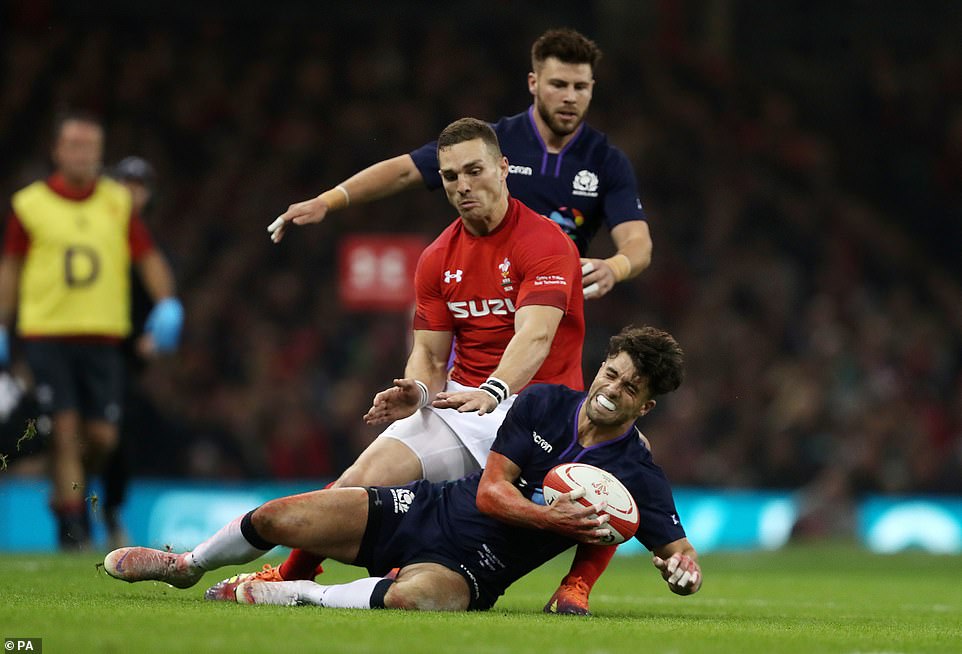 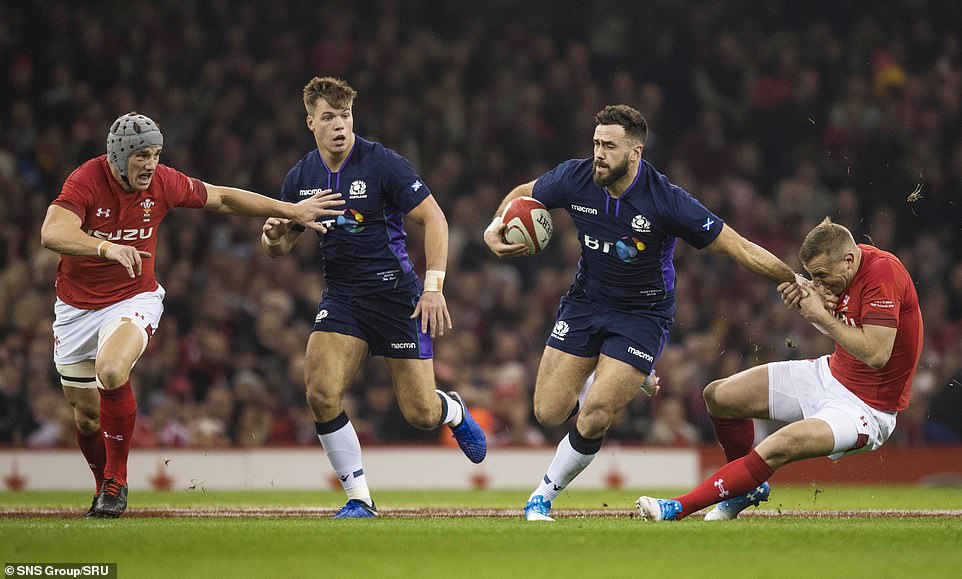 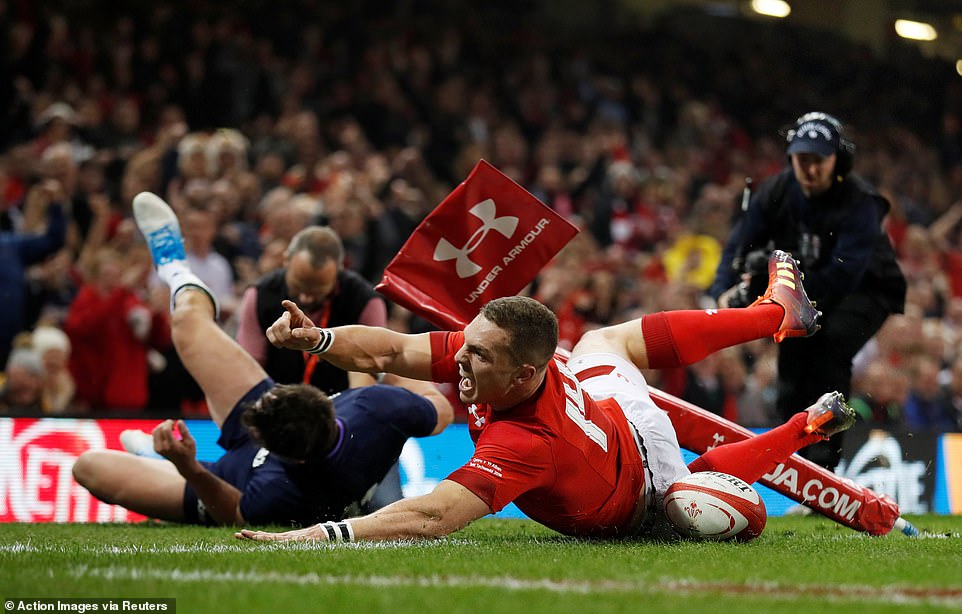 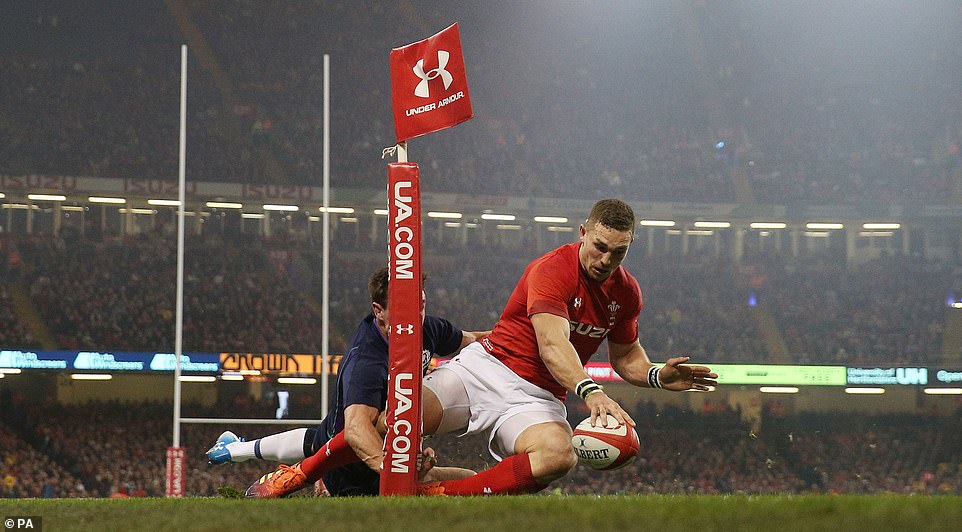 They belated decided on Monday to send the charity a six-figure sum, when previously no money at all was being pledged, and as so much of this match was scripted around Weir it was only right that money, not just awareness was raised for him.

However, the atmosphere after Doddie had taken his seat was as flat as a pancake – the match equally so.

Wales quietly built a nine-point lead via three typically well-hit penalties from Leigh Halfpenny, the third coming after North thought he had scored.

The winger gathered a chip from fly-half Gareth Anscombe on the right and touched down, but had a right foot in touch.

Adam Hastings, a subject of much discussion in the week ahead of his first start against a major Test nation, made an anxious start. 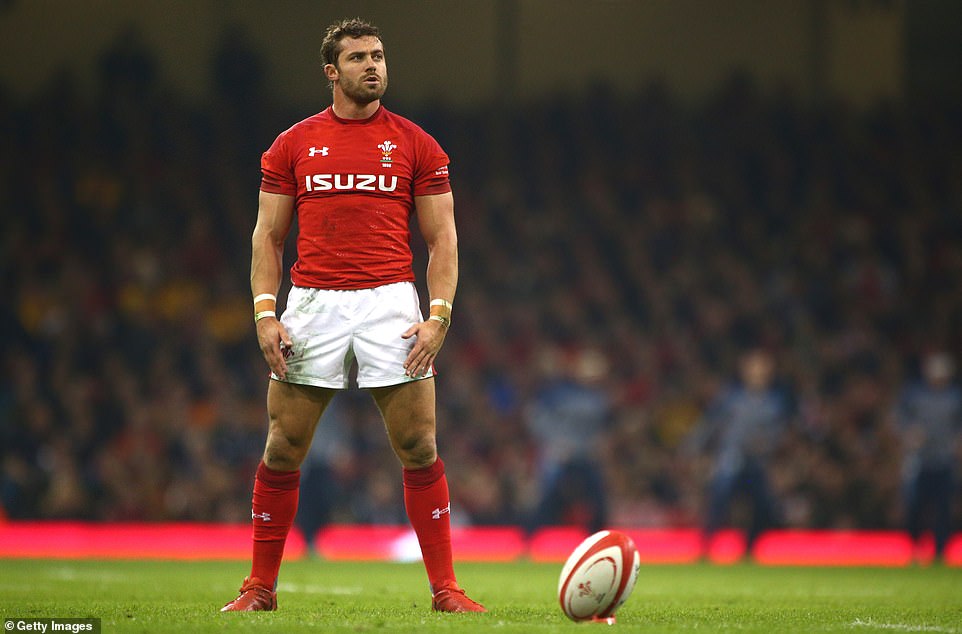 Leigh Halfpenny got the hosts on the board early on, kicking three penalties comfortably to keep Scotland at arm’s length 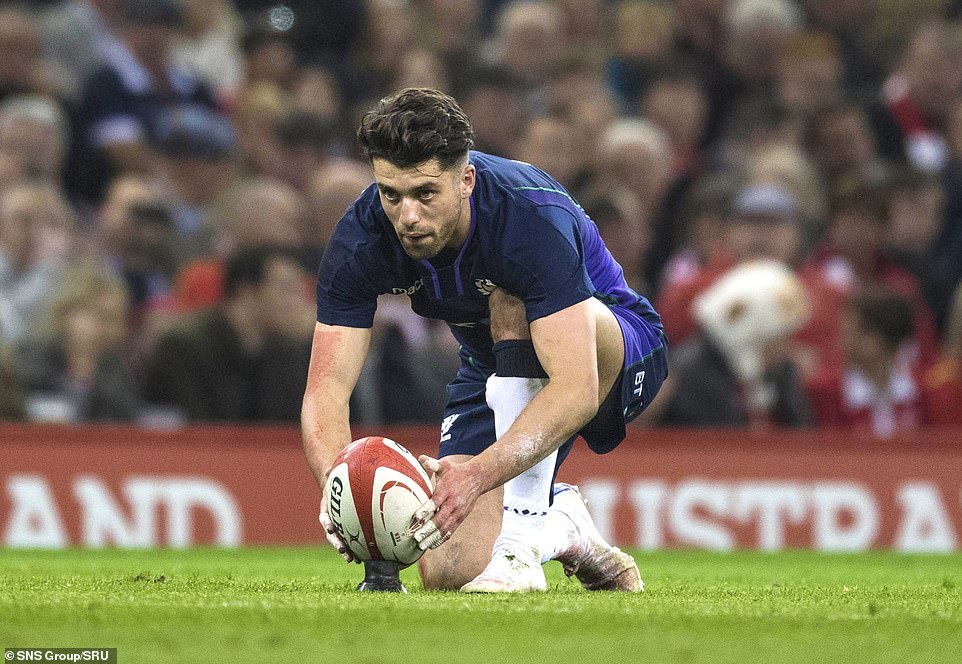 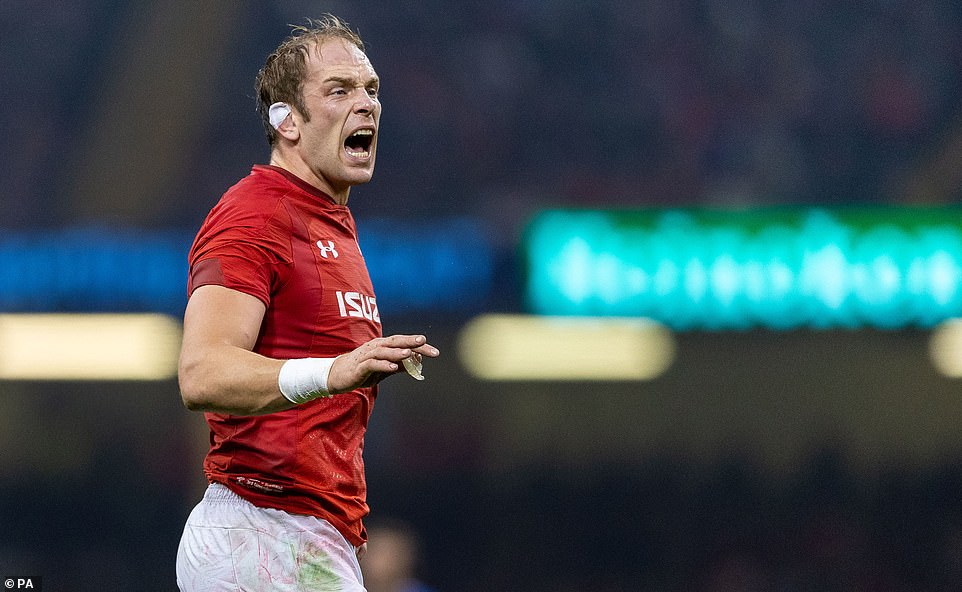 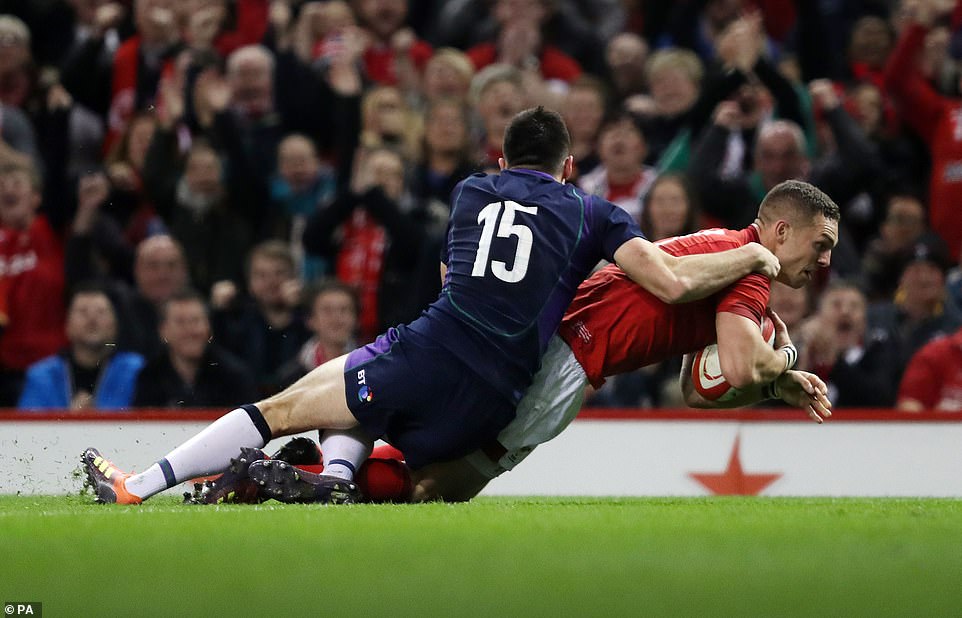 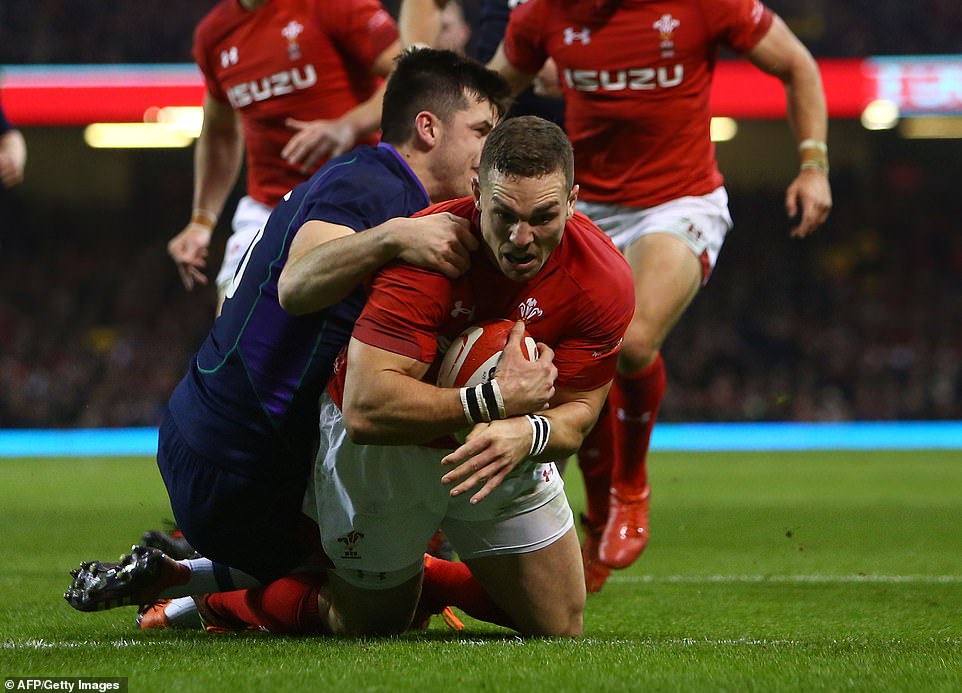 Blair Kinghorn (left) tries to stop the inevitable, but the Ospreys wing was too powerful to stop and Wales extend their lead 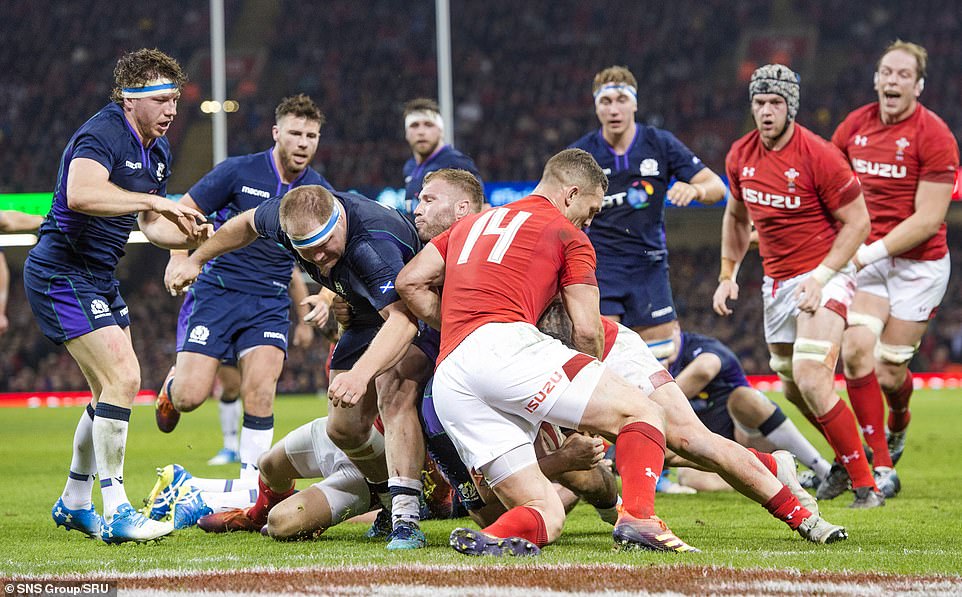 But Scotland hit back almost immediately through captain Stuart McInally, who finished off a driving maul from the lineout 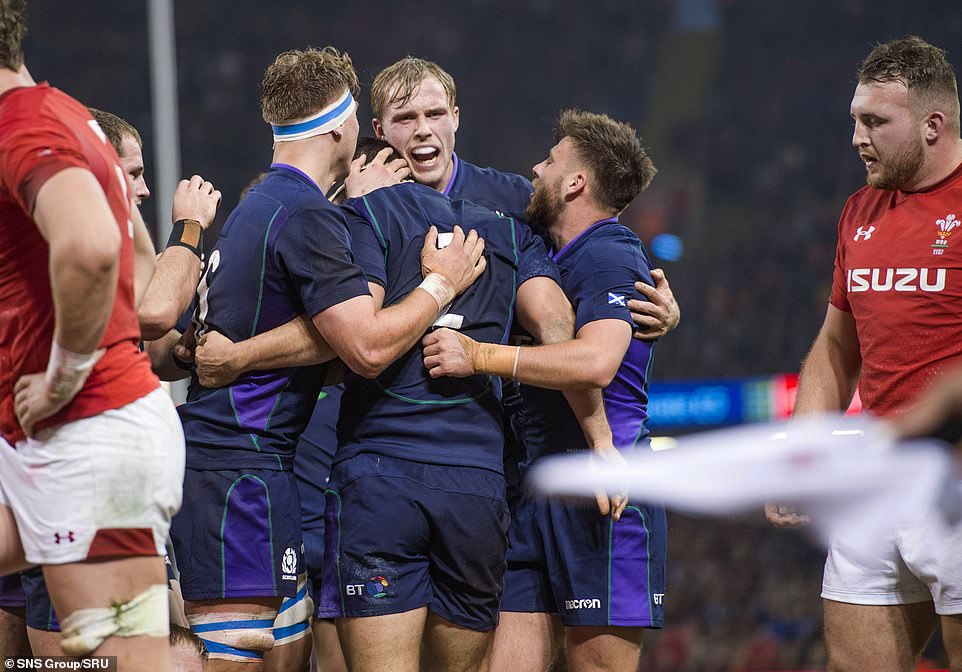 Within a couple of minutes he had missed touch with his first penalty and had a large red streak down his right side, having been piled to the floor and dragged through the sponsors branding on half-way.

But he hit a penalty to calm those nerves and grew into the game.

North gave the game some much-needed spark. Taking a disguised ball down the left he whacked through three defenders in a brilliant surge to the line, all pumping legs, leaving Huw Jones, Alex Dunbar and Blair Kinghorn quaking in his wake.

That try was his 34th for Wales, taking him past Ieuan Evans and means he now sits third alone in the Welsh all-time try-scoring list with only Gareth Thomas (40) and Shane Williams (58) to beat.

Halfpenny missed the conversion, and then at long last Scotland managed a response.

Hastings banged a penalty to touch, the maul was set and McInally crashed over – the 22-year-old fly-half adding the kick. So for the ease in which they built a lead Wales were only up by four at the break.

Right on half-time Ken Owens took a sickening blow. He missed a flat pass, crashed into the Scotland line and struggled to regain his feet after crawling away. 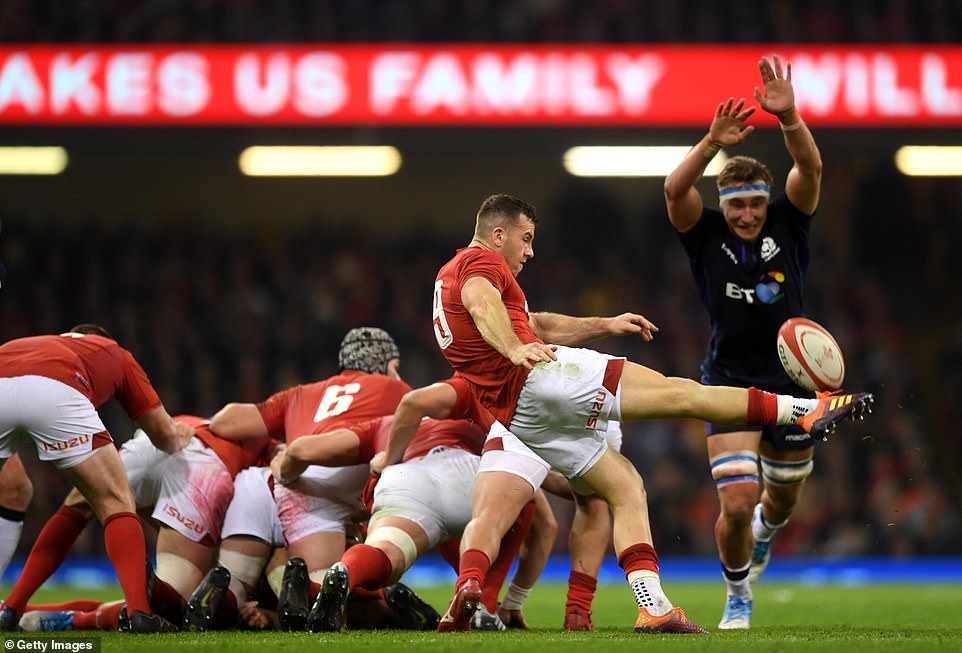 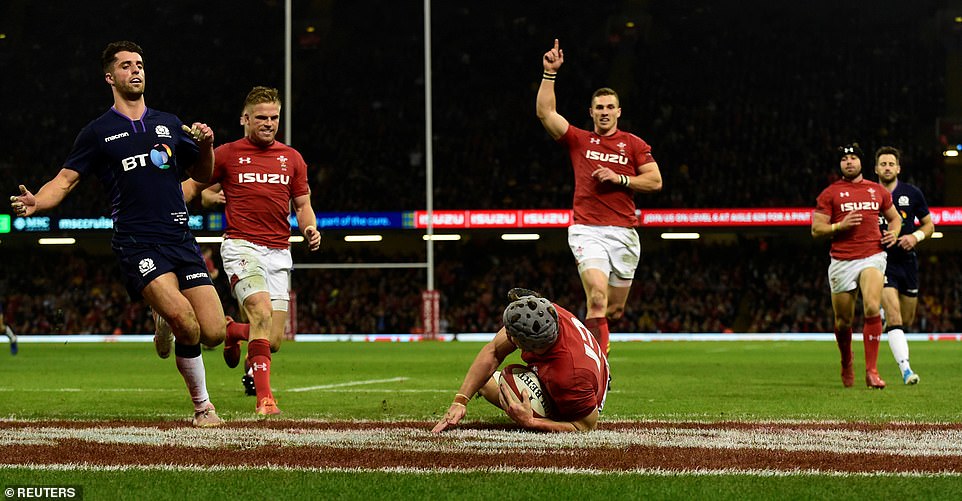 Jonathan Davies then carved his way through the Scottish defence, handing off Huw Jones before running in unopposed 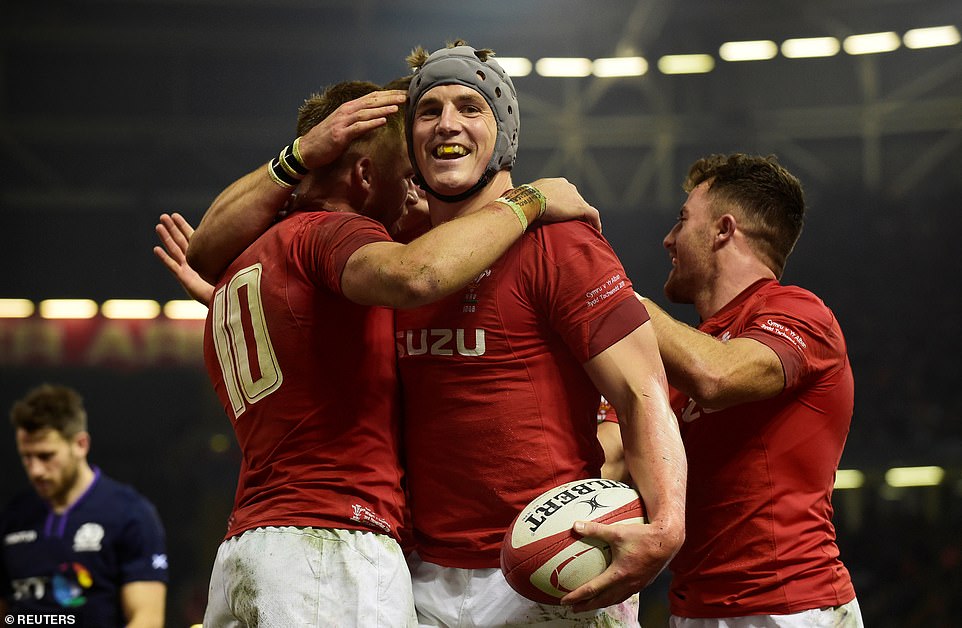 The Wales, Lions and Scarlets centre celebrates with team-mates Gareth Anscombe and Luke Morgan after scoring the try

But he returned a few minutes into the second half, and was on when Wales next scored.

Hot knives through particularly soft butter came to mind for that try. From first-phase ball Anscombe found Davies – winning his first cap for a year after suffering a horrible foot injury last autumn – and the centre carved through.

He fended off Huw Jones, who fell off him far too easily, and powered away to the line. Halfpenny converted and Wales were 11-up and well on their way.

Just after the hour-mark and when Scotland were held-up over the Welsh line, Owens was replaced permanently, with Elliot Dee coming on at hooker – but the replacement was sent to the sin-bin for lurking offside six minutes after coming on.

That saw Owens return to take his place in the front-row for the second time.

The Welsh then had hearts in mouths when Scotland looked to have scored a cheeky try. Replacement scrum-half George Horner dinked a kick from a ruck five metres from the line into the dead-ball area for his brother Peter – but in trying to ground it he and Blair Kinghorn spilled the ball.

That would be it for the Scots, unable ever to gain a true foothold in the game, they were well beaten.

For Wales, a good start, but some bigger beasts need to fall this autumn – starting with bogey team Australia here next week. 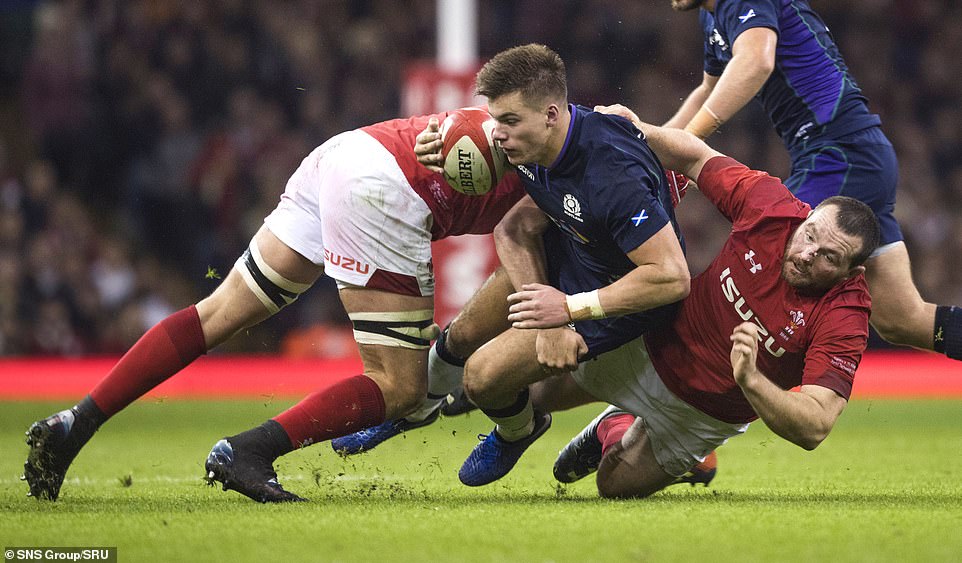 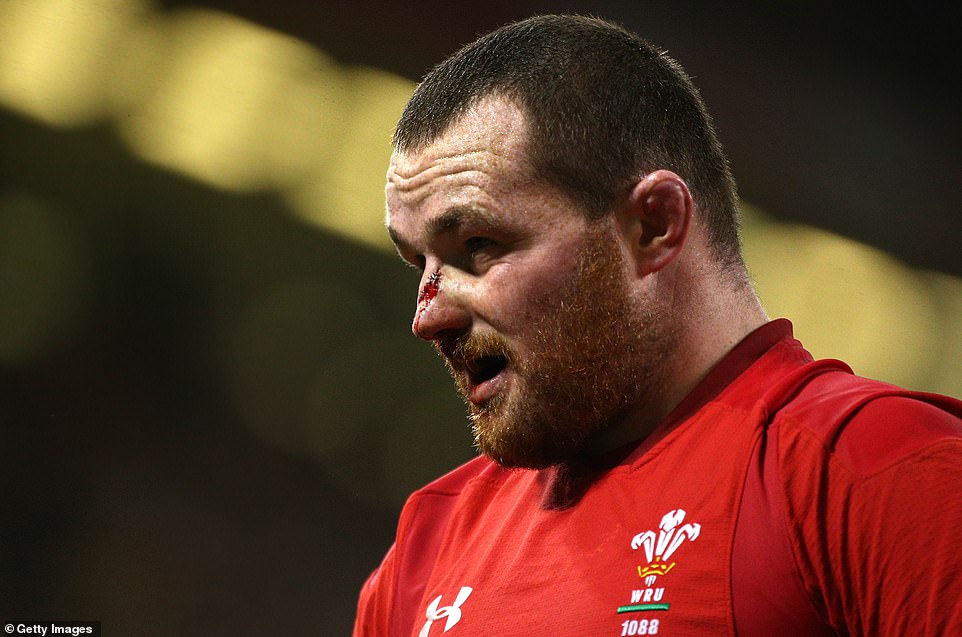 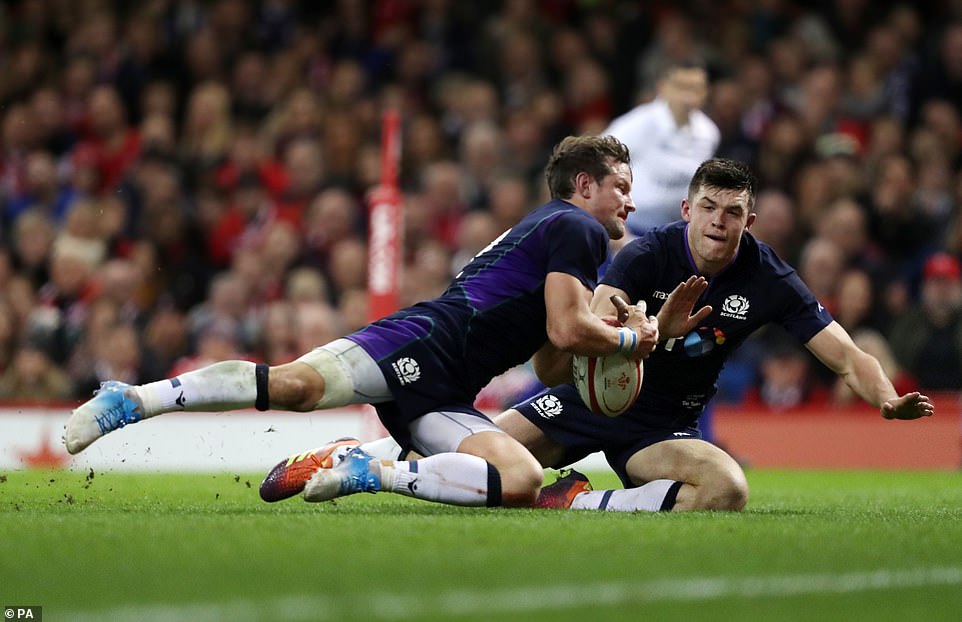 Scotland thought they had scored a crucial try late on, only for the ball to fall through the hands of Peter Horne 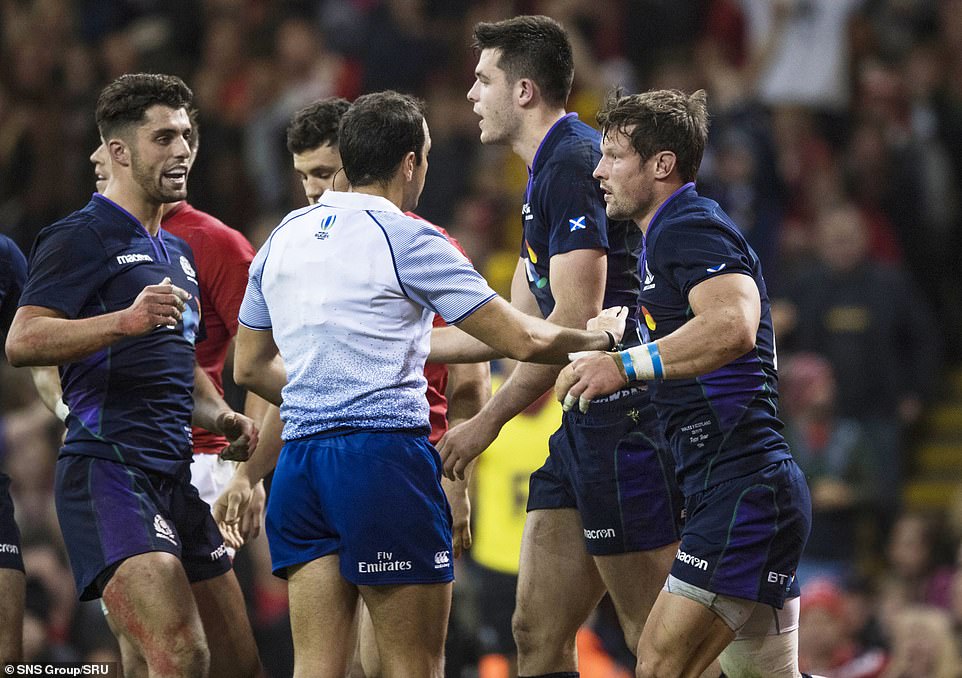