Super Rugby AU starts on Friday with a game between the Reds and Waratahs, a palpable sense of renewal and its unwelcome relative – the threat of another false dawn.

Yet, it should not only be the hopeless optimists among us who approach 2021 with a spring in their steps. 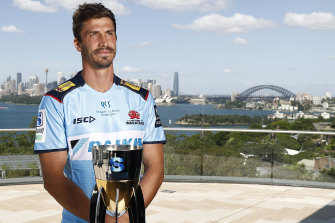 Waratahs captain Jake Gordon with the Super Rugby trophy at the competition’s launch earlier this month.Credit:Getty

That’s exactly what has happened with the goal-line dropout introduced by Australia in 2020, and copied by NZ in 2021.

To make matters better for Australia (and worse for New Zealand), the Kiwis have also introduced a ‘captain’s referral’ rule which looks fraught with danger.

With two challenges permitted in the final five minutes (one from each side) the Kiwis have truly opened Pandora’s box and face the prospect of the closing stages of games being dominated by TMO checks launched by each captain.

Rugby Australia clearly saw the dangers and avoided it, particularly as an attacking team could build a 30-phase wonder try in the last minutes but face the agony of having a wee knock-on or forward pass in phase two of the masterpiece scrutinised after a captain’s referral. Talk about a mood killer.
Add in RA’s determination to speed up the game – and possibly reduce the role as scrums as an outcome-defining factor in the game – and Australia is on the right path to improve the viewing product (and it is a product – we should not shy away from that). 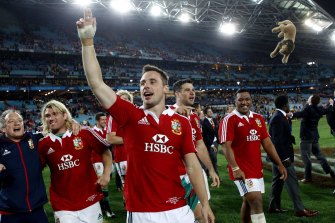 While it may be unlikely, the push to bring the British and Irish Lions later this year is another sign of the new swagger around Australian rugby.Credit:Getty

As for the Lions, excitement levels at the prospect of the tour coming to Australia should be contained until kingpin Rassie Erasmus signals a willingness to do so.

The British were always going to be easier to impress, particularly as the rugby press must be salivating at exiting Boris’ Brexit Britain and spending a nice winter around Perth and Sydney.

But only Erasmus has the sort of capital to sell that idea to his own public, as it remains as appealing as a vegetarian diet to a Boks prop for many, many South Africans.

Nonetheless, at the very least, RA’s proposal and attitude must be winning friends in the right places with the bidding process for the 2027 Rugby World Cup.

It’s smart – and it carves out a role for Australia on the world stage, as an innovator you can do business with (the same applies to the rule changes).

Third, the $10,000 fine and one game suspension for Vunivalu was emphatically clear cut.

On a human level, it was ard not feel a degree of sympathy for Vunivalu as he faced the music in a smart shirt, impeccably groomed.

Certainly, many other players must have been thinking, ‘There go I but for the grace of God’, given Vunivalu’s alleged infraction was only at low-to-mid level range of the dumb things young men do.

Yet that was the point. It sent a stark message to the rest of the playing group: ‘Don’t stuff up this chance with a new partner in Stan/Nine (the publishers of this masthead). There are already enough pork chops in the other code they show without them having to worry about rugby’.

So, where does this leave us before a ball is kicked, or a tackle made? Reasonably placed.

Tradition dictates that we must also submit predictions for the year ahead.

The Brumbies will be hard to beat, because they are so well run.

Coach Dan McKellar withdrew from a Wallabies position last year and was subsequently absent from a Test campaign that turned out to be fairly underwhelming.

So, at the end of last year he had proved his loyalty to the Brumbies and emerged with a better reputation than any other coach working in Australia.

What were we saying about smart?