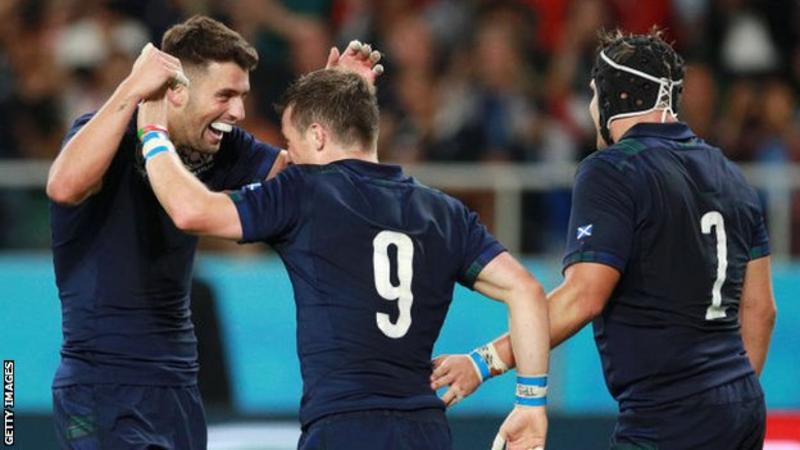 The Scots ran in nine tries to move four points behind Pool A leaders Japan, who they must beat on Sunday to reach the last eight.

“Part of tonight was to share the load, but also bring players off the bench so they get a hit-out,” he said.

“It’s not great for your preparations for a game on Sunday if you’ve got a game on Wednesday, players don’t get to train today, so it was good to see some guys who may be starting against Japan get a run.

“It was really professional, a lot of effort, playing what they see at times, having to deal with a lot of physicality. Russia competed hard at the breakdown, they are a strong team when they carry ball and we dealt with that really well.

“It was a high-paced game, Russia have opened up their game in the last two games, they moved the ball really well against Ireland and they did again tonight. The first action lasted four minutes, 40 seconds, so you know that’s going to take its toll on both teams, so really pleasing to see our team standing strong in the second half and looking even better when the game went into its final minutes.”

Scrum-half George Horne scored a hat-trick of tries, with fly-half Adam Hastings leading the way with the first two scores and kicking eight conversions. The Glasgow Warriors duo each had a try ruled out for a forward pass in the latter stages of a comprehensive win.

George Turner, Tommy Seymour, John Barclay and Stuart McInally were the other men to touch down as Russia wilted in Shizuoka.

“The scoreline might suggest it was one-sided but that first half was very competitive and we had to be really accurate and deliver a performance full of effort to get that scoreline,” added Townsend.

“The half-backs controlled the game really well. We kicked intelligently, Adam especially put the ball in behind the Russians and we forced errors from the Russian set-piece. Our set-piece was outstanding. The work that goes in during the week from our coaches and players to execute what we set out to do was very good.

“It does give us momentum but we know it’s a very quick turnaround. We get three clear days; Japan have had seven or eight days, so they’ll be well prepared.”

‘I have a lot of fun playing with Adam’

Horne’s hat-trick took his Scotland record to six tries in nine Tests and the scrum-half even had a second-half cameo on the wing.

“There was pressure going into the game,” he told 24-year-old told BBC Scotland. “We knew we had to win and score four tries, so to do that and keep them to zero was awesome.

“Russia defended well in the first 20 minutes, but we managed to break them down and execute our game plan really well, and that laid the platform to let us play our game second half.

“I have a lot of fun playing with Adam, we enjoy each others’ style of game. I thought he kicked excellently, he put us in the right areas of the field.”

Job very well done. If you think where Scotland were after that Ireland game, they’ve now won two games with a total score of 95-0. Make no mistake, this is a back-up team and they’ve put a bit of confidence back into Scottish rugby to go into that massive game on Sunday.