Sacked Waratahs coach Rob Penney says he was thrilled by the resilience of his former players to almost down the Brumbies on Friday as No.10 Will Harrison revealed he tried to forget about his crucial missed conversion over a quiet beer at home before a sleepless night.

After a tumultuous week at Waratahs headquarters, which resulted in Penney being shown the door, the men in sky blue did their fans proud despite a heartbreaking 24-22 loss on Friday. 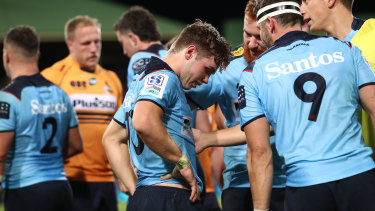 Will Harrison cut a forlorn figure at the end of the match.Credit:Getty

The Waratahs started the match as $11 outsiders and, after a six-day turnaround, were expected to be beaten comfortably at the SCG. However, the young Tahs fought back from a half-time deficit and could have levelled the scores after the siren had Harrison been on target.

Contacted by The Sun-Herald on Saturday, Penney was thrilled by the response, even though NSW fell short of what would have been a sensational victory.

“Just felt very proud of the boys,” Penney said via text message. “The effort has never been an issue, but last night they looked to have more resolve. Loved seeing the boys fight. They are genuine play-off contenders if they keep growing.

“Jake [Gordon] was massive and Izzy [Perese] and Lalakai [Foketi] looked dangerous after another week together. Big shout out to [Will] Harris, Jez [Jeremy Williams] and Maxie [Douglas] too … they stepped up.

“Also what a great job the staff did to get that performance out of the boys.”

Penney has a soft spot for Harrison and would have felt for the 21-year-old, whose after-the-siren sideline conversion attempt soared left of the posts. Had it gone over, the Waratahs and Brumbies would have been headed for the Super Rugby AU’s first golden try period.

Harrison was immediately flanked by teammates and as much as their kind words were appreciated, the young five-eighth admits he replayed the kick countless times in his mind afterwards.

“I didn’t really get the best sleep,” Harrison said. “I switched off and tried to get away from footy. I had a beer with my dad in the lounge room. I went over that moment 1000 times in my own head before going to bed.

“As a kicker you dream about those opportunities. I stuck to my process and tried to stay as positive as I could. Looking back at it, I probably didn’t get through it enough. That’s footy.”

‘Its my job to kick those goals and I didn’t.’

Waratahs coaching staff often speak about the unflappable nature of their young players. If given the chance again, Harrison says he wouldn’t think twice about putting his hand up to take a shot at goal again.

“It’s one you want to get back and you want to get right,” said Harrison, who has battled hip and hamstring niggles in recent weeks but won’t use those as excuses. “I guarantee the next time we get that, I won’t miss.

“I felt I had a responsibility to kick that goal. Having the boys around made me feel a lot more comfortable. At the end of the day, it’s my job to kick those goals and I didn’t. That’s probably going to stay with me until I get another opportunity to hit one.”

Harrison said he was “really upset” by Penney’s departure and paid tribute to the man who handed him a professional debut against the Crusaders in round one last year.

“Sad to see him go, but I’m sure he’ll find a gig,” Harrison said. “He is a really good coach.

“It’s not easy. It was definitely a big blow to us. As players we all had good relationships with Rob, and Rob was always good to us young fellas. We tried to obviously get past it early in the week but we’re rugby players and we’re paid to play rugby.

“We just used that emotion throughout the week to really drive that performance, and even though we didn’t get the win it was a performance for Rob. I think he’s been begging for that for the last five weeks. It’s unfortunate we left it one week too late.”

The Waratahs have a bye next weekend before facing the Western Force and Melbourne Rebels to round out the regular season.