David Pocock will be remembered as one of the greatest Wallabies of all time, but says he will have to live with letting down Australian rugby fans following a defeat to England that has been a painful pill to swallow for the playing group.

When players arrived back in the change rooms following an insipid 40-16 loss to England in the World Cup quarter-finals, Michael Cheika made a short address to the playing group. 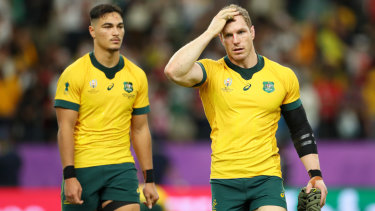 Few words were spoken and there was a hush as the departing coach said his piece in his last match in charge before officially resigning on Sunday.

Bowing out in the quarter-finals is below expectations but hardly surprising for a Wallabies team that has won 23 of 52 matches since the previous World Cup.

“It’s a pretty hollow feeling at the moment,” Pocock said. “There’s no excuses. You know you’ve let down a lot of young fans back home and a lot of older fans who ride the highs and lows. We all know what it was like to be that kid who was watching and just wanted the Wallabies to win. That’s something you’d just got to live with.”

“It was pretty quiet [in the change rooms]. There was not a lot to say after you put so much into it and just come up short. There were no feel good speeches. We’ll head back to the hotel and spend time together.

“I feel like we’ve built really good momentum over the last few weeks. We were very clear with our game plan and executed parts of it but weren’t good enough.”

With 83 Tests to his name, Pocock’s reputation is not tarnished by this latest setback for the Wallabies. When fit, his performances have been superb and will be remembered as an outstanding back-rower whose breakdown work was as good as anyone.

“I think I’m done,” he said. “I’m so grateful for the opportunities I’ve had playing for the Wallabies. As an immigrant rugby has given me so much opportunity. I think it’s time to move onto other things and contribute in other areas.”

The Wallabies' future appears to be bright. A core group of young forwards and some backs with unfulfilled potential could, with the right guidance, make for a serious team at the 2023 World Cup. One of those young forwards is Allan Alaalatoa, who shed some light on a grim Wallabies change room.

“There was no real words,” Alaalatoa said. “For us it was about getting in the change room and feeling that feel that disappointment … that was the message [Cheika] sent. He didn’t go into any detail about the game or about the tournament, it was more so about feeling what it’s like now for those boys who will get the opportunity to put the jersey back on next year.

“He also said for us to stick by each other and connect and enjoy each other’s company for the next few days because everyone knows there is a few men who have worn the jersey for over 100 caps and retiring from international footy. Our squad is not going to get to play together again."