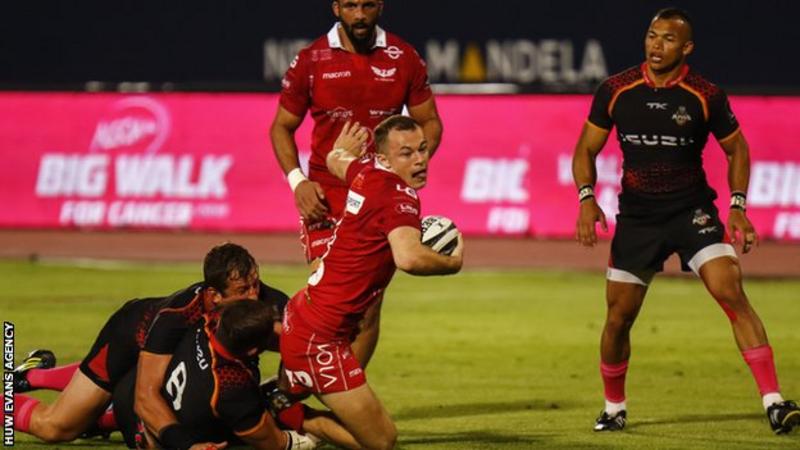 Full-back Masixole Banda was outstanding for Kings with 19 points.

Scarlets were missing a host of players because of international calls and injuries.

Twelve players were with the Wales squad, six were injured, Kieron Fonotia is suspended and Blade Thomson did not travel after the birth of his second child.

Second row Steve Cummins returned to the Scarlets side after suffering concussion against Connacht while New Zealand wing Johnny McNicholl was back after passing a head injury assessment.

The hosts struck first in the third minute with a brilliant individual try from full-back Banda, who carved through the Scarlets defence and also added a conversion and a penalty.

Visiting fly-half Jones opened their account with a penalty.

Kings responded with a brilliant length-of-the-field try that was finished by wing Yaw Penxe after he collected a chip from Banda.

Scarlets hit back with a try from hooker Dafydd Hughes, a late replacement for the ill Marc Jones. Dan Jones converted before Banda slotted over Kings second penalty.

King were denied a third try, by Martin Du Toit, because of a forward pass before Scarlets flanker Boyde was driven over from another attacking line-out with the last play of the half to trail by five points.

Scarlets took lead for first time just after half-time as Nicholas sprinted over before Kings restored their advantage as centre Harlon Klassen crossed.

The home side scored the bonus-point fourth try from another Scarlets turnover as wing Bjorn Basson collected another chip kick from centre Berton Klassen.

Prop Kruger crossed for the Scarlets’ bonus-point touchdown from close range before the visitors took the lead again with seven minutes remaining.

Replacement scrum-half Hardy’s try was awarded after a long deliberation by the TMO Sean Veldsman.

The home side’s frustration was highlighted when replacement prop Luphumio Mguca was yellow-carded.

Scarlets forwards again showed their dominance with the driving maul with a try for replacement hooker Taylor Davies, his first for the region, and they held out in the dying moments.