‘It’s been a whirlwind of a year’: Lewis Ludlam nearly swapped rugby for a job in finance 12 months before his World Cup call-up… now he’s desperate to become an England star

Stored away in the corner of the living room, among the collection of vinyl records and skateboards, is Lewis Ludlam’s England kitbag.

Barely a week has passed since he returned from the World Cup final in Japan but he has already packed his bag for the Six Nations.

‘It’s staying there ’til February,’ he explains. ‘Something to look at. Something to aim for.’ 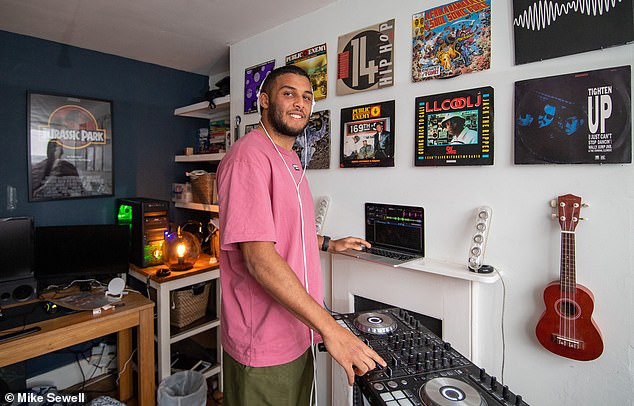 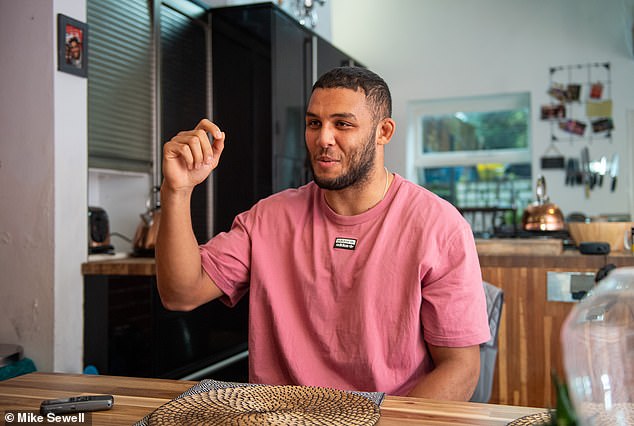 The runners up medal, however, is with his father, Arron, in Ipswich.

‘I gave the medal to my dad,’ he adds. ‘It’s there, I’m proud of it, but it reminds me there’s still something to achieve.’

Returning to the grey, wet terraced streets of Northampton was not quite the homecoming Ludlam had dreamed about. No victory parade around the streets of London. No trophy. Instead, his first day back on home soil was spent repairing a broken boiler.

‘Coming back to normal life was a bit of a shock to the system,’ he says, speaking over a cup of tea in the home he moved into eight months ago. ‘We didn’t have any hot water because the boiler had packed in and my car lease had expired so I had to get taxis everywhere. 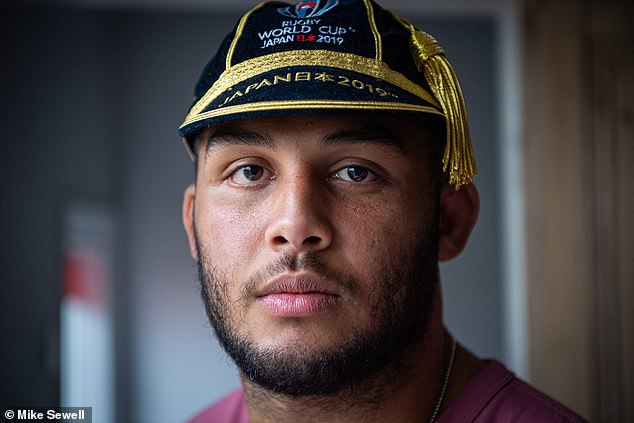 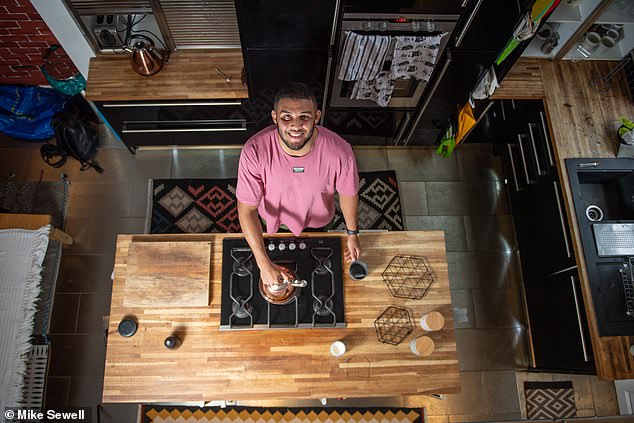 ‘Funnily enough, this one taxi driver was like “So, did you watch the World Cup?” I was like “Yeah, yeah, they did alright, didn’t they!” It was funny but as tough as it was to lose in the final, it was cool just to hear normal people talking about rugby.’

Many people in the rugby world are still unfamiliar with 23-year-old Ludlam’s face. He was Eddie Jones’ wildcard selection and simply being called up is still sinking in — let alone the notion of losing to South Africa in the final.

In the summer of 2018, his rugby career was at a crossroads. Finding a contract was a struggle and he sat down with his father to discuss the prospect of becoming a financial advisor. He is a rounded individual, with an interest in music and painting, and swerved an office career in style as he boarded the flight to Japan in September.

‘It’s been a whirlwind of a year,’ he says. ‘I sat down with my dad last season and he said ‘You’d better start getting prepared for life after rugby’. I was doing some art on the sides — these abstract skulls (showing an image on his iPhone) — but that was never going to make me a whole lot of money.

‘I had some meetings about the finance thing and my plan was to save a bit of cash and then travel around the world. Things changed when Chris Boyd came to Northampton. He gave me the confidence to rip in. Then Teimana Harrison’s missus went into labour during the England Saxons week in June and I got called in to cover him — while I was on a train to London for a team social!

‘That week was the first time I’d met Eddie. He just said, “Keep yourself fit and keep working hard”. I didn’t play in the BaaBaas game and never really expected anything to come of it. 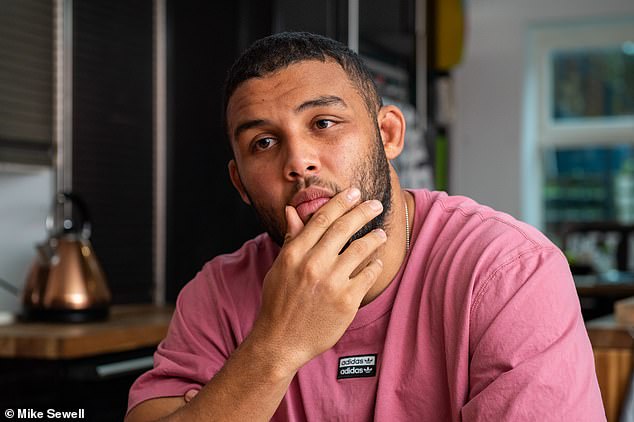 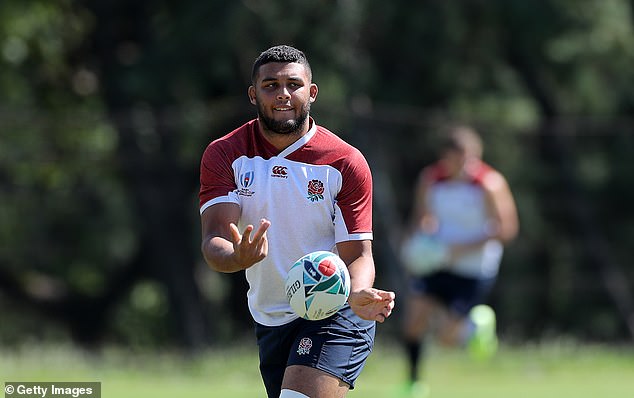 ‘I flew out to Bali for a holiday, came back from the beach and my agent called to say “Check your emails”. I checked my emails and there was an invite to the Rugby World Cup camps. Initially, I just thought I was there to make up the numbers, but it’s weird how your perception changes.

‘I went from just wanting to play a season at Saints to hoping to be in the England camp, to wanting to be on the plane to Japan, to being a little bit gutted that I wasn’t picked to play against the All Blacks in a World Cup semi-final. The whole thing still hasn’t really sunk in. I look back on it with fond memories. I never expected to be there so it was all a bonus to start with.

‘Everyone was telling me I wasn’t meant to be there. In Miyazaki, when the France game was cancelled, we sat around the fire and all of these guys who were strangers to start with felt like a group of brothers — as cheesy as that sounds.

‘I wasn’t on the pitch for it but we beat New Zealand when no one outside thought we were going to touch them. Seeing that come to life was a highlight. It’s easy to get lost in results but when you look back, it was a really special thing to be a part of.

‘I’ve thought about the final a lot and I honestly can’t think of anything we’d have done differently in the build-up. We did all of our analysis and we couldn’t have had a clearer game plan. It was just unfortunate that we had one of those days in a World Cup final.

‘It’s a tough one to swallow but I can’t put my finger on why it didn’t really click for us that day. Obviously it was pretty dark in the changing room afterwards. 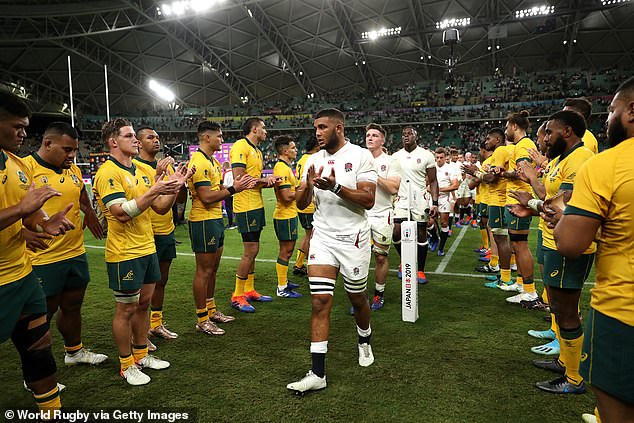 ‘Faz (Owen Farrell) spoke excellently, reminded us how hard we’d worked for each other and for our families and it was nice to have a couple of days together at the end of it.’

Ludlam returned home with a parting message from Jones, who laid down a challenge to the flanker.

‘In the changing room straight after the final, Eddie said to me: “You’ve got an option now — do what you’ve always done, be steady, and have eight, nine, 10 caps or work even harder, take control of your career and be one of those guys who has 70 or 80 caps”.

‘I had the same message from John Mitchell. It’s a case of getting straight back on the horse, isn’t it? I know I’ve still got a hell of a lot to prove.’

Ludlam’s introduction to the increasingly diverse England fold is a welcome one. His maternal grandmother, Elaine, was a Windrush generation West Indian from Guyana. His other grandmother, Isis, left Palestine for Lebanon and then the UK to escape trouble in the Gaza Strip. Ludlam himself grew up in Suffolk, away from privilege, until he was granted a rugby scholarship at St Joseph’s College, Ipswich.

‘In the back of my mind, I’ve come from a family of fighters,’ he says. ‘People who want to do good. My dad was a boxer, a fighter. My nan was a fighter, trying to flee Palestine. My other nan worked tirelessly as a nurse when she came over during Windrush. She fostered God knows how many children and my granddad built train tracks. 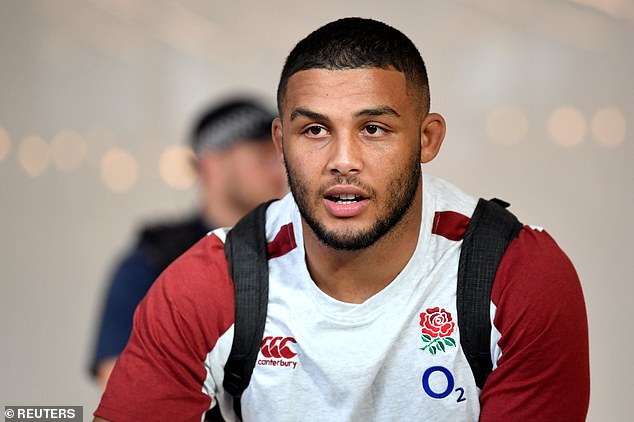 ‘When I went to St Joseph’s, I felt like the Fresh Prince of Bel-Air at Hogwarts! Private school was never really on the cards and they were really supportive.’

On Sunday afternoon Ludlam will be back to the day job with Northampton. He will start against Lyon in the Champions Cup and hopes to return to winning ways.

‘I’ve taken a lot of confidence from being involved in a World Cup and hopefully I can transfer that,’ he says. ‘I’ve got the highest ambitions. For us to win the European Cup, win the Premiership — crazier things have happened, like me going to a World Cup.

‘I know it’s not going to be easy but I’m looking forward to working hard and hopefully achieving some dreams. I’ve learnt over the last year that anything is possible.’