Ireland 54-7 Italy: Irish score eight tries in Chicago as they dominate on return to scene of All Blacks glory

Ireland will have sterner tests than this and play in more hostile environments, but their return to Soldier Field went off without a hitch as they ran in eight tries in Chicago.

As things often transpire against the Azzurri, Joe Schmidt’s side had to negotiate a valiant first half performance from their opponents before pulling away after the break.

This was the venue where Ireland made history against the All Blacks two years ago but the similarities ended there. There wasn’t a spare seat in this arena for that encounter in 2016, but Soldier Field looked less than half-full on Saturday. 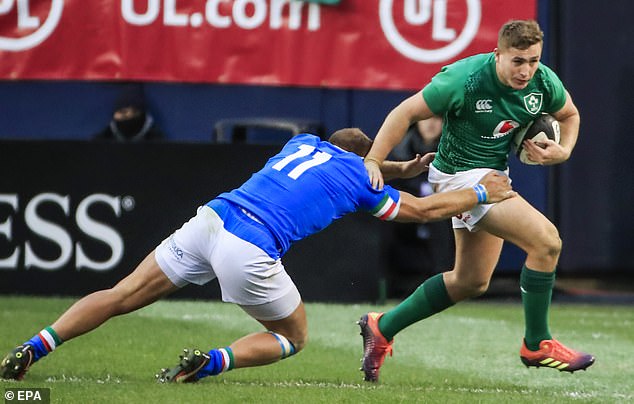 Terms like ‘cash grab’ and ‘contractual obligation’ were thrown about for most of the week and you would struggle to argue otherwise, but Ireland head coach Schmidt will feel it was a worthwhile exercise.

He will be especially pleased with Tadhg Beirne and Leinster wunderkind Jordan Larmour who were handed their first Test starts, the pair both catching the eye as Beirne bagged a brace and Larmour crossed for a brilliant hat-trick.

Ireland came firing out of the blocks straight from the kick-off as Jacob Stockdale bounced Italy hooker Luca Bigi onto the deck before setting off on a 40-metre dash down the touchline.

Ireland moved into their phase play with Jack McGrath, Quinn Roux and Bundee Aki making big carriers. Garry Ringrose then cut back against a stretched Italian defence but a despairing ankle tap denied the Leinster midfielder an early try. 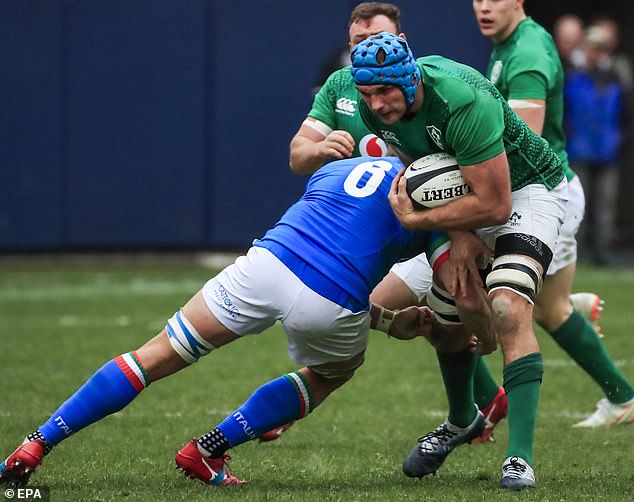 Two minutes later, Ireland were in for the first try of the afternoon. Beirne rising high in the lineout before taking the peel from Josh van der Flier to rumble over from the resulting driving maul. Carbery added the extras as Ireland surged into an early 7-0 lead.

Then followed a good period of Italian play, Carbery twice falling off tackles after big carriers from No 8 Renato Giammarioli and centre Michele Campagnaro.

The Azzurri were being forced to make a flurry of tackles with brilliant interplay between Larmour and Conway set Carbery striding into space. Rhys Ruddock ran a hard line off Luke McGrath from the next ruck but some desperate scrambling Italian defence prevented another the score.

Ireland were very much in control in the opening quarter but Schmidt will be furious with Carbery’s loose pass which was picked off by wing Giulio Bisegni.

On the ropes early on, the Italians worked their way back into the contest with flanker Abraham Steyn looking lively in the loose but basic handling errors ended a string of promising attacks.

Italy captain Campagnaro was released by Exeter Chiefs last month but it will only be a matter of time before the fleet-footed midfielder picks up another club. His deft offload sending Steyn rampaging into space. After 14 phases, Steyn made a lunge for the whitewash but a brilliant double tackle from Jack Conan and Larmour did just enough to halt the powerful openside. 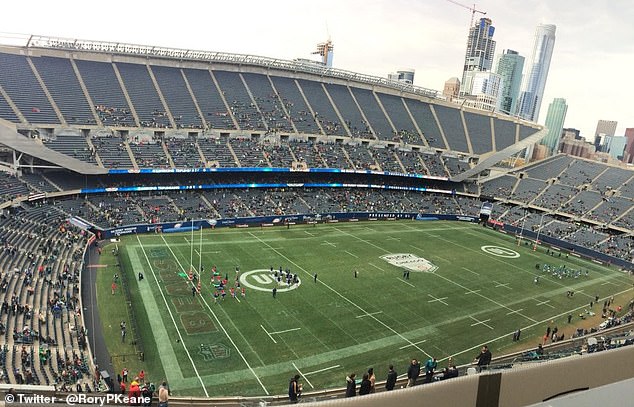 Conway barely touched the ball but he sparked Ireland back into life after 32 minutes. The Munster wing took scrum-half Tito Tebaldi’s kick with authority laying the platform for Larmour to dance his way through Bigi’s tackling before sending Luke McGrath in as Carbery once again added the extras.

Italy’s deserved more and the 14-0 scoreline did not reflect their endeavour. They hit back just before the break when Campagnaro – who else? – read Ruddock’s inside pass, intended for Larmour, and raced under the posts. Carlo Canna made no mistake with the extras. Game on.

Ruddock atoned for his first-half gaffe by snaffling Tebaldi’s errant pass. Ringrose and Aki surges laid the platform and Beirne finished off the attack with a smart line to crash over and bag his brace.

Larmour then picked off a dreadful pass from Luca Sperandio to race away from 40 metres out. Carbery converted both efforts and Ireland were 28-7 to the good. In a flash, they were pretty much out of sight. 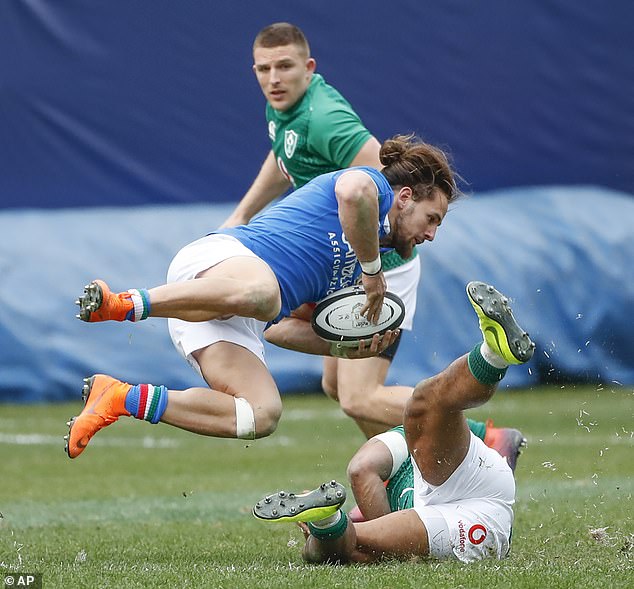 It was a matter of when, not if, the next try would arrive as Sean Cronin, on for Niall Scannell at half-time, rumbling over form a surging lineout drive. A sixth try on his 63rd appearance for country for the Leinster hooker, the ever-present impact sub.

Ross Byrne and Will Addison entered the fray on the hour mark to make their Test debuts. Addison, interestingly, slotting in at fullback with Larmour moving to the wing. He was barely out there 60 seconds when he got the ball in space and weaved his way through for a brilliant individual score.

It was getting nasty for Italy now as Aki sent Ringrose racing over in the corner. Byrne’s touchline conversions making it 49-7.

Fittingly, Larmour raced away for another stunning effort to complete his hat-trick. That will give Schmidt plenty to think about over the next few weeks.