I’m conscious of not coming across as too much of a cheerleader for Rob Penney, who is a good mate and a man I have the greatest respect for.

So it will come as no surprise I was upset and bewildered at the news on Sunday that his contract had been terminated. I’ve already made it clear this week I believed it was the wrong decision, even despite a string of heavy losses. 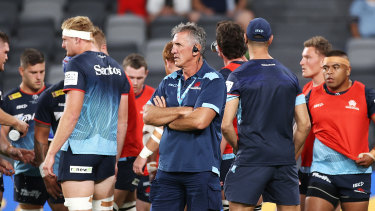 Rob Penney was axed as Waratahs coach on Sunday. Credit:Getty

However, the Waratahs’ valiant 24-22 defeat to the Brumbies on Friday night only crystallised how bad a decision it was to move Penney on.

There is absolutely no way Friday’s much-improved effort at the SCG was a reflection of the change in coach this week. Assistants Chris Whitaker and Jason Gilmore, as well as Matt Cockbain, would have had no more than one or two sessions between Penney’s sudden departure and the match, so there would have been no reinventing the wheel, no significant deviation in tactics, just some real tenacity showed by a young group of players under adversity against Australia’s premier team in recent years.

It’s hard to know from the outside whether the performance was due to a group response from the shock of their coach being sacked – I prefer to believe this, of course – or whether the players felt liberated with Penney no longer in the sheds. I concede the latter is a possibility.

At the end of the day, a key part of the coach’s role is motivating the players. 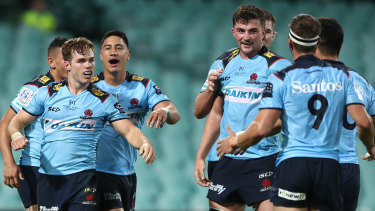 The Waratahs were vastly improved on Friday night against the Brumbies.Credit:Getty

Nonetheless, the effort areas were a bright spot for the Waratahs, even though they didn’t get the win. To hold the Brumbies scoreless in the second half is something they can hold their head high about.

It shows that, with time and patience, plus some astute recruitment for next season, Penney should consider himself unlucky to have been sacked mid-season. He was thrilled by the lift in intensity he saw from the young Tahs.

The reality is Rob wanted to just coach, but not get involved in politics. If he’d been more of a political operator he may have given himself an insurance policy a few weeks back by letting the board know about bigger issues at play.

There is plenty of potential in this NSW team, most notably in the midfield, where Lalakai Foketi and Izaia Perese are forging a strong combination despite a scarcity of quality opportunities.

The confidence boost for Waratahs will be invaluable, even if they are still 0-6. Being so young across the board, the habit is still to revert to structure – which is a strength in lower levels of rugby, such as schools and under-20s, but a weakness in the professional context when it is not aligned with strong situational decision making. Hopefully confidence will contribute to greater initiative and spontaneity, leading to less predictability and, ultimately, being harder to defend against. 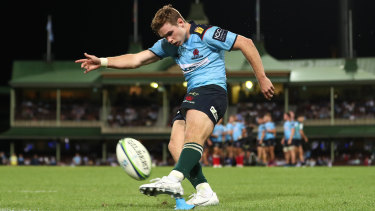 Will Harrison missed a final-minute conversion on Friday night, but was impressive throughout. Credit:Getty

I thought the influence of NSW halfback Jake Gordon was significant. His game was polished but it was clear the focus and energy of all those around him was heightened. He looked super motivated and was jumping out of his skin being back on the park.

Having him back as captain is better for Alex Newsome, too. It’s very hard to captain the team as a winger, particularly in a team of young players.

When you look at the squad as a whole, you don’t want to be beating up on individual players. Yes, they know they are inexperienced, but that doesn’t mean they aren’t good enough.

The unfortunate problem the Waratahs have is they are developing a lot of young players at the same time.

The organisation in defence was very good and the team as a whole was much smarter in that aspect. Not overcommitting to the breakdown left them with good numbers in the line so they could move up quickly. They didn’t concede easy metres that would have allowed the Brumbies to control the tempo.

Let’s not forget though that Gilmore was the defence coach. Penney wasn’t in charge of that department. All of a sudden it changes?

However, there is still the same lack of care and accuracy in attack for the Waratahs. There were too many unforced handling errors and inaccurate passes. The ball regularly gets thrown too deep, either to No.10 Will Harrison or the wider runners, negating any gain that has been made in a previous phase.

The Brumbies were reasonably insipid by their own standards. Since their opening two wins, they have struggled to put long periods of consistency together.

They are still extremely dangerous when they turn it on in patches and can score quick points seemingly effortlessly, as we saw in the first half, but they are not playing anywhere near their potential based on Friday’s showing.

Andrew Mehrtens is a New Zealand rugby legend who scored 967 points for the All Blacks in 70 Tests. He is part of Nine and Stan Sport’s commentary team.