Schmidt fielded an experimental team missing many of the players who won the Six Nations Grand Slam this year and the Italians made it tough in the opening period, despite Beirne grabbing his first try in the third minute.

Scrumhalf Luke McGrath, centre Garry Ringrose and substitute hooker Sean Cronin all touched down for Ireland, with Joey Carbery adding five conversions and Ross Byrne two as the Irish led 14-7 at the break before running riot in the second half. 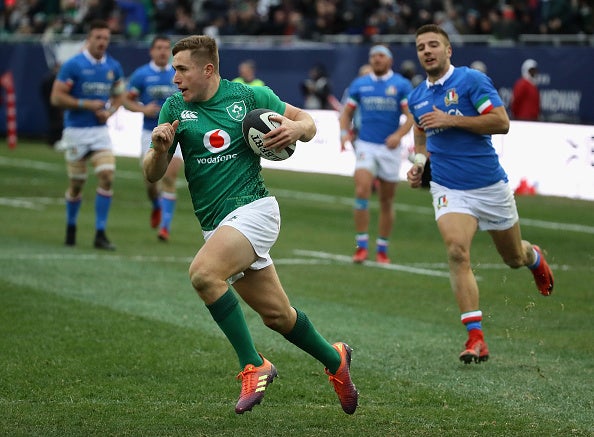 Italy captain Michele Campagnaro intercepted a wayward pass by Rhys Ruddock and sped away for a first-half try for Italy that was converted by Carlo Canna, but the Irish proved far too strong in the second period as they cruised to a big win.

Larmour used his blistering pace and deft footwork to set up McGrath for Ireland’s second try in the 32nd minute of an error-strewn first half.

Campagnaro’s try just before the break gave Italy hope, but when Beirne went over for his second try three minutes into the second half it heralded the start of 40 unanswered points from the Irish. 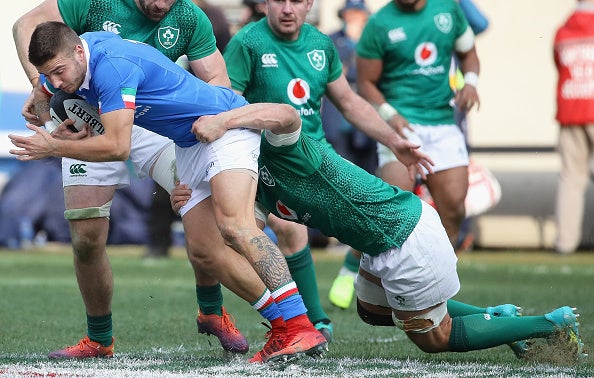 Softened up by the bruising first half and hampered by inaccurate passing and weak tackling, the Italians had trouble filling the holes in their defensive lines and the Irish backs poured through almost at will.

Campagnaro had a pass picked off by Larmour, who sped unhindered to score Ireland’s fourth try and Cronin bulldozed over to rock the Italians back on their heels.

The Irish backs then took over, with Ringrose drawing two defenders to free up Larmour to score from the left wing before crossing himself in the opposite corner.

Larmour added his third in the final minute, blazing up the left wing to complete his hat-trick and grab the man of the match award.