London: Australia is set to host the 2027 men’s Rugby World Cup and England the 2025 women’s tournament after both countries were listed as the “preferred candidates” in a new approach by World Rugby.

The World Rugby Council approved revisions to the World Cup host selection process, including a preferred candidate phase that the body hopes will help maximise the growth of the sport worldwide. 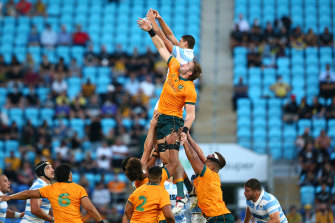 Final hosting rights will be awarded in May 2022, but Australia is the preferred candidate for the 2027 World Cup.Credit:Getty Images

An “exclusive targeted dialogue” would continue with the United States in regard to hosting the men’s World Cup in 2031 and also a women’s edition at some point in the future.

Final hosting rights will be awarded by the council in May 2022, World Rugby added.

“The new approach to electing Rugby World Cup hosts is more flexible and collaborative, with World Rugby working with potential hosts to optimise … proposals and align them with long-term social and economic development plans for the benefit of their communities and the future expansion of the sport,” World Rugby Chairman, Sir Bill Beaumont said in a statement.

The organising body said discussions were ongoing with a number of interested parties for the women’s 2029 tournament.

“We are delighted to have been awarded preferred candidate status for Rugby World Cup 2025,” RFU CEO Bill Sweeney said.

“Hosting it will be incredible, our ambition is to stage the best attended women’s RWC ever, with nationwide qualifiers and a sellout final at Twickenham Stadium.”

The next women’s Rugby World Cup was postponed until next year in New Zealand due to the COVID-19. The next men’s tournament is due to be held in France in 2023.

Sports news, results and expert commentary. Sign up to our Sport newsletter.