Australia’s players in the men’s sevens have been preparing for Tokyo’s humidity and potential wet weather by lathering baby oil on rugby balls to sharpen their handling skills.

Before Monday’s opening day of sevens action, Australia coach Tim Walsh said no stone had been left unturned in preparing his group for the challenge ahead. 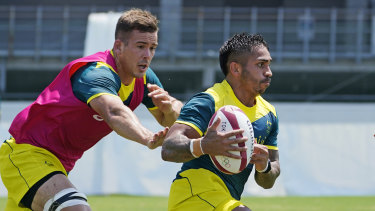 Temperatures of more than 30 degrees will greet teams from around the world, making ball-handling difficult.

To make things worse, rain is forecast for Australia’s opening matches on Monday against Argentina (11.30am AEST) and South Korea (7pm AEST).

Walsh, who coached Australia’s women to a gold medal in Rio, has used an old trick by lathering up rugby balls at training and throwing them in the air for players to grab and run with. 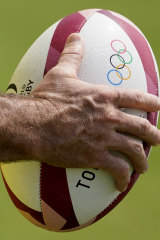 A member of Australia’s men’s rugby sevens team holds a ball during a practice session in Tokyo.Credit:AP

“While a lot of our focus has been on heat preparation, it’s been challenging to replicate the rain,” Walsh said.

“We’ve been utilising plenty of water on the balls and even going as far to put some baby oil on the balls to make them extra slippery. When preparing the team, you need to train for all different scenarios.

“When you look at the environment of Japan, we knew there was a possibility of heavy rain and even typhoons.”

Australia’s women, who begin their campaign on Thursday, are a decent chance of making the gold medal match – likely a final against New Zealand – but the men in gold will struggle to win a medal given their form.

“We’ve prepared as best we can,” Walsh said. “Now it’s time to be brave and show Australia and the world how we play.”

Australian players posed for photos with NBA star Kevin Durant, while others showed off their cricket skills during an impromptu game.

No Australian rugby player – male or female – attended the opening ceremony, with Walsh keen to keep his squad as fresh as possible before clashes against Argentina, South Korea and New Zealand.

“It’s a beautiful facility,” Walsh said of Tokyo Stadium. “The surface is fast, which suits our gameplay. The atmosphere, despite being empty, is incredible.

“The venue is very convenient, comfortable, and a great way to spend three days of the Olympics.

“When you’re on the World Series, you play in some incredible places … they’re always top-notch and Tokyo Stadium is no different.”

Meanwhile, the big match for Australia’s women is their final pool fixture against USA.

In Rio, the sides played out a 12-12 draw before Australia kicked on to beat New Zealand in the final 24-17.

“Both teams probably play a similar style to what they played back then [in 2016],” Australian star Charlotte Caslick said. “But I think we’ve got quicker and faster, as well as the game in itself has developed.

“They are big athletic girls. They have some world class players in there like Alev Kelter, so they are definitely not going to be easy beats and we’re going to have to be switched on.”