Tough Essendon on-baller Zach Merrett took another step forward in his recovery from a minor ankle injury when he joined in match simulation for a short period at training on Thursday.

Merrett had been training well in the lead-up and he played on the wing for about 20 minutes, where he was particularly lively. He even became involved in a minor scuffle with teammate Devon Smith at one stage as the ball crossed the boundary line. 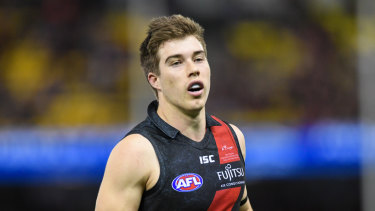 Zach Merrett is progressing well in the lead-up to the season.Credit:Morgan Hancock

Merrett then continued his running away from the main group as the match practice continued.

Star forward Joe Daniher, who played just seven games last season as he battled osteitis pubis, again took part in match simulation, playing the first half up forward and in the ruck.

He looked good inside 50 matched up against Patrick Ambrose and led strongly for the ball.

Daniher spent the second half training with the rehab group that includes defender Cale Hooker, who is being managed conservatively on his way back from a hamstring injury.

Essendon captain Dyson Heppell also played a half, signalling his recovery from hamstring tendinitis is on track.

The star midfielder played on the wing and across half back, and the club is confident he is progressing well.

Stringer also showed his class at the centre bounce at times, with his acceleration from clearances evident.

Smith looks to have no after-effects from a deep bruise to his biceps that he sustained a fortnight ago.

Star players Dylan Shiel, Michael Hurley and Andy McGrath did not take part as they are playing in AFLX on Friday and were training with their teams on Thursday to prepare for the tournament.