If the first two weeks of the season was proof the coming years will be bright for Sydney, then the events of Easter Saturday at the MCG was evidence the Swans’ future is now: they have arrived.

It may be too early to say definitively that the 17 rival captains got it wrong by leaving John Longmire’s new breed out of the eight but on the basis of the first three rounds, anything short of a return to September action in 2021 for the Swans would be a disappointment. 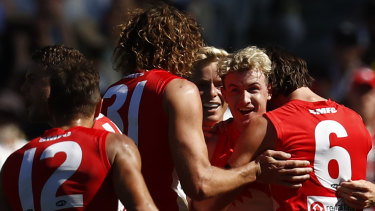 Young gun Chad Warner celebrates a goal during the Swans’ rout of Richmond at the MCG.Credit:Getty

This was a coaching masterclass by Longmire, whose plan was carried out to perfection by his undaunted young charges.

The side that finished 15th and 16th the past two years destroyed the back-to-back premiers. They avoided the chaos mode that Richmond’s system thrives upon, eschewing the long kicks that inevitably result in turnovers with speed and precision.

The Swans played with no fear, be it at the contest, where they were superior, or with their ball use. When in the clear, their play was electrifying.

Take the five-minute period leading into half-time when they piled on four goals to stretch the margin out to 40 points at the long break.

From the centre bounce after Isaac Heeney had curved a set shot through, Warner burst out of the middle, Dustin Martin-style, for a long-range goal. 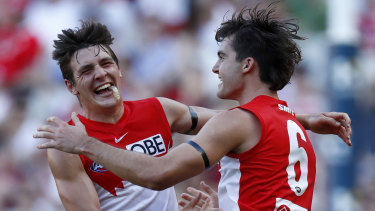 Logan McDonald joins in the celebrations after kicking a major.Credit:Getty

Three minutes later, McDonald was at the end of a chain of possessions that started deep in defence with fellow gun recruit Braeden Campbell. Then after the half-time siren, Wicks – another Swans academy graduate – converted from about 35 metres out.

The days of the Swans being reliant on Josh Kennedy and Luke Parker appear gone. Callum Mills is warming to his new role in the middle.

Warner, like his cricketer namesake, is a bull at the gate. Jordan Dawson plays like a taller version of Nick Malceski. The latter duo were both later picks.

Wicks, a rookie via the academy, has become a livewire forward, adding offence to the tackling pressure that earned him a debut last year.

Seldom in recent years have the Tigers been so uncompetitive, disorganised and dispirited.

That they were still nominally in the game at quarter-time was due more to the Swans’ inaccuracy in front of goal.

Their midfield was well beaten and their system, which keeps them in so many games, dysfunctional. 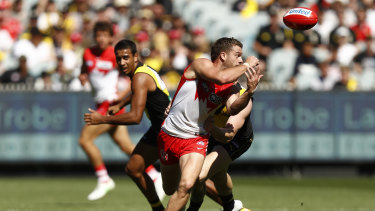 Tom Papley gets a handball away under pressure.Credit:Getty

Dustin Martin and Trent Cotchin were buffeted from the first bounce, in a statement of intent by the Swans, and had little impact. Dion Prestia’s absence was keenly felt after being subbed out minutes into the game.

Their backline buckled under the volume of clean entries, unable to combat the Swans’ run.

Though Tom Lynch swelled his account with three in the second half when the game was lost, Jason Castagna was their best forward.