Home » Rugby League » Will the NRL return to a two-referee model?

The NRL has sought the opinion of every club coach and chief executive and will consider online survey responses from thousands of fans as it ponders one of its biggest off-season decisions – whether to stay with one referee or revert back to two.

Head of football Graham Annesley credits the switch to a single whistleblower, implemented during the COVID break – as helping "create a better spectacle" and reducing the amount of refereeing mistakes, as the NRL prepares to tackle a number of on-field issues. 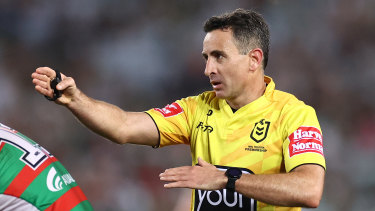 There had been tension between the NRL and Professional Rugby League Match Officials for weeks over the controversial call to return to one referee, which was made alongside the introduction of the six-again rule to speed up the game for ruck infringements.

"I've got a personal preference for the single referee model, but my opinion doesn't carry any more weight than anyone else's," Annesley said. "That's my view.

"It was a risk when we went back to it because we didn't have any data to gauge it against, but now with a season's worth of data my perception is we've seen far less on-field refereeing errors. There has still been certain controversial incidents, but far fewer of them are being generated by the referee.

"I think the game has been a better spectacle with not having the two referees. Perhaps we don't have two opinions for each decision when they might not correlate with each other.

"We'll look at the physical impact on referees and, as much as we can, the emotional impact on them, as well as game stats including ball in play and number of stoppages. Ultimately, the committee can't make the decision. All it can do is make a recommendation to the Commission and the final decision is entirely with them."

The referee conundrum will be one of the major areas of debate for ARLC chairman Peter V'landys, who has also highlighted the prospect of a major overhaul of scrums next month.

The NRL will also assess a final round rule it trialled allowing the bunker to analyse on-field try decisions while the goalkicker lined up a conversion.

Away from on-field matters, the NRL will be back at the negotiating table with the Rugby League Players Association this week as they seek agreement on a pay deal which would provide certainty over next year's salary cap.

The AFL Players Association last week agreed to a revised Collective Bargaining Agreement which cut nine per cent from total player payments and additional services. But it also came with a reduction to squad sizes, meaning players retained for 2021 would only face a pay decrease of 3.5 per cent.

The NRL has already flagged it won't change squad sizes with V'landys insisting each NRL club will have a top 30 next year.