On Sunday evening, in the immediate, grey gloom of Carlton's limp loss to Essendon, the decision to remove Brendon Bolton was finally made by a Carlton hierarchy that had been holding off a sacking has seemed almost preordained since early in the season.

The Carlton board communicated their position to one another in the evening, prompting a Monday morning meeting between the three key officials – president Mark LoGiudice, chief executive Cain Liddle, football boss Brad Lloyd – and the coach, who had also received a clear hint from Liddle the previous week that he was in strife. 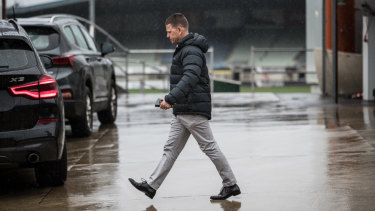 Not that Bolton – or anyone in the AFL universe – really needed to be told. No coach will endure the kind of numbers that Bolton posted over the past season and a half, no matter what alibis or excuses can be put forward in his defence – including the ground zero rebuild that Stephen Silvagni orchestrated.

The Blues sat two games behind the 17th team and, if anything, they'd regressed from the string of honourable losses in the opening six or seven rounds.

The measures of desire – particularly pressure ratings – were not up to scratch, and sporadic effort wasn't accompanied by a consistent, effective method of play either.

The Essendon game underscored this. The Blues did manage to scramble the ball forward 50 times against the Bombers, but they kicked to Cale Hooker and Michael Hurley as though they wore blue jumpers, that pair managing an astounding aggregate of 27 intercepts – a sign of a system breakdown as much as poor decisions with the ball.

Impotent Carlton couldn't score, in what was a familiar plot line.

The hierarchy's clear preference had been to stay the course with Bolton for as long as possible, but the sheer volume and nature of the losses – the accumulation of them, as Liddle put it – meant the axe fell two weeks before the club's bye, rather than after it.

Despite the various statements of support for Bolton this year and embarrassing protestations that the club was backing him, the Blues have made the correct call; it is hard to imagine many of their rivals hanging on to a coach with that record for as long as they did.

If anything, the Blues had postponed the sacking, clinging to the increasingly dim hope of a turnaround. No one said it, but the suspicion is that they stuck with Bolton for as long as they and their supporter base could bear because they didn't want to reinforce the damaging cliche that Carlton executes coaches like no other club.

Brett Ratten was sacked with a season remaining on his contract, and had a significant payout. Bolton, too, will be looked after financially, having an employment agreement that was the equivalent of a contract for 2020. As I wrote at the time of the Ratten sacking, to honour a contract at Carlton means paying it out in full.

If it is tempting to see this decision as expedited by Brad Scott's exit, and the prospect that St Kilda and/or even Essendon might join North in the market for a coach. But Carlton's primary need was to stop the extent and volume of defeats.

They will have a checklist for coaches, starting with the improbable alpha coaches. Alastair Clarkson's decision to extent his contract until the end of 2022 makes it difficult for him to bail, even if the Blues offer half of Lygon Street. John Longmire, too, seems committed to Sydney.

Ross Lyon has only a year to run with Fremantle, but it is unclear whether the Blues have any interest in him, or he in them. Brad Scott, obviously, is a candidate.

Next down the list are the ex-senior coaches and the sexiest assistants. Could Brett Ratten return? Improbable. Michael Voss might get a look-in, but the most certain of future senior coaches, Sam Mitchell, is unlikely to pursue a senior job, on the grounds that he needs more experience.

Whatever Carlton does next, the next coach will inherit a playing list that is far better than 1-10 and will have a far better prospect of success than did Bolton, who was tantamount to an appointed administrator taking over a broken enterprise.

But Carlton has broken him.