Home » Rugby League » Why Eels aren’t weighed down by history, hysteria and ghosts of 1986

It was during one of Parramatta’s annual pilgrimages to Darwin, an opportunity for the club to bolster its fan base and bottom line, that current and former Eels players came together.

As several generations of Eels stars mingled during the pre-game dinner, put on for the sponsors who had made the trip to the Top End, Dylan Brown turned to the bloke sitting beside him.

“So, what was your name again?” Brown asked his dining companion.

“Brett,” came the rather terse reply.

Brett didn’t seem overly impressed. Those who witnessed the exchange were also agog.

“I was standing next to Dyl at the time and I’ve just gone, ‘Are you serious? He’s the best six to play for the club, and you’re wearing his jersey,’” Brown’s halves partner Mitchell Moses recalls.

Turns out that “Brett” was none other than Brett Kenny. Here was Parramatta’s current No.6, completely oblivious to the fact he was in the presence of the club’s greatest player in his position, and the last to steer it to glory, in 1986. 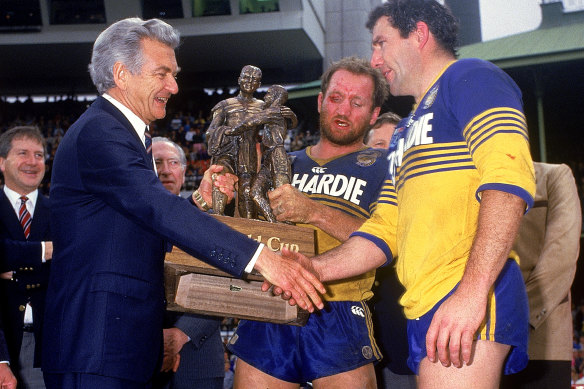 The Eels haven’t won a premiership since the late Bob Hawke was prime minister.Credit:Getty

At a time when the class of 2022 are said to be weighed down by the burden of history, that initial Brown-Kenny meeting suggests otherwise. While the endless comparisons to Peter Sterling have become tiresome for every subsequent Eels halfback – spare a thought for Moses during grand final week – not a single member of Brad Arthur’s team was born when Sterlo and Kenny completed their final lap of honour.

Which is why, while long-suffering fans keep delving back into the past for happy memories, the current team, which takes on the Panthers on Sunday in the NRL grand final, remains rooted in the present.

“I’ll focus on the now,” Brown says when reminded of the meeting. “I don’t know if they expect us to know every single player.

“I wasn’t a league supporter growing up; I don’t think I was born when he was playing.

“I met him at a function and didn’t know his name. I thought I’d ask him and he wasn’t too happy about it. But we’re mates now. We’re all good.”

Kenny doesn’t hold any grudges either.

“He knows now, it’s a bit of fun,” Kenny says. “I’m not dirty on him, it’s not his fault he came from New Zealand and played union; he wouldn’t have known much [about league].

“With all that’s going on in the media, that it’s been 36 years, they would know something about it now.” 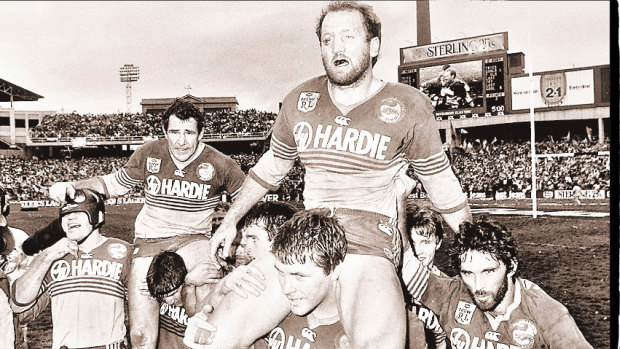 Ray Price and Mick Cronin are chaired off after winning the 1986 grand final.Credit:Fairfax

If the longest drought in the NRL is finally broken, there will be new memories to sustain the Parramatta faithful. Until that is the case, they will harken back to that blue and golden year that was 1986, when the Eels won not only the Winfield Cup but also the midweek Panasonic Cup.

They were the two biggest moments of Mick Delroy’s career, although his memories of both are hazy. The Parramatta three-quarter was knocked out in both games. The coathanger that Andrew Farrar put on Delroy in the decider would be a send-off offence in today’s game.

“I don’t remember getting knocked out,” Delroy says. “The way he did it, Andrew Farrar went in hard and took his chances. He flipped the coin, it came up and everything was all right.

“He apologised straight after the game when I saw him. I didn’t even know what he was talking about, to be honest with you. 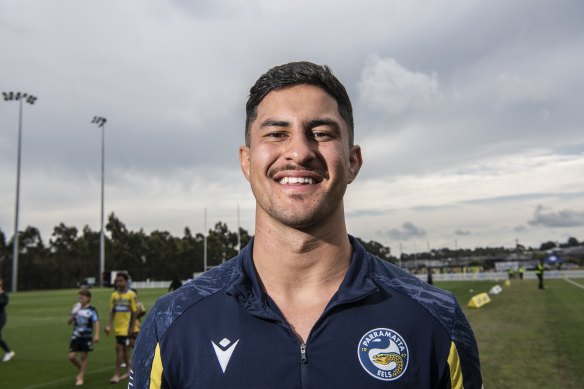 It almost didn’t happen. In the dying moments of the only tryless grand final in history, Canterbury were peppering the Parramatta line. In the final play of the game, Bulldogs hooker Mark Bugden makes one last, desperate lunge for glory. The man who made the try-saving tackle has gone onto become a trivia question.

“That famous last tackle,” chuckles Michael Moseley, the man who effected it. “I had a mate I worked with when I was at Tooheys and he put that question into trivia: who was the man who made the last tackle in the 1986 grand final?

“I still get asked about that.”

Moseley tackled himself to a standstill that day. Ringing in his ears was a pep talk that Alan Jones had delivered to the Eels a fortnight earlier. Jones, the former football coach and broadcaster, had told John Monie’s men not to look too far ahead; to break up each minute of the game.

“Just play every minute and then worry about the next minute when it comes,” Jones told them. “Just do what is in front of you.”

A photo of Moseley walking off the SCG after that 80th minute, his face a bloodied mess, was hung in the Parramatta Leagues Club under the caption: “The face of courage”. 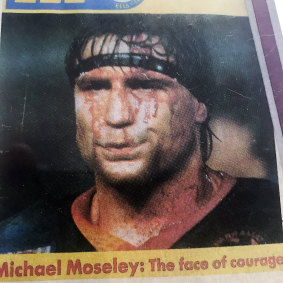 Eels hooker Michael Moseley on the cover of the Parramatta club magazine.

“They used to have it in the bistro,” Moseley recalls. “People would see all the blood pouring off my face and it would turn them off their food. Denis Fitzgerald [club supremo] ended up taking it down.”

Other images endure: of Ray Price and Mick Cronin being chaired off together, sent out winners in their final game. All the players boarded the team bus, headed for the leagues club to celebrate the achievement, save for Price. He made his own way home first, where he and his wife were picked up. The rest of the team then drove off to fetch their skipper.

“So you’ve got 25 guys on this ginormous school bus out the front of Pricey’s place out at Georges Hall,” Moseley recalls. “Only Pricey could do it, seriously. People think Denis ran the show, but Pricey did.”

The celebrations that night weren’t as raucous as the ones that greeted the team when they won their first title, in 1981. This would be their fourth premiership in six years and there was nothing to suggest the good times would end.

“I often think that Parramatta fans were getting blasé about it all,” Kenny says.

The good times ended, rather abruptly in fact. Every “next Sterlo” has never been as good as the original, Emperor Fitzgerald’s empire crumbled and the ensuing decades have been marred by factionalism and underperformance. 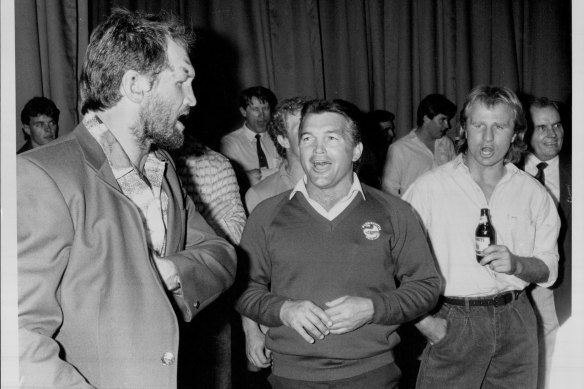 Only now, under Brad Arthur and an administration that has its affairs in order, do the Eels get the chance to resign the past to the past.

“I always felt sorry they have had to carry a burden or millstone around their neck,” Sterling says. “It’s not self-imposed; it’s something that comes with the beast.

“As Ray Price so eloquently puts it, the only way to get rid of it is to win it.”

The players of the 1980s still catch up often. Those involved in winning grand finals are part of “The 30 club”, signifying the small number of men to do so. On Sunday, there is a chance for 17 additional members to be inducted. History can be made if they aren’t burdened by it.

“They have taken a good approach to it,” Monie says. “What’s happened in the past isn’t going to help them win this year.”

Even the man in the opposition coach’s box on that storied day in 1986, then-Bulldogs mentor Warren Ryan, wants to see the blue and golds back on top.

“I’m actually hoping that Parramatta will win,” Ryan says. “You have to acknowledge that as an easing of the tensions.”

Watch the NRL grand final exclusive, live and free on Channel 9 and 9Now.