After a "pretty devastating" shoulder injury ruled Corban McGregor out of the 2018 NRL Women's competition, the Roosters flyer is keen to make up for lost time.

"It's just that little bit different for me, a bit more special," she said of her upcoming debut with the club against the Broncos at AAMI Park on Saturday. 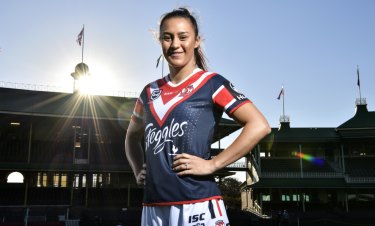 Corban McGregor is primed to finally make her debut for the Roosters in the NRLW Premiership.Credit:NRL Photos

The Roosters were runners-up in 2018, losing their first two games before sneaking into the grand final in the last round.

"I think we learned a lot from last year – we're really confident in the girls we have and the team that we've got," she said.

"We've really bought into what our team plan is – we just want to play simple footy and do it really well."

McGregor conceded that the team didn't find their feet until a 26-0 win over the Dragons, which saw them reach the grand final on for and against.

There's no room for a sluggish start this time around.

"We need to be ready for that first game – we're not trying to play catch up in those first couple of rounds because there's no time for it," she said.

"That's the nature of this competition. It's short, sharp and you've got to be ready otherwise you'll be left behind."

The NSW and Australian rep said that the quality of the league is already better than last year and that the growth was sustainable for years to come.

"I thought this year would improve but I didn't know to what length – it's just going to get bigger and better, I think we'll be surprised every year from now on."

Echoing the sentiments of Dragons' star Brittany Breayley, McGregor is hoping for a truly national women's game in a decade's time.

"I'd love in 10 years' time if there was a full competition and girls can be professional footballers and make a living out of it.

"I don't know if it will happen in my career, but I think it'll get there."

The position of role model sits comfortably with the 25-year-old, one of the breakout stars of the women's game in the past couple of years.

"It's a bit surreal – people say that all the time and you still pinch yourself. It's a good feeling that girls can say they have female heroes and idols rather than looking up to the boys," she said.

"There's a lot of women that have played before me that have allowed us to get to where we are today. But to be on the pedestal that women's footy is on at the moment, it's a big job and we've got to make sure that we carry it well and keep pushing boundaries."

Round one will see the Roosters and Broncos travel to Melbourne in a grand final rematch this Saturday, then the Warriors and Dragons square off in Sydney on Sunday.

The Chooks' target is straightforward – a premiership.

"We don't train to lose. Last year I was on the sideline but I feel like the squad felt like they didn't show what the Roosters are all about," McGregor said.

"If we do show our best footy, then we will win this thing."