Home » Rugby League » Wayne does it again as Souths march on

In fact, take a bow every player who was wearing the famous South Sydney red and green on a memorable Saturday night in Townsville. 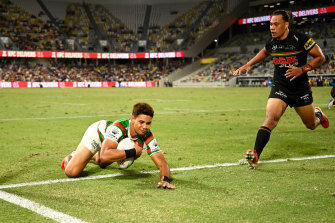 The wily old supercoach and his side are 80 minutes away from another grand final after a gutsy 16-10 win over Penrith.

The fairytale farewell from Redfern for 71-year-old Bennett might just happen yet.

The win means Souths advance straight to week three of the finals – but more importantly dodge heavyweights Melbourne until grand final day. They tackled their hearts out as Penrith did their best to nab an equaliser.

The second half must have felt like an eternity for Souths fans watching at home.

Taaffe, in just his sixth NRL game, was excellent in the big moments. Apart from a dropped Nathan Cleary bomb midway through the first half, then a dodgy kick that gifted Penrith a seven-tackle set in the second half, he was flawless.

The suspended Latrell Mitchell’s No. 1 jersey is in good hands.

Bennett said afterwards: “I think he [Taaffe] did a tremendous job. We wouldn’t have put him out there if we didn’t believe in him. We believed in him.”

Reynolds was his typical classy self and is another popular figure who will follow Bennett out the door in a few weeks.

The skipper kept his cool while his own towering bombs caused plenty of headaches for the Panthers. Diehard fans will be hoping Brisbane-bound Reynolds bows out with another premiership ring, more so than the super coach.

Burgess was enormous off the bench and ran for nearly 200m. It was an inspirational stint by the big Englishman.

The competition has been tipped on its head – and Bennett would be loving every moment of it. Could he be ready to win his eighth premiership?

He kept Penrith guessing all week about Taaffe and whether he would actually start at fullback.

Then he returned serve at Penrith counterpart Ivan Cleary, who accused Souths of trying to take out his son and halfback Nathan Cleary.

Bennett said Penrith had fallen into the shocking habit of having blockers protect Cleary whenever he kicked.

Bennett was not fussed about the pre-match verbal sparring with Cleary and said he was happy to keep quiet until “he [Cleary] was the one who came out and started mouthing off”.

Cleary said he regretted kick-starting the public stoush with Bennett and Souths, and while he stood by his comments, said “the NRL needs to make a decision on whether they’re going to let coaches deliberately manipulate referees and try to influence them”.

“Coaches do it because they can. you get fined after [games], but before games, it’s pretty much open slather,” Cleary said.

It was unreal September theatre. How good would it be if these two duked it out in another three weeks?

For Penrith, this will hurt for a long time. They must dust themselves off and get ready for the winner of Parramatta and Newcastle.

They are a bloody good side that can bounce back. A piece of the Panthers’ soul will be broken given they threw plenty at Souths and came away with nothing.

They scored just one try, something they did just once during the regular season when a second-string side took on the Wests Tigers at Leichhardt Oval.

The loss of fullback Dylan Edwards a day before the game hurt. Stephen Crichton did an excellent job moving back to fullback, but his replacement winger Charlie Staines was under-done and underwhelming in his first finals game.

To make matters worse for Penrith, co-captain Isaah Yeo was placed on report for a crusher tackle.

Penrith levelled the scores right on half-time with a Cleary penalty goal.

The Panthers spread the ball left as the siren sounded, Viliame Kikau somehow squeezed the ball out for Jarome Luai who sent Matt Burton down field.

Burton threw a wild pass back infield and Jai Arrow was pinged for touching the ball in an offside position.

A Cleary banana kick meant for the upright bent back into the in-goal and was kept in play by Paul Momirovski before Crichton scored the opener.

Crichton and Momirovski had only moments earlier combined to deny Souths and Cody Walker a four-pointer at the other end of the field.

Just when Penrith looked like they were getting on top of their rivals, Damien Cook came up with a rare one-on-one strip on James Fisher-Harris.

And when Crichton spilled a Reynolds bomb a couple of minutes later, Souths were right back in the game with an even share of possession.