Chad Townsend has officially announced he will walk out on the Sharks to take up a three-year deal at the Cowboys.

Cronulla’s only premiership-winning halfback has declined an offer in his favour to stay at the club next year, telling teammates on Wednesday morning he will head to North Queensland. 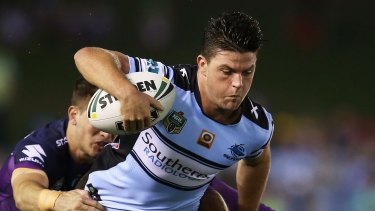 Chad Townsend will join the Cowboys in 2022.Credit:Brendon Thorne

Townsend, who was close to sacked Sharks coach John Morris, was one of a host of off-contract players at Cronulla. His defection is set to spark a halves merry-go-round in the NRL with Adam Reynolds, Mitchell Moses, Corey Norman, Tom Dearden and Anthony Milford all without deals for 2022.

“Chad has been a great servant of our club, shown great character throughout his career and has assured me and everyone at the Sharks he is committed to getting the job done and making the 2021 season a successful one,” Sharks chief executive Dino Mezzatesta said.

“He has put family first with his decision to take up this opportunity, which we fully appreciate and understand, and we wish him well with his future both as an NRL player and beyond.”

It will provide the first big recruitment test for incoming coach Craig Fitzgibbon, who still has decisions to make on the futures of Shaun Johnson and Matt Moylan.

Townsend is due to address the media later on Wednesday.