Home » Think Penrith is doing well in the NRL? Check out the rest of the club

Ivan Cleary has been hailed as the main man behind a decade-long Penrith revolution that led to the club having a near-perfect start to the 2021 season, across all three grades.

It is well documented Cleary’s NRL side are chasing their ninth straight win on Friday evening when they host Cronulla, coming after the 2020 season where the Panthers won 17 straight games before a grand final defeat. 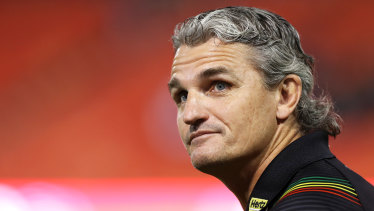 Ivan Cleary has been hailed as the man responsible for the success in all three grades at Penrith.Credit:Getty

“All these results we’re now having basically reflect the hard work that has been put in by a lot of people over a long period of time,” Panthers football manager Matt Cameron told the Herald.

“But Ivan Cleary has been such an integral part of this whole process. It all started when he got here in 2012 and joined Gus.

“People don’t realise how long it has taken for us to get to this point. It’s not like you can package it all up, give the blueprint to another NRL club, then expect the same results in 12 months.

“It’s all about alignment, from pathways programs through to the school programs to first grade, how the coaches coach, the relationship between the football club and leagues club … everybody knows their job and what the expectations are.” 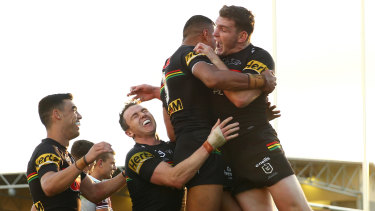 Given the fantastic depth and success of Penrith, the NRL could well have given thought to introducing a second team at the foot of the Blue Mountains, and not in Brisbane.

Cameron laughed off the suggestion and said: “We know geographically we’re blessed, we have 24 clubs and 8500 juniors. But you also need to be able to find the diamonds in the rough and polish them up, which is something we’ve become good at. When our players get to first grade, we know they’ll be ready.”

Cameron added another key component in the success was the level of corporate governance by “[CEO] Brian Fletcher, [chairman] Dave O’Neill and the board”.

Fletcher was full of praise for Cleary and said: “He’s had such a big role in this rebuild, and the best part about Ivan is he’s collaborative – he wants everybody included and doesn’t exclude anyone.”

The Panthers famously won 17 straight games last season before they lost the Grand Final to Melbourne. Penrith are chasing a 9-0 start against the Sharks.

One player desperate to improve on last week is back-rower Viliame Kikau who struggled to get into the game against Manly, and knows he needs to demand the ball more from his five-eighth Jarome Luai.

“I wasn’t getting the ball in my hand as early as I’m used to last week, and one thing I’m working on this week is improving my talk with ‘Romy’ [Luai]. I need to be dominant with my talk because it only makes his job easier and he knows when to give me the ball.

“I do get too relaxed sometimes. I don’t even realise how relaxed I am until after the game and I’ll see my stats and be like, ‘how did that happen?’. One of the things I actually wanted to work on this year was being consistent.”