When Brad Fittler and the rest of the NSW side emerge from their self-induced coma, they could do worse than watch a replay of the devastating loss to Queensland and focus on two moments.

Those moments perfectly capture what the Blues lacked in the 20-14 defeat at Suncorp Stadium on Wednesday night. 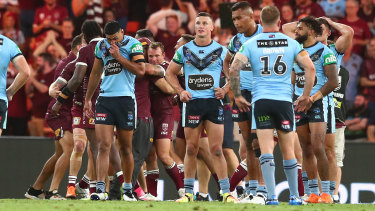 This is about as aggressive as the Blues got in their game-three loss to Queensland.Credit:Getty

The actions of Maroons replacement forward Jai Arrow were not an accident.

The South Sydney-bound prop shoved the head of the clearly concussed Tedesco into the ground, before picking him up and shaking him, and tossing him to the ground once more.

We’ve seen this movie before. In game three of the 2009 series, NSW prop Brett White knocked out Queensland veteran Steve Price before teammate Justin Poore inexplicably picked up Price and dumped him into the turf.

The Maroons players, especially the forwards, turned various shades of red, running in from all directions in support of their guy. The crowd was so incensed that players on the field that night say they were certain a pitch invasion was imminent.

When the all-in brawl finally simmered, the Queenslanders briefly conferred. Then, from the restart, they launched the ball high into the air, pummelling poor old Blues fullback Kurt Gidley just as he caught it.

Then it was on again.

Arrow didn’t even cop a dirty look from the Blues forwards after his deplorable actions with Tedesco.

Yes, play had continued down field but that didn’t matter. This is Origin. This is your teammate. This is your captain. And this was one of the grubbiest acts seen in a long time.

The forwards should’ve been up in Arrow’s grill straight away. Alas, they were nowhere to be seen.

Cleary was accidentally caught up in the ruck as Munster tried to reel off a quick play-the-ball. Frustrated, Munster shoved a hand in Cleary's youthful face as he lay on the ground.

Referee Gerard Sutton — we’ll get to him in a minute — should’ve blown a penalty to the Blues. Instead, he gave one to the Maroons as Munster went on with it. Then Corey Allan, standing at dummy-half, stood over the top of Cleary and had a go, too.

Meanwhile, as the Maroons players walked over the top of Cleary like he was a piece of paper, not a single Blues forward thought now might be the time to leap to the defence of their little halfback.

Finally, Jack Wighton came flying in from centre to help his isolated playmaker.

But ask yourself this: would the Queensland pack have allowed these two incidents to pass with impunity? Would they have stood back and played to Sutton’s whistle?

And would young firebrand Tino Fa'asuamaleaui, who went toe-to-toe with NSW prop Payne Haas in game two in Sydney, stand for such malarkey?

His eyes would’ve rolled back into his head like a great white shark about to lunch on an unsuspecting baby seal.

It was telling when Fa'asuamaleaui declared in the lead-up to the decider that he wasn’t going to curb his aggression while Haas disturbingly went into his shell.

“I'm not there to show how big my balls are,” the 120kg Haas told reporters.

The relative timidness of the NSW forwards in the decider is something Fittler might want to consider when selecting next year’s team.

He controversially overlooked Knights enforcer David Klemmer this year, which in hindsight may have been a mistake.

The reason given publicly for Klemmer’s omission was that he’d endured a long season and needed a break.

In truth, the Blues coaching staff weren’t happy with his downtrodden attitude in camp before game three last year when he was recalled for the suspended Tariq Sims.

Since his appointment as coach three years ago, Fittler has adopted a policy of picking good players and even better men.

That philosophy was introduced because of the disconnect between the Blues, some of whom were rightly branded “selfish”, and the state they represent.

Perhaps this series loss will force a change of thinking.

The Blues forwards were superb in game two, playing fast through the middle with Damien Cook and Tedesco revelling off the momentum gained. 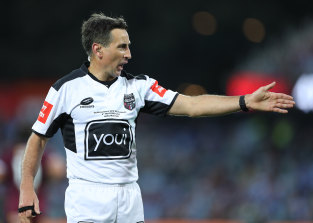 Referee Gerard Sutton lets the Maroons get away with murder in the decider.Credit:Getty

But they were shown up in the decider before a hostile Queensland crowd, with the Maroons’ aggressive forwards standing metres offside, playing dirty, pounding the Blues into submission.

NSW have privately complained all series about Sutton letting the Maroons jump off their line early.

Indeed, the NRL might need to reconsider if Sutton is still the game’s best whistleblower because he was grossly inconsistent with his 10 metres, his penalties and especially six-to-go calls.

But instead of the Blues simply copping the streaky decisions, and letting the Maroons dominate them, the best course of action would’ve been to fight fire with fire.

Stand offside. Step across the line. See a head? Whack it.

A bit more, er, grit. For the love of Jesus H Bennett, it’s Origin after all.

Speaking of the Supercoach, how unbearable is Wayne Bennett going to be for the next year after his Queensland side won the unwinnable Origin series?

Answer: quite a lot. Love it.

Now the Queensland Rugby League needs to do its part by bending its rules to allow him to coach next year despite juggling South Sydney commitments.

South Sydney, you’d hope, will also oblige in his final season before the very capable Jason Demetriou takes over in 2022.

Asked if he would coach the Maroons next year, Bennett curiously replied: “I’m not going down that path now. I’m not in a good place emotionally.”

For us mere hacks, Bennett is great copy.

He's the master of saying very little, but his well-timed sound bites helped keep this series bubbling along.

“Crack gags and give it to people”.

Of all the great advice the Herald’s former chief rugby writer Greg Growden ever gave me, this was the most invaluable.

It showed me the importance of being fearless, of never being spun lies, of holding people to account, but mostly that sports journalism is about having fun.

A beer always tasted better with Growdy, especially when he was cracking gags and giving it to you.

He didn’t so much write columns as hit people between the eyes with them. In April last year, I received a text message from him.

“Am going to devote Ruck and Maul to Folau today,” he said. “Off the long run. Enough is enough.”

Off the long run? Try the back fence.

He’d penned a very personal column about his mental health battles and how, during his time in a treatment centre, he met several gay and transgender men who had been made outcasts of society simply because of who they are.

It was so perfect; an incredibly brave and important column that exposed with brutal honesty why Israel Folau’s homophobic social media posts couldn't be tolerated by Rugby Australia. I thanked him then and I wish I could buy him one last beer to thank him now.

Growdy passed away on Saturday evening after a three-year battle with cancer and was farewelled at a service in Sydney on Thursday morning.

Rest easy up there, big fella. Thank you. In other news, Tah Man also sends his regards.

THE QUOTE
“Lesson learned from Bryson this week guys. It’s not how long your shaft is but how you use it.” — Social media influencer Paige Spiranac on Bryson DeChambeau using a 48-inch driver at the US Masters, in which he, er, flopped … I’m here all week.

THUMBS UP
Not only did Argentina spring the mother of all upsets in beating the All Blacks for the first time with passionate, hard-running, hard-hitting rugby, the result prompted New Zealand media to call for the head of New Zealand coach Ian Foster after back-to-back losses. Rah and rah.

THUMBS DOWN
The Shayna Jack episode should be a lesson for Australian swimmers to be careful when calling out doping, but the typical grandstanding from former ASADA boss Richard Ings — including a comparison with Donald Trump — after she had her ban halved to two years was cheap and nasty.

IT’S A BIG WEEKEND FOR …

Michael Cheika, the former Wallabies coach who is now on the coaching staff of the aforementioned Argentinian side. The two teams meet in Newcastle on Saturday night.

IT’S AN EVEN BIGGER WEEKEND FOR …

The NRL integrity unit now the off-season has officially started. School’s out for summer, as Alice Cooper so eloquently put it.