In the already fabled final quarter of his team’s one-point semi-final win over the Brisbane Lions, Bailey Smith’s most talked-about-moment wasn’t the stupendous, left-foot goal that gave the Dogs a six-point lead late in the final term.

It wasn’t an earlier final-quarter major that floated through and extended the Bulldogs’ lead beyond a goal, nor the improvised skidding foot pass that created a crucial goal for Josh Schache.

For the growing band of Brand Bailey followers, it wasn’t even the desperate shove forward to enable his old Xavier College teammate, Laitham Vandermeer, to score the match-winning behind.

Rather, the action that created most discussion – and mild controversy – was the celebration of that brilliant left-foot goal. Having converted, off maybe two steps, near the boundary on his left boot, Smith turned to face the crowd, flexed his left arm, showcasing those much-displayed biceps, and then pointed his left hand’s middle finger to his vein. 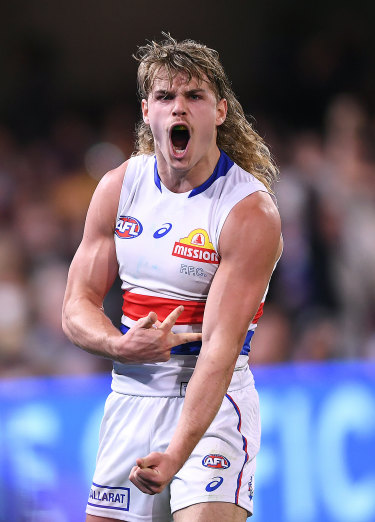 Ice-cool: Bailey Smith after his clutch goal against Brisbane.Credit:AAP

What was meant by this action? It wasn’t clear to many of the hundreds of thousands watching it on their screens. Some old-school talkback radio listeners questioned whether the gesture was appropriate.

The person who knew, as soon as he saw it, what Smith’s injection motion signified was in the United States. D’Angelo Russell, NBA all-star and Minnesota Timberwolf, understood that Bailey’s injection gesture translated to “ice in the veins” – as in, he’s been cool and calm in a clutch moment. He knew it because Russell himself was the author of this celebration.

Post-match on the field, Smith told Channel Seven that he was imitating Russell, who would share the Bailey-ice-in-the-veins image with his 3.5 million Instagram followers. Smith later said there was a second meaning, saying on his Instagram account: “Get vaxxed cousin.″⁣ 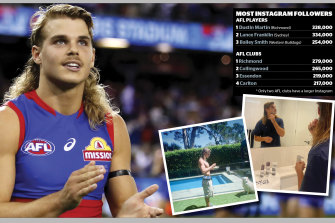 It’s fitting that Bailey Smith would be the player who would borrow from an NBA star’s playbook, for Smith is the footballer who most encapsulates a trend in not simply footy culture, but among younger followers of sport and entertainment.

By the metrics of social media, he’s the most marketable player of the dozens – including Patrick Dangerfield and Nic Naitanui – from the influential Connors Sports management stable. As of Friday, Smith had 254,000 Instagram followers and the numbers keep climbing. Only Dusty Martin (338,000) and Lance “Buddy” Franklin (334,000) have more than Smith, a 20-year-old in his third season, whose major achievements lie ahead of him.

More tellingly, only two clubs – Richmond and Collingwood – have Instagram followings that exceed that of Smith, who personifies what you might call the influencer culture, especially among the young.

In this culture, which follows the NBA, American sport generally and European soccer, the individual is followed and is a brand separate from the team.

In this smaller-scale AFL version, there’s Dusty, Buddy and Bailey – brands apart. They’re more watched, liked and shared than their clubs. We say the club is always bigger than the individual. Except on Instagram, where Smith goes by the handle “bazlenka,” alongside his sponsor Monster Energy.

‘To a large extent Bailey’s popularity is organic and just a reflection of his unique personality and comfort in being himself.’

Not that Smith is anything but team-first at the Bulldogs, where he probably ranks in the same slot within their midfield – third – that he does in the AFL’s Instagram tallies, behind champion skipper Marcus Bontempelli and his ultra-consistent lieutenant Jack Macrae.

“Bailey is representative of the new guard who consciously and subconsciously draw inspiration from athletes in the US and Europe,” said Bulldogs chief executive Ameet Bains, who lives near Smith and knows him well.

Bains says Smith’s flair and confidence derives from his “insatiable work ethic and him being professional and diligent in all he does”.

Indeed, as a draftee, Smith was viewed by recruiters as almost too professional, wound up to the point that he was anxious, a non-drinker who weighed his food. Smith has gone public, too, as a sufferer of anxiety.

Non-Victorian clubs worried that he would head home, with the upshot that he was picked at No.7, in a super draft, behind Sam Walsh, Jack Lukosius, Izak Rankine, the King brothers and Connor Rozee. Among the mids, he’d rank behind only Walsh today.

Smith seemingly contains contradictions: a player who lives with anxiety, yet has “ice in the veins” in pressure moments. A reserved, humble youngster, yet one who is comfortable with creating his own brand and having hordes of followers.

He typifies those of his generation – many at least – in that if something isn’t captured on social media, it hasn’t happened.

While football has forever had individuals whose following transcended club allegiance – John Coleman was adored by far more than Essendon fans, Wayne Carey, the Roo boy, was bigger than the club in many ways – social media has forged a new pathway: athlete as his own brand manager.

But did Smith create Brand Bailey or did it just happen, in the same way that any event can go viral?

“To a large extent Bailey’s popularity is organic and just a reflection of his unique personality and comfort in being himself,” said Bains, who says the club encourages players (and staff) to be themselves. “Bailey is no exception.″⁣

Smith, clearly, is especially popular with young women and girls. He’s not averse to putting up topless shots, showing what his generation call his “shredded rig”. It’s evident that a footballer can be reserved in one mode of communication, and not another.

Bains calls him a “very kind, well-mannered and humble person, who’s very giving of his time to others”.

“He’s aware of his popularity, and his prominence but by and large he handles that well, despite his tender age,” he said.

Smith handles the different spheres of football as expertly as he did that footy that he slotted in the forward pocket last Saturday – including his Insta handle.