This is the vision that shows NSW fullback James Tedesco played the ball before referee Gerard Sutton blew the full-time whistle that denied a sequence which could have led to a last second victory for the Blues in the State of Origin series opener.

The Herald has obtained Channel Nine's wide angle camera shot of Wednesday night's thrilling finish at the Adelaide Oval, highlighting a three-on-one overlap – which wasn't shown during the broadcast – that was thwarted by Sutton's whistle. 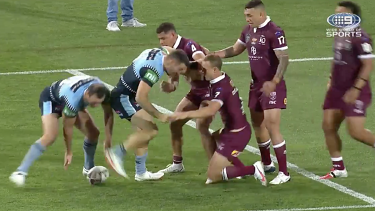 This is the moment referee Gerard Sutton blew full time. James Tedesco’s play-the-ball had already cleared the ruck when the whistle sounded.Credit:Nine

The Blues would have had a three-on-one, or even a seven-on-three overlap, had the ball swung out wide because four Maroons defenders piled on top of Tedesco to slow the ruck to deny NSW a chance for one last crack. Angus Crichton, Clint Gutherson and Josh Addo-Carr only had debutant Phillip Sami in front of them.

The Blues were unfortunate not to receive a penalty for the Maroons deliberately slowing down the ruck and could have played the last sequence of the game against 11 men given Felise Kaufusi had only just been sent to the sin bin moments before for an identical infringement.

The NSW Rugby League wrote to the NRL asking for an explanation of the controversial finish to Wednesday night's State of Origin series opener in which referee Sutton was accused of prematurely blowing full-time. 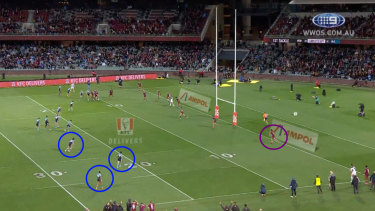 The overlap NSW could have exploited in the dying seconds of Origin one if referee Gerard Sutton allowed the last play to continue.Credit:Nine

Had the split-second decision gone the other way, the Blues had set up to the right and looked all but certain to exploit a three on one overlap that saw just one Queensland player to the left of the uprights covering 30 metres of territory.

Annesley responded to the Blues and outlined the protocols that the match officials all undertake for the conclusion of games.

"The way time is kept in all games for several years now is the time keeper has a direct audio link to the reeferee's ear-piece," Annesley said.

"With 10 seconds to go the timekeeper gives the referee a 10 second warning. At five seconds another warning then verbally counts down until full time. The whistle from Sutton wasn't blown prior to the timekeeper audibly saying to him full time."

Kaufusi and the Maroons were lucky to escape sanction after Kaufusi failed to immediately leave the field following his sin-binning with 13 seconds left in the match.

His slow exit, which only required him to walk about five metres to the sideline, provided Queensland with valuable extra seconds to rest before defending their line. The touch judge was forced to intervene before Kaufusi left the field of play.