Carlton sit on the bottom of the ladder and with just a single win this season, fans are restless and fingers are being pointed.

And that's before one Reddit user made what would be an unwelcome comparison for the Blues this week. 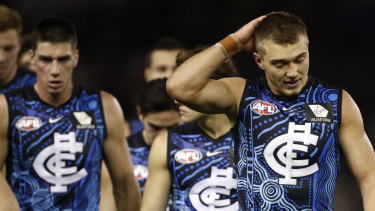 The Blues leave the field after their most recent loss, to St Kilda.Credit:AAP

Across the last seven seasons, Carlton have posted just 38 wins – the same amount that the now-folded Fitzroy tallied in their final seven seasons.

Admittedly Carlton have plenty of time to win more games this season and surpass the 38-game mark.

But if they don't lift their game, the Blues could easily match Fitzroy's benchmark of three wooden spoons in the seven-year period. Carlton currently have two across the last six years.

"Time to merge them with Gold Coast," one Reddit user posted. Another suggested the name Blue Suns for the hypothetical team.

Some blame Carlton's performance on past sanctions from the AFL. Others blame poor drafting and poor coaching.

But regardless of what's gone wrong, there is one key difference between the demise of Fitzroy and the current Blues – Fitzroy went broke.

The club, created in 1883, started to struggle in the late 1970s. By July 1980, Fitzroy was announced as effectively bankrupt.

In 1989, after a number of proposals to merge, Fitzroy gave in to a conditional marriage with Footscray in a "last resort" effort to save the club. The Bulldogs signed, but merger was dismantled by the Save The Bulldogs campaign, where it was reported that players and staff raised between $1.3 and 1.7 million to split up the clubs. 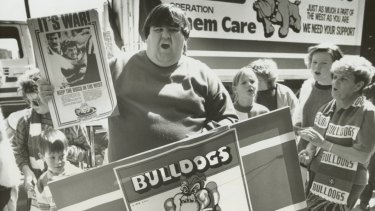 Footscray supporters protesting over the proposed merger with Fitzroy in 1989.Credit:Neil Newitt

The merger was abandoned in 1990 and to add salt to the wound, Fitzroy lost their sponsors in the aftermath of the divorce.

Over the next six years, Fitzroy experimented by playing in Tasmania, then Canberra. Fitzroy staff and players allege the AFL provided no financial assistance and ultimately in 1996, an insurance company called it in. In late 1996, Fitzroy merged with the Brisbane Bears

Longtime Fitzroy fan and former sport journalist Paul Gough puts the demise of Fitzroy down to scheduling, a lack of AFL support, and no access to priority draft picks. He said the fact Carlton's recent performance mirrors that of Fitroy's is an "absolute indictment" on Carlton, a club that "has everything, money, power, players".

The Blues are in a starkly different financial position, despite the similar win records. Six months ago, the club declared a net operating profit of $2,611,638 before depreciation and amortisation. 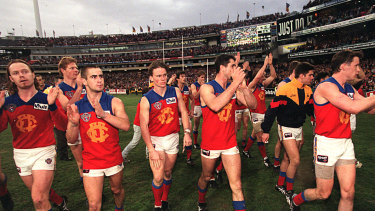 Fitzroy leave the field after their last game in Melbourne.Credit:Jason South

This was an improved financial result for the fourth consecutive year. It's also the second year in a row the club has generated a net profit.

The clubs have a starkly different set of problems, but freakishly similar results. But one Reddit user fails to find humour in the comparison.

"It’s not funny. It’s not good. It’s a football club on its knees and nobody wants that for any club."