Recalled Eels star Nathan Brown has hit out at speculation his hiatus from the NRL team is a result of a fall-out with coach Brad Arthur and other key figures within the team.

As first reported by the Herald on Monday, Brown earned a shock recall to Parramatta’s NRL side for Sunday’s grand final showdown against the Panthers despite having not played in the top grade since July 9.

Speaking for the first time since his controversial axing 12 weeks ago, Brown insists he has no issues with the coach despite his omission, which coincided with the former NSW Origin forward being told he is free to find a new club.

“That rumour is just a false rumour,” Brown told the Herald and The Age regarding rumoured tension with the coach.

“We’re on talking terms. All that stuff that has been said about us is rubbish. We’re all good and on talking terms. We both know we have a job to do come this Sunday. I hear some things being said, but I try not to listen to all that media talk.

“In the back of your mind, you’re worried that other people might believe the rumours. I don’t think they did though, to be honest. Everyone knows I wouldn’t be like that. They know that I will do what’s best for the team and the club.” 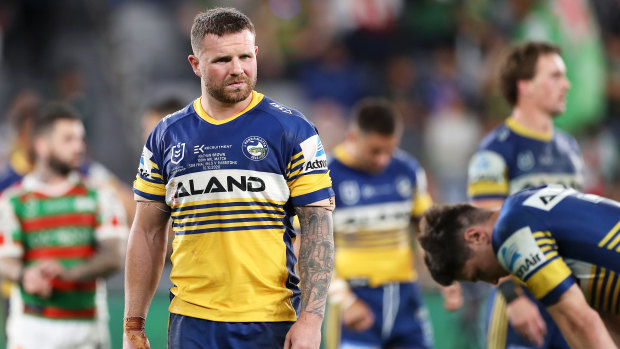 Nathan Brown is back in the NRL team.Credit:Getty

While Brown has not played in the NRL since round 17, a hand injury during that time cruelled his chances of an earlier recall.

Arthur indicated to Brown following Friday night’s preliminary final victory against the Cowboys that he was going to be considered for selection in the grand final.

It wasn’t until Sunday that he was officially told that he would play as Arthur opted for his aggression over the finesse of Bryce Cartwright on the bench. Despite being on the outer, his passion for the club has not dimmed.

“It’s probably the most difficult period throughout my career so far,” Brown said of the last three months. “It has been difficult, I’m not going to lie.

“I’ve been at the club now for six years. I’ve been through it all in those six years. I still enjoy the place. I grew up around here, so Parramatta will always feel like home. It hasn’t really changed despite what’s been going on.

“Throughout this whole process I was just saying to myself that I can only control what I can control, and that’s turning up to training everyday with a professional attitude and train hard. All the other stuff I can’t control.”

Sunday's decider could be Brown's last game in the blue and gold. His manager Mario Tartak has been given permission by the Eels to speak to rival clubs. Brown is on a deal worth around $500,000 next season.

The Eels are willing to fork out part of his salary if he can land a deal at a rival club, with the Wests Tigers showing interest in his services. But for now, Brown has a single focus.

“I try to play every game like it’s my last no matter the circumstances,” Brown said.

“I’m still contracted to Parramatta for next year but I know footy is a business these days. Everything happens for a reason. No matter where I end up I will give it my all, just like I will on Sunday. I can’t wait.”

Watch the NRL Grand Final Exclusive Live and Free on Channel 9 and 9Now.