The Panthers survived an enormous scare against South Sydney to win 20-16 and book a spot in next Sunday's grand final against the Storm. 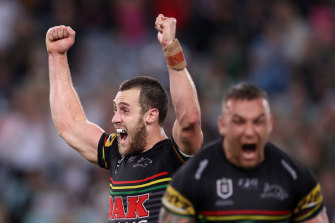 Souths did a remarkable job to stay in the ANZ Stadium contest as long as they did. Penrith looked like blowing the game apart on several occasions but could not.

When Corey Allan kicked ahead a Cody Walker cutout pass to score and get the Bunnies within four points, a Wayne Bennett miracle looked on the cards. The 30,116 fans at the ground were treated to an all-Sydney blockbuster.

But the Panthers made it 17 straight wins to set up a deserved one-versus-two decider.

Smith was into his second season in the NRL when Penrith last won the competition in 2003.

Like all Millennials, the young Penrith players will have little appreciation for history nor show any respect for the game's eldest statesman.

Sydneysiders will hopefully get behind the mountain men.

Penrith, however, will have a few concerns on Sunday when the match review committee hand down their charges.

James Fisher-Harris was placed on report for a high shot while Zane Tetevano caught former Panther Jed Cartwright high early in the second half.

Both players are experienced and their aggression in the middle will be needed against Melbourne's intimidating pack.

Fisher-Harris hit Junior Tatola high, but the commentators on Channel Nine thought it was harsh.

"I think he gets the ball and I don't know if he hits his head,'' said Phil Gould. "It's not my Penrith bias talking, but it's extraordinary he's on report … how ridiculous.''

Tetevano's shot was probably worse but was only penalised.

Cleary set up a couple of Panthers tries and his kicking game was again brilliant.

Wingers Brian To'o and Josh Mansour made plenty of metres. Isaah Yeo was outstanding and set up the final try for Dylan Edwards. Tyrone May was promoted to the starting side at the expense of Brent Naden – Naden never took the field – and he made a point of getting to the end of every Cleary kick.

The Panthers will need to be \much better against Melbourne. Their right-edge was exposed badly in the second half.

At least they welcome the return of suspended wrecking ball Viliame Kikau.

Penrith led 14-6 at half-time but it felt like they sholuld have been in front by so much more.

A Mansour pass sailed forward to Kurt Capewell who was in open space, and Cleary's final cutout pass to To'o sailed over the touchline on another occasion.

Even in the second half, Stephen Crichton was tackled with the ball when over the try line and knocked on just centimetres from the line on another occasion.

Souths were busted and clearly struggling physically from having to play the week before, but they refused to give up.

When Dane Gagai reached out to score, it was a two-point ball-game for the final half hour.

They pushed Penrith all the way. Maybe it was exactly what the Panthers needed.

No side in the modern era has won 18 matches in a row.

The headlines will be about Smith's future. Penrith's youngsters are the future.

Bennett's side bombed out in a second straight preliminary. It is the third straight year the Redfern club have stumbled a week out before the grand final.

Bennett will have just one more season to experience a bit of Glory Glory.

Souths were given a dream start when James Tamou was penalised for taking out the legs of Adam Reynolds after he had kicked. The skipper was unfortunate given he had tripped just beforehand, but referee Gerard Sutton made a point of telling Tamou ''it was still dangerous contact''.

Reynolds botched the gift penalty goal, but a couple of minutes later he kicked on the first tackle for an unmarked Alex Johnston to go ahead 4-0.

Soccer
Last in the West, Galaxy fire Schelotto as coach

Soccer
Jose Mourinho rips into Spurs flops after Antwerp defeat: 'My future choices will be easy'