Melbourne Storm won't be putting out any SOS calls for Billy Slater to return but they will leave Friday night's trial loss to New Zealand Warriors with plenty to work on.

The Storm went into the 12-6 loss at GMHBA Stadium in Geelong in front of 5853 supporters without at eight of their regular starters, including playmakers Cameron Munster and Cameron Smith. That pair's absence stood out the most, especially in an error-prone first half. 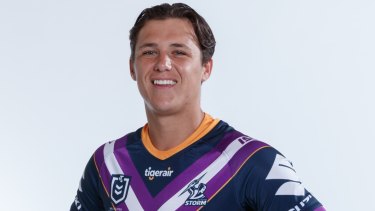 With Slater now retired, much of the focus during pre-season is on who will end up starting at fullback on opening night on March 14 and this game didn’t offer anything definitive.

Starting fullback Scott Drinkwater had some nervy moments early but was a spark in attack in the second half creating several breaks including the move down the right wing which saw Cheyse Blair score a try.

Drinkwater played three of the four 20-minute quarters and flyer Ryan Papenhuyzen took his place during the third quarter and spent some time in the outside backs also converting Blair’s try with a tidy sideline kick.

The Stormed rested the other contender for fullback in Jahrome Hughes as he played in the NRL All-Star game last weekend so he remains right in the frame with one remaining trial game against North Queensland in Mackay next Saturday.

Questions about Drinkwater's lack of size and his command of the defence remain after some fierce hits from the Warriors but Hughes and Papenhuyzen face similar queries and Drinkwater's ability to attack the line looks attractive.

Christian Welch captained the side in the absence of Smith while Jesse Bromwich, Will Chambers, Dale Finucane, Felise Kaufusi, Kenny Bromwich and Josh Addo-Carr joined Smith and Munster on the outer so the Storm side for round one should look much different.

Winger Sandor Earl played his first NRL game since 2013 and he showed some rust but was solid, catching a couple of high balls and fumbling one of them in about a hour on field.

"I'm probably not the only one rusty, at the end of the day we need to hold the ball and do our jobs then we should get across the line."

While there may not be a place in the side for him just yet, young playmaker Billy Walters also created some promising attacks from five-eighth and his outside fake pass and step created a break in the first half which should have resulted in a try but second-rower Tom Eisenhuth couldn't hold his pass and it bounced off his chest.

Storm assistant coach Jason Ryles was listed as the head coach but Craig Bellamy took charge at the "quarter time", reading his side the riot act for their errors and a defensive lapse on their left edge which saw the Warriors set up Neria Fomai for the opening try.

Ryles predicted during the week that Bellamy was unlikely to slip into the role of assistant coach and he proved correct, although Bellamy left him to take the half-time talk.

Drinkwater and triallist back Curtis Dansey-Smaller combined to break down the right wing and set up Blair for a try just after the hour but the Storm conceded almost right after as the Warriors gained quick metres then had Hayze Perham dart past two defenders and into a gap scoring the winner.