South Sydney hope to thrash out a deal with Cody Walker by the end of next week as the club handed Alex Johnston a new long-term deal they hope will give him every chance to break Ken Irvine’s long-standing first grade try-scoring record.

Johnston, who was almost squeezed out of the club last year in a move which prompted fans to start an online petition to keep him at Redfern, signed a three-year extension on Monday that will keep him at the Rabbitohs until the end of 2025. 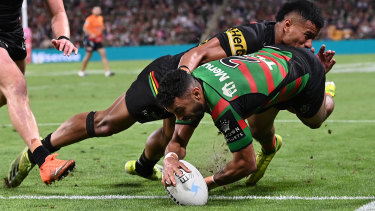 Alex Johnston goes over for a try in the grand final against the Panthers – his 30th of the 2021 season.Credit:Getty

Irvine scored 212 tries in a record that has stood for nearly 50 years. Johnston is on 136 career tries and would need an average 19 tries each year of his new contract to pass Irvine. He notched a whopping 30 tries this year, and 23 in 22 games in 2020.

South Sydney boss Blake Solly said Irvine’s record was discussed when they handed Johnston his latest contract. Solly also hoped Walker would follow suit and put pen to paper in the next week.

Recruit Anthony Milford will appear in Brisbane Magistrate’s Court on Wednesday to face three charges of assault relating to an incident last month, but the outcome of that hearing will have no direct impact on what Souths table Walker.

As for Johnston, Solly said: “Given Alex’s age and how many tries he scores each year, the record was a consideration. 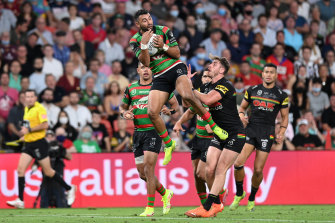 “We have an enormous respect for Ken’s record, he was a wonderful man and we wanted to give Alex every opportunity to have a crack at the record.

“If he can break the record in Rabbitohs colours we’d be enormously proud of him.

“We also have some bright young outside backs coming through, and ‘AJ’ has a lot of experience and is good on and off the field. He’ll set a good example for those youngsters.

“AJ has been very loyal to the club at different stages and in difficult situations. We also felt we had an obligation to repay that loyalty.”

Johnston has been on the end of some devastating backlines, and could yet line up outside Latrell Mitchell. New coach Jason Demetriou has already declared Mitchell will return from suspension in the No. 1 jersey, but the club also has Blake Taaffe, and Mitchell is a representative left centre.

Walker is seen as a prime target for Redcliffe given he spent a lot of time in the Queensland Cup, but Souths, who have lost their little general Adam Reynolds, know the importance of keeping their five-eighth beyond 2022.

Turning 32 next January, Walker would command around $800,000 a season, but could have seriously pushed for more had he helped Souths win the premiership earlier this month.

“We’re still talking about the terms of a contract with Cody and his management, but we want Cody at the club even after his on-field career has finished,” Solly said.

“Hopefully we can get something done this week or next. We always said we would wait until the season was finished, and we are working through a deal with Cody and his management now.” 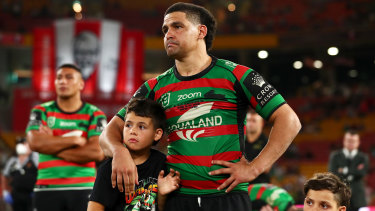 Souths and Cody Walker are in discussions about a new deal for their star playmaker.Credit:Getty

Elsewhere, there has been little movement on Josh Hodgson’s potential move from Canberra to the Wests Tigers who also distanced themselves from signing Penrith’s Api Koroisau for next year.

Koroisau’s management reached out to the Tigers late last week about 2023, not 2022, and there is not much of an appetite from some at the club.

The Tigers will not budge on what they are prepared to pay Hodgson, and are only interested in signing the Englishman for next year and possibly 2023.

There were also whispers Nick Cotric was potentially eyeing a return home to the nation’s capital, despite being on Parramatta’s radar while earning a decent pay packet from Canterbury.