The father of the Morris twins would love to see his boys reunite in the NRL and has declared: "Brett and Josh started together, it would be the perfect fairytale if they can finish together.

Cronulla coach John Morris this week torpedoed Josh’s dream of linking with the Sydney Roosters and his twin brother Brett, but the international centre and his management are refusing to give up on being at the Bondi club by round one. 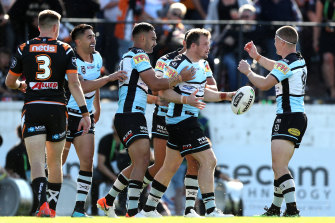 Which way to Bondi? Josh Morris is not giving up hope of moving to the Roosters.Credit:Getty Images AsiaPac

Steve 'Slippery' Morris, who played 180 games for St George before playing four seasons at the Roosters in the late 1980s, could not be prouder of his sons, and knows what it would mean if they could play alongside each other in what is likely to be their final season in the NRL.

While Morris came from an era when contracts were actually honoured, he also appreciated what a wonderful opportunity awaited Josh, 33, if he could chase his first NRL premiership with Brett on his outside.

Latrell Mitchell's exit and a season-ending knee injury to Billy Smith has left the premiers in desperate need of a left centre, Morris' preferred position. 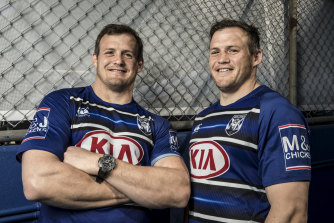 The Sharks, however, have already lost more than 1000 games of NRL experience after the retirement of Paul Gallen and departures of Matt Prior, Kurt Capewell, Sosaia Feki and Jayden Brailey.

Jesse Ramien and Bronson Xerri are tipped to get first crack at the centre spots, but the Shire club are loath to cut Morris loose any time soon because of the uncertainty surrounding Josh Dugan's fitness and concerns over Matt Moylan's dodgy hamstrings.

It emerged this week Morris was upset when the club signed Ramien. John Morris said no such complaints were relayed to him.

Josh is in Perth for the Nines and while he had originally hoped to keep the Roosters request on the quiet, he has since confided in those close to him he wants to make the move before the start of the season.

"I'd personally love to see them together again,'' Steve told the Herald.

"This will probably be their last year in the NRL, unless they go to England.

"They've had great careers, so it would be nice to see them back together one last time.

"I don't want to upset Cronulla fans, and they did well to get Josh over there after all the [cap] trouble at Canterbury.

"But Cronulla also have three or four centres already, and Josh is only keen to play centre from what I can gather.

"Brett has won two comps, but Josh hasn't won one yet, and that's probably the only thing he hasn't done in the game.

"They started together, and it would be the perfect fairytale if they can finish together and be with each other one last time.''

"But if Brett did play there, the Roosters then need a winger,'' Steve said.

"The Roosters are a good team, they have a good coach, but they desperately need a centre, and Josh would be the perfect fit.''

The Cronulla coach said this week Morris was too valuable to the club and could yet start the year in the No 1 jersey because of Moylan's hamstrings.

"What are we to do, let our most experienced guy walk out 32 days before the competition start? He'll be here in 2020,'' Morris said.

Brett missed the Sharks' memo and told Channel Nine before he departed for Europe with his Roosters teammates on Thursday evening: "Let him come over.

"I’m not saying that Josh is unhappy at the Sharks, but I think he’d fit in well at our club. And you know exactly what you’re going to get with Josh, he’s a quality player and a good human as well.''