Collingwood have left out four players from last week's heavy loss to West Coast, including regulars Jordan Roughead and Rupert Wills, and welcomed back Brayden Sier to the side to play Fremantle on Sunday.

Along with Sier, the Pies have selected Irishman Mark Keane for his debut, Jack Madgen, Travis Varcoe and Steele Sidebottom, who returns after his four-match suspension for breaching the AFL's return to play protocols.

Wills and Roughead have been omitted by the Pies, who have also left out Atu Bosenavulagi, Callum Brown (ankle) and Matt Scharenberg. 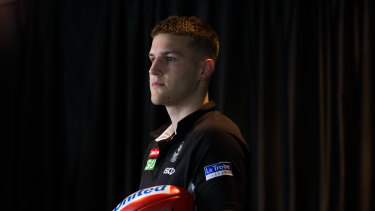 Brayden Sier will play his first game for 2020. Credit:Simon Schluter

The Pies were defensively mauled by the Eagles and Keane and Madgen are like-for-like swaps for Roughead and Scharenberg.

Wills has been keeping Sier out of the side, who has not played since round 18 last year. He was hugely impressive in 2018, debuting in round 15 and then playing every game up to the grand final loss.

The Pies clash with the Dockers will be their first of four within 14 days across three states.

The Gold Coast Suns go into their match with GWS unchanged, while the Giants have selected half-back Zac Williams in place of the injured Daniel Lloyd.

Cameron was fined $1000 for engaging in rough conduct against Marty Gleeson in the first quarter. The conduct was deemed careless, low impact and high contact.

Meanwhile Cutler, playing his former team for the first time, was fined $1000 for a rough conduct via a dangerous tackle. It was deemed careless, low impact and high contact.

The AFL said it would crackdown on dangerous tackles earlier this year when it changed the MRO protocols to make it easier to punish such an action.