This was close to a non-negotiable for St Kilda. Gifted some extra breathing space via Melbourne's implosion against Sydney, the Saints had to ensure they avoided making the same mistake against a similarly lowly opponent.

On that front, Brett Ratten's side did enough. St Kilda's destiny in 2020 remains in their own hands, but they will probably need to play better to beat West Coast and or Greater Western Sydney over the final two rounds. Wins in both those matches will end a nine-year finals drought, and even one more victory could still be enough. 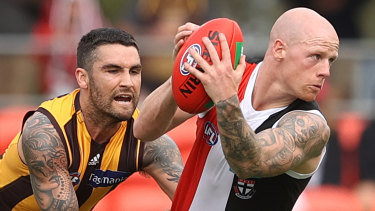 Sunday's match at Gold Coast's Metricon Stadium was a strange one. The Saints entered without the injured Tim Membrey and then confirmed the week-long rumours by leaving out fellow tall forward Max King, who had been due for a rest. The Saints essentially picked three ruckmen, with Ryan Abbott included alongside Rowan Marshall and Paddy Ryder. Tempting fate, perhaps? It looked a bit like it early when the Hawks – days after suffering the embarrassment of becoming the first team to lose to Adelaide this season – kicked the first three goals of the game.

St Kilda responded quickly though. Ultimately the Hawks edged the first term 5.1 to 4.4. It was exhilarating end-to-end football with tall targets on either side looking dangerous but the pressure was average and this wasn't sustainable.

As it turned out, almost half of the game's goals came in that opening stanza. The Saints tried to take the sting out of the game in the second term, playing a high possession chip and mark game. It was ugly but it took the air out of the Hawks. St Kilda kicked the only goal of the quarter and then took control of general play after half-time.

Alas, their old goalkicking affliction – one which Saints fans though they had seen the back of – returned. St Kilda dominated the third term but the Hawks hung in, responding against the run of play. It took Jack Billings to settle things on the three quarter time siren, bending one back from the pocket with a kick which threatened to bring down a light plane.

Hawthorn didn't relent and the margin was still inside a couple of goals with little over three minutes to play before former Geelong tall Abbott shut the gate. A miserable season for the Hawks continued as James Worpel, who had been outstanding early in the game, ended it nursing an injured shoulder following a heavy knock from Dean Kent.

Jonathon Marsh and Josh Battle were the Saints' main goalkicking culprits. Marshall sprayed a couple as well but also kicked two goals in a towering performance.

A couple of experienced Hawks let themselves down during the first term. Jack Gunston had a brain fade when he tapped the ball from Dan Butler's hands after the Saint marked just beyond the 50 metre arc. Butler goaled from the ensuing 50-metre penalty. Then Luke Breust, who appears to be in the midst of a battle with the yips, kicked into man on the mark Ryder as the Hawk lined up for a set shot after the quarter-time siren.

I GET KNOCKED DOWN

It's been a year of living dangerously, and it seems that even extends to camera operators. You had to be doing pretty well to hit someone in the sparsely populated stands at Metricon on Sunday but that's just what Hawk Tim O'Brien did with his set shot during the first term. The person behind the camera was knocked off balance but impressively stuck to the task. It wasn't the only unusual contact during the first term, with Hawthorn coach Alastair Clarkson giving a friendly pat to Ed Phillips after the Saint made a desperate contest on the wing, where Clarkson was coaching from ground level.

Soccer
Fernando Torres: ‘I felt like I could fly at Liverpool. I was always competing against that version of me’
WWE News