At a time when the attention of the sporting world is elsewhere, the ideals of “higher, faster, stronger” resonated in Brisbane more than a decade prior to the city’s chance to host the Games.

The NRL season is a marathon, and Manly missed the start. But against fickle opponents, who had the audacity to lead just before half-time, the Sea Eagles continued to make up lost ground. 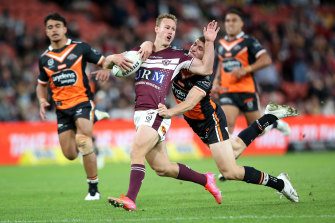 Daly Cherry-Evans is tackled at Suncorp.Credit:Getty

Manly’s 44-24 victory against Wests Tigers was their 11th from 14 starts and all of a sudden the top four is within reach. A home semi-final won’t be worth as much if the competition concludes in Queensland, but this result – coupled with a loss by arch-rivals Parramatta two days earlier – means it is attainable.

The Sea Eagles fielded their strongest side of the season, against a team that lost Alex Seyfarth and Luke Garner to leg injuries. It shaped as a mismatch and so it played out.

The Tigers’ unpredictability is as much a concern to their own coach as their opponents.

They chased their first kick of the match knowing they needed to present a straight line to Tom Trbojevic, who nearly sprinted away when confronted with a staggered one. Their short drop-outs were often aimed at the game’s tallest winger, Jason Saab. This is a side still struggling to get the details right.

The real coach-killing moments, however, came just before half-time. At that point, the Tigers were in control, leading on the scoreboard and in the possession stakes. For four consecutive sets they pressed the Manly line, yet appeared clueless as to how to breach it.

Bereft of ideas, they turned the ball over. No sooner had they done so, they conceded two long-range tries in as many minutes.

The advantage they had fought so hard to build was relinquished. Despite making just two errors and allowing just three opposition play-the balls in their quarter, they went into the sheds behind and, effectively, beaten.

“We actually had them under pressure there, we had a couple of back-to-back sets and then we had a scrum,” said Tigers coach Michael Maguire.

“We didn’t get the ball back in the last five minutes of that half and they scored two tries.

“Just before half-time, we were in the game but lapses within the game hurt us.

“We had good completions, we had good possession of the ball, but our execution at times was a bit clunky in attack when the opportunities did come about.”

This despite the best efforts of Adam Doueihi. Just like he did last week against Brisbane, he was scoring tries, setting them up, scoring or converting them. However, the ill discipline of his teammates was again apparent.

They could not contain Trbojevic, who scored his obligatory try and also ran for 271 metres. It was yet another sublime performance from a man who has made a mockery of stronger defences than this one.

Daly Cherry-Evans also scored two tries, due reward for his support play, as did Morgan Harper. In all, the men from the northern beaches crossed eight times.

This was an opportunity lost for the Tigers. If they had been able to maintain their early lead, it would have been a huge confidence boost before a run of seemingly winnable games against the Warriors, Bulldogs, Cowboys and Sharks. But for a team that shows so little resilience when the tide turns against it, there’s no such thing as a “gimme” game.

The IOC recently added “together” to its motto. It is evident the Silvertails are enjoying each other’s company in their new home after they put further distance between themselves and their horror start to the season.