Former NRL star Sam Burgess had four beers at a pub before telling his former father-in-law he was going to get him, a court has heard.

Mr Burgess was in Moss Vale Local Court on Monday, fighting two charges of intimidation and assault, after an alleged altercation with Mitchell Hooke, father of his ex-wife Phoebe Burgess, on October 19 last year. 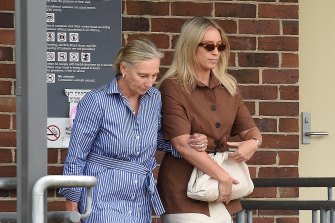 Ms Burgess was in the witness box for most of the morning and told the court how Mr Burgess had allegedly threatened her father.

"Dad said that Sam went off and he started storming around the house," she said. "Sam stood over him and told him he was going to get him."

Ms Burgess told the court the couple had originally arranged for Mr Burgess to have a two-hour visit at Mr Hooke's property from 2pm to 4pm on October 19 in Glenquarry in the Southern Highlands.

As a result, Mr Burgess allegedly went to the Royal Hotel Bowral for an hour and a half before the meeting.

The court was shown CCTV footage of Mr Burgess, a former South Sydney skipper, drinking at the pub from 12.06pm to 1.13pm. He could be seen talking and taking photos with patrons while consuming four beers.

Ms Burgess told the court how she had left the property ahead of the 2pm in an effort not to cross paths with Mr Burgess.

Ms Burgess said she visited Harris Farm in Bowral in the meantime, before parking in a nearby street where she could see Mr Burgess leave the property.

While waiting, Ms Burgess said she received a distressed phone call from her "emotional and shaky" father who allegedly told her that Mr Burgess had "finally" left and said, "He had wild eyes, but he came at me, I'm OK."

Ms Burgess said then she drove to the home to find her sister looking "white and shaky".

"She looked at me and told me that Sam had just gone off, he just went off," she said. "I then asked my Dad what had happened … his mouth was dry, he was shaken, I've never seen my father quite like that … he was wobbly on his feet."

Ms Burgess said she then took her father into his office to talk about the incident.

"He looked like he was having a bit of anxiety or panic attack," she said.

"He said as he [Mr Burgess] was leaving, he continued to yell out of the window … He said [to Mr Hooke] everyone that knows you hates you.

"At that point, I decided I was going to call the police."

Our Morning Edition newsletter is a curated guide to the most important and interesting stories, analysis and insights. Sign up to The Sydney Morning Herald’s newsletter here, The Age’s here, Brisbane Times’ here, and WAtoday’s here.

Soccer
Fans in stadiums will be EXEMPT from Tier 2 rules