Looking at Melbourne's players on paper, hearing Melbourne's bellicose words, you become easily convinced of the idea that playing finals is not sufficient for this team, they will be winning finals.

Then you watch Melbourne play. 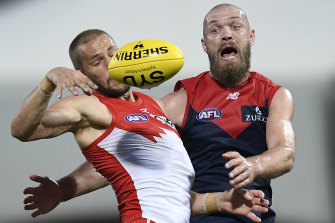 It is clearer now than even last year that the truest inconsistency of Melbourne is their performance is 2018. That was the outlier year to a modern history of mediocrity. And even that meritorious year ended in a humbling 11-goal loss in the preliminary final.

Last year's return to poor performance could be explained away as a young and self-satisfied group that relaxed after 2018, believing that they had arrived, and then suffered injuries. How many times did we hear of the off-season surgeries?

They reckoned that last year would ultimately prove to have been the aberration not 2018. Well this season has corrected that misapprehension.

Melbourne has some great players, some good ones and some ordinary ones. That's okay, all clubs have that, there are very few complete teams in the modern era of the draft and salary cap. Richmond too has ordinary players mixing with their greats but at Richmond they also mix with a system of play that compensates for personal shortcomings. Some of Richmond's ordinary players are now premiership players.

Finals had been within Melbourne's control only two games ago and then they lost those two games to two of the bottom six sides. 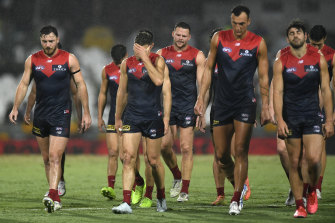 Despair: The Demons walk off the field after their round 16 loss to Fremantle.Credit:Getty Images

Simon Goodwin on Monday night said after the game that effectively killed off his side's finals hopes (or at the very least their ability to control their destiny) that the club had to become more ruthless.

It sounded good but, left hanging, it didn't really mean anything. Ruthless about what? Ruthless on the field? In team selection? In list management? Standards?

Was it more ephemeral than that? Was there a culture of not feeling worthy, of being a club that does not really feel it belongs in the finals so when presented with the idea of playing finals they choke?

We tried to speak to president Glenn Bartlett for his thoughts about this culture of immaturity and a lack of ruthless at his club but save for one bluster about Weeties packets and trashing the jumper Bartlett has been anonymous.

A ruthless analysis will condemn Melbourne most for its losses to Sydney and Fremantle by acknowledging that those two teams looked to be galloping past the Demons. The ruthless observation would be that they looked to be teams with desire, a plan and a style.

As clubs they played with, yes, a ruthlessness that the season might have ended for them a while ago as far as finals were concerned but small victories could be taken in any sporting contest. They understood that with less at stake than Melbourne in the grand scheme of this season and finals they would still play like there was more at stake.

Coaches of sides that miss finals are normally best advised not to encourage any talk of ruthlessness in decision-making but in current circumstances Goodwin might be right, Melbourne needs a ruthless appraisal of where they are at and why.