His off-field dramas are finally over, but Josh Reynolds now faces the challenge of trying to win a spot in Wests Tigers' first grade side.

Reynolds is in a fierce battle for a bench spot at the Tigers, with Billy Walters set to win the race for Robbie Farah's famous No. 9 jersey. 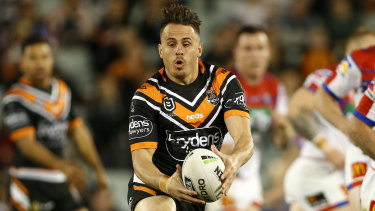 Josh Reynolds faces a challenge of trying to remain in the Wests Tigers NRL side for round one.Credit:AAP

The 30-year-old's NRL career was in jeopardy until assault charges brought against him by his former partner were dropped by police on Wednesday.

"Josh has been really professional the way he has gone about everything the past month, and it's great to see the smile on his face,'' Maguire told the Herald from New Zealand on Thursday night.

Late bloomer Walters, 26, could yet be pushed out to play the entire 80 minutes against the Warriors as Maguire and his famous father, Queensland great Kevin Walters, spoke about their big hopes for him this year.

"One thing Billy has done is put his head down and worked hard with the players and understand the combination s with the players – the little intricacies of what a No.9 does in the modern game are the things I'm looking for,'' Maguire said.

"Time will tell if he can get through 80 minutes, but he has a very good engine, and often led a lot of our drills. I'm looking forward to seeing him try and do that during the trial."

Kevin Walters told the Herald: "He's moved to the Tigers for an opportunity, he can play in the halves equally as good as he can at No. 9, I watched him trial last week and he was very good defensively and there were some nice little touches in attack as well.

"Now it's a matter of continuing that consistency, and if he can do that there will be some opportunities for him this year.

"By going to the Tigers, Billy not only gets to work with Michael Maguire but also Benji Marshall, one of the all-time great No. 6s. It would be great if he pick up three or four things from Benji. Benji is different to Cooper Cronk and Cameron Smith, but he has his own way of doing things and it's worked for him the past 15 years.''