Kalyn Ponga has escaped punishment from the match review committee after his shoulder hit on Michael Chee Kam was deemed "unavoidable",  while Chee Kam himself could incredibly be free to play for the Wests Tigers on Thursday night.

There were concerns for Chee Kam as play was stopped for more than five minutes on Friday night before he was taken from McDonald Jones Stadium on the back of a medicab and then straight to John Hunter Hospital. 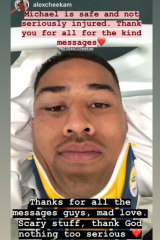 Michael Chee Kam let his teammates and fans know he was fine after he spent the night in John Hunter Hospital.Credit:Instagram

But the review panel felt there was no need to take the matter any further, sparing Ponga a charge and allowing him the chance to play against Manly on Saturday.

There were fears the Knights No. 1 would be in hot water, especially with the refetree's tough on-field action and the fact shoulder charges had been in the headlines during the week after Penrith's Viliame Kikau copped a two-match ban at the judiciary.

NRL head of football Graham Annesley told the Sun-Herald the Kikau and Ponga incidents were completely different, and what helped Ponga was his contact was "unavoidable".

Annesley said he could also understand why the referees gave Ponga 10 minutes in the bin once they saw Chee Kam sprawled out on his back as a result of Ponga's shoulder.

"The match review committee can look at the incident without any time constraints, and the one thing they need to determine is if the contact was unavoidable," Annesley said. "One player was trying to score and you had two other players trying to stop him, and in the course of that there was accidental contact from shoulder to head and they felt he couldn't avoid that."

"[Kikau's] incident you had a player pass the ball and was hit after he had passed the ball in general play.

"The match review committee has to determine if the contact was unavoidable, and they couldn't lay any blame on Ponga."

Kalyn Ponga, left, motions to the sideline after his hit on Michael Chee Kam.Credit:AAP

Ponga said he was unsure what else he could have done, and even quipped "maybe let them score, I'm not too sure".

"Obviously he was heading for the ball," Ponga said in the sheds. "I dived with the intention to bat it at first and then obviously saw that he was right there and braced for impact. I did hit his head which I'm obviously concerned about.

"But at the end of the day, I have to shield myself as well. Straight after he looked in all sorts. It was pretty bad. I hope he's alright now."

Knights coach Nathan Brown said: "It's not what cost us the game but I think Kalyn's playing fullback and he's making a play. He's got to make a play. He can't just stand there.