Dean Pay stopped short of confirming he will wield the selection axe over his misfiring Bulldogs but urged Canterbury fans to show patience with the wooden-spoon favourites after they crashed to a second heavy defeat in as many weeks.

The off-contract coach tried his best to put on a brave face after the Eels ran riot either side of half-time in a 36-16 win at ANZ Stadium on Sunday, plunging the Bulldogs to the bottom of the NRL ladder. 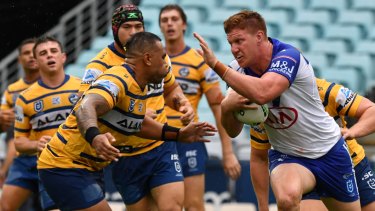 Dylan Napa was a rare shining light for the Bulldogs against the Eels.Credit:NRL Photos

Crippled by lingering salary-cap problems from last year, it seems a long road back for Pay and the family club with bookmakers quick to install them as the top pick to rack up the most losses in 2019.

Asked whether he would ring the changes for their clash against the Tigers at Campbelltown, Pay said: "We’ll address that during the week. We’ll see where we need to be better with our players. There’s a few guys putting pressure on them."

But it will be nothing compared to the pressure heaped on them externally if similar performances follow after they blew a promising start against the unbeaten Eels.

Early tries to Kieran Foran and Reimis Smith powered the hosts to a 10-point lead, but that margin was all but forgotten as the Eels raced in five tries in 21 minutes.

"We’ve got the youngest squad in the competition," Pay said. "We’re learning how to handle difficult situations and that’s where we need to be patient with these younger players. Hopefully, they’ll learn and be better with handling those situations.

"We need to make sure we build this team. Where it is, is where it is. We’re doing everything we can to build this team into one that can compete with the best teams in the competition.

"I thought our attitude was much better towards our footy [against the Eels]. There were a couple of intercepts and if we jag one of those we’re two points behind again."

The Bulldogs are anchored to the bottom of the NRL ladder as one of four winless teams alongside the Dragons, Sea Eagles and Titans. Of most concern for Pay will be the fact they've leaked 76 points in just two games.

Dylan Napa, who scored his first try in almost three years, was a shining light logging a team-high 164 running metres but watched on as the Eels set up their match-winning lead shortly after half-time.