The NRLW is poised to expand to six teams and have a longer season this year as the code plans for its most aggressive push to grow the women’s game in years.

Having been restricted to just four teams since the competition’s inception in 2018, the NRL is on the brink of adding another two teams to this year’s league before expanding again in 2022. 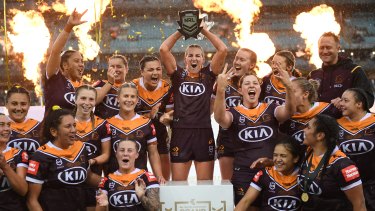 The sides only meet each other once in the round robin format with the top two teams qualifying for the grand final.

The format of the preferred six-team competition this year is yet to be determined with NRL chief executive Andrew Abdo to escalate talks with major stakeholders, including broadcast partners and potential naming rights sponsors, before deciding on the length of the season.

But the NRLW is destined to begin in the latter weeks of the NRL’s regular season, providing a greater platform to showcase the women’s game in the lead-up to the men’s finals series.

The players learnt the NRL eventually want to have every club represented by a women’s team, which will be a long-term plan.

The expanded competition is likely to be a potential lure for cross-code stars like rugby union sevens players Charlotte Caslick and Ellia Green, who used the banning of international travel last year during the pandemic to sign short-term NRLW deals. They had led Australia to Olympic gold at Rio in 2016.

Jillaroos pioneer Ruan Sims wrote in her Herald columns last year it was imperative for the NRLW to expand in 2021 if it wanted to continue to attract the best female athletes from a variety of sports.

The NRL will assess the candidates to be immediately added to this year’s competition after several expressed anger and frustration in 2018 when the NRLW was established with just four teams.

The decision aggrieved several clubs who had established women’s pathways programs, including the Sharks and Rabbitohs.

The NRL’s vision for the women’s game doesn’t just involve expansion of the elite competition, it’s also set to include a detailed blueprint about how to encourage more junior participation.